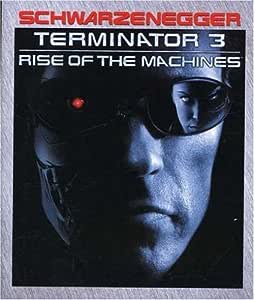 Terminator 3 - Rise of the Machines [Blu-ray]

A decade has passed since John Connor (NICK STAHL) helped prevent Judgment Day and save mankind from mass destruction. Now 25, Connor lives "off the grid" - no home, no credit cards, no cell phone and no job. No record of his existence. No way he can be traced by Skynet - the highly developed network of machines that once tried to kill him and wage war on humanity. Until, out of the shadows of the future steps the T-X (KRISTANNA LOKEN), Skynet's most sophisticated cyborg killing machine yet. Sent back through time to complete the job left unfinished by her predecessor, the T-1000, this machine is as relentless as her human guise is beautiful. Now Connor's only hope for survival is the Terminator (ARNOLD SCHWARZENEGGER), his mysterious former assassin. Together, they must triumph over the technologically superior T-X and forestall the looming threat of Judgment Day - or face the apocalypse and the fall of civilization as we know it.

4.5 out of 5 stars
4.5 out of 5
4,644 global ratings
How are ratings calculated?
To calculate the overall star rating and percentage breakdown by star, we don’t use a simple average. Instead, our system considers things like how recent a review is and if the reviewer bought the item on Amazon. It also analyzes reviews to verify trustworthiness.

lawrence chan
5.0 out of 5 stars A must watch in the Terminator franchise
Reviewed in the United States on November 18, 2019
Verified Purchase
It's a completely logical progression following the (original) first two, and IMHO everything after this was convoluted and made no sense whatsoever on every level.

The female terminator is spectacular and the fact that the array of advanced weaponry at her disposal as well as her enhanced armor and mimetic properties follows suit.

The chemistry between the principal actors Arnold Schwarzenegger, Nick Stahl, Kristanna Loken and Clare Danes is movie magic and the reprisal of Dr. Silberman by Earl Boen was beautifully executed comedic relief.

As usual, the cinematography and editing are flawless and the scripting is more than sufficiently engaging.

beowulf
2.0 out of 5 stars Pretty lame compared to the previous Teminator movies
Reviewed in the United States on December 7, 2020
Verified Purchase
I don't see any way that Nick Stahl's whiny John Connor could have evolved from the sassy impulsive adolescent John Connor that Ed Furlong portrayed. I cringed at the way Stahl portrayed him. Granted — the director probably made him act Connor this way, but it really really sucked. I lost all interest in him as a character. Claire Dane's portrayal of Kate Brewster is similarly one-dimensional. Arnold is Arnold, but even he wasn't strong enough to pull this movie through. James Cameron would have done a better job directing this movie. As it is, it's a hack job of sequel.
Read more
One person found this helpful
Helpful
Report abuse

Andrew H. Hale
5.0 out of 5 stars Killer Set Design
Reviewed in the United States on March 29, 2016
Verified Purchase
The story is good and the acting is good as well, but what really sets this movie apart is the set design and decoration - especially in and at the Crystal Peak VIP bunker. If you love underground bunkers then take 30 minutes and step your blu-Ray or DVD through the last 10 minutes of the movie and visually appreciate all of the nuances of the perfect 1970s bunker. From the period authentic props to the custom designed furniture to all of the hidden backgrounds including a botany lab to the water filtration purification system. So much work was done to achieve an authentic set and so few people will ever notice it. Great movie!
Read more
11 people found this helpful
Helpful
Report abuse

Gretchen
5.0 out of 5 stars Ordering was so easy a child could do it! ...
Reviewed in the United States on October 16, 2020
Verified Purchase
I gave 5 stars because it’s not Amazon’s fault that My child accidentally ordered this. I turned it off barely into the beginning when I realized it wasn’t iCarly. It didn’t occur to me until I saw the email just now that it was an actual purchase ...bye bye $12.99. I’ll be hiding the fire remote from her from now on.
Read more
One person found this helpful
Helpful
Report abuse

Ron H.
3.0 out of 5 stars "Desire is irrelevant, I am a machine..."
Reviewed in the United States on May 6, 2014
Verified Purchase
Okay, I admit, this movie is a bit of a turkey (at least compared to 1 & 2--which were off-the-chain AWESOME!!!) but, the original trilogy needed to close so the new level of post-Judgement Day movies could begin. That being said, my only real beef with this movie was that the kid John Conner in T2 seemed to have a bigger pair than Nick Stahl (I think I spelled that wrong--but who cares?) The point, they could have made him a tad more hardened---it couldn't have hurt the movie any more & it might have actually improved it--but I digress...
This show WAS needed to tie-up loose ends, but it could've been better. I did purchase the DVD version to complete my T-collection and the price was right. I thoroughly enjoyed the free watch on Amazon instant video that came with my purchase,
But, I gave this flick a 3-star because it wasn't quite as good as 1 & 2 which straight-up 5-stars and 3 deserved a 3-star and Salvation would be 4 1/2 stars due to it's epic story premise where the whole resistance/Terminator fight comes full-circle where man & machine must put everything on the line... that is the story.
But, don't take my word for it---check them all out for yourself.
Read more
4 people found this helpful
Helpful
Report abuse

Moviedude
3.0 out of 5 stars Decent movie, bare bones presentation
Reviewed in the United States on July 25, 2011
Verified Purchase
I wasn't a huge fan of T3 the first time I saw it. it's a much sillier film than 1 and 2, with more emphasis on action set-pieces than horror or character development. That said, T3 holds up a lot better to a second viewing than I expected. Arnold gets in some good one-liners, Kristanna Loken is suitably spooky as the T-X (a sort of hybrid of the T-800 and T-1000) and there's still a good mashup of CG and model effects. Watching this movie immediately after 1 and 2, it DOES feel like it fits in.

The whole package is pretty minimal. You get the typical less-plastic recycled material blu ray box with no liner notes of any kind, and the disk itself has no main menu- it launches straight to the movie and any special content must be accessed using the (decent) pop-up menu. This wouldn't be so bad, except this disk still blocks the player saving your position if you have to stop the film. WHY? You aren't skipping any ads or trailers by doing so; there are none. In terms of special featurs, you get a blooper reel, a smattering of trailers, Arnold's hilarious but inappropriate "Sgt. Candy" deleted scene, and a pretty worthy number of commentary tracks (which are still about the most interesting special feature in a movie IMO).

The transfer itself is decent, although it doesn't look nearly as sharp as T2 or many contemporary BDs. I'm not sure if this is a result of lazy mastering or just how the film is shot. T3 is very heavily processed for color in many scenes, and the outdoor shots are all desert and have a smudged, washed out look by design, so it may just not be a very sharp film. It certainly looks better than DVD, but not as clear as you might expect. Perhaps I'm just spoiled.

Overall I can recommend T3 as a worthwhile entry in the series, although not as compelling as any of the others. If you plan to collect the whole franchise, then T3 is a decent stepping-block to the fantastic Terminator: Salvation. If you're just in the market for a sci fi movie, you might want to keep moving, however; there isn't a lot about this film to attract new fans to Terminator.
Read more
3 people found this helpful
Helpful
Report abuse
See all reviews

Martin
4.0 out of 5 stars Good
Reviewed in the United Kingdom on August 14, 2018
Verified Purchase
A good follow-on to the first two of the Terminator series. The two main characters, John Connor and Kate Brewster, are both well played as of course are both the "cybernetic organisms" ... some great laugh-lines from Arnie, once again how he gets his clothes etc ... Also some good minor characters which always helps to give more depth; Dr Silberman, the "post trauma counsellor" for example ... Good but not as good as T1 or (especially) T2; however, after T3 the series drives over a cliff and self-destructs ... really sad after this one ...
Read more
5 people found this helpful
Report abuse

John Malcolm
4.0 out of 5 stars An unfairly much-criticised film
Reviewed in the United Kingdom on January 31, 2020
Verified Purchase
I like this film; the bad Terminator is ruthless and fun to watch, the stunts (especially the crane lorry) are great, and the main lead is real not CGI (which still, in my opinion, doesn't do human faces too well).

This review is for the HD DVD version, which I really suggest you don't buy unless you have a HD DVD player as I do* (few people have one (the old xBox 360 add-on drive is compatible AND will work with Windows (mine does), but may require a little work/technical to get the best out of it); it's a very obsolete format). Get the Blu-ray; if nothing else a Blu-ray has a much harder plastic compared to DVD or HD DVD, making it much more resistant to damage/scratches.

Kleanthis Tsapas
4.0 out of 5 stars Not the worst Terminator sequel.
Reviewed in the United Kingdom on October 10, 2019
Verified Purchase
Lots of people hate T3 but cmpare to the latest one Genisys .. this movie is just fine.It can't be compared with the 2 previous movies of course.T3 looks cheap and the casting is bad but it's not a waste of time and surely not the worst Terminator movie out there.
Read more
One person found this helpful
Report abuse

Amazon Customer
5.0 out of 5 stars Great movie
Reviewed in the United Kingdom on July 4, 2020
Verified Purchase
I bought this (along with 1,2 &4 ) for my husband who really wanted to introduce our 15 year old daughter to this cult series. They are thoroughly enjoy their daddy daughter time.
Read more
Report abuse

A. Murphy
5.0 out of 5 stars Super
Reviewed in the United Kingdom on March 8, 2020
Verified Purchase
Brilliant from start to finish. The ultimate female fighting machine with attitude to match .!
Read more
Report abuse
See all reviews