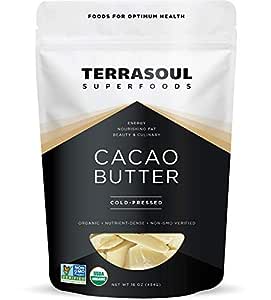 Save 10% when you receive 5 or more products in one auto-delivery to one address. Currently, you'll save 5% on your Dec 25 delivery.

Save 10% when you receive 5 or more products in one auto-delivery to one address. Currently, you'll save 5% on your Dec 25 delivery.

We'll send you a reminder before each delivery.
Save 5% now and up to 10% on repeat deliveries.
• No fees
• Cancel anytime
Learn more
Get it Monday, Nov 2
In Stock.
Qty:1
Deliver every:
2 months (Most common)
2 months (Most common)
Auto-deliveries sold by Terrasoul Superfoods and Fulfilled by Amazon
Share
Have one to sell?
Sell on Amazon

Ways to Use Terrasoul Cacao Butter

4.7 out of 5 stars
4.7 out of 5
2,644 global ratings
How are ratings calculated?
To calculate the overall star rating and percentage breakdown by star, we don’t use a simple average. Instead, our system considers things like how recent a review is and if the reviewer bought the item on Amazon. It also analyzes reviews to verify trustworthiness.

t
5.0 out of 5 stars score!
Reviewed in the United States on September 28, 2018
Verified Purchase
good gracious, i did not know this stuff existed- food grade cocoa butter, yum! i don't know what some other reviewers are tasting, but for me, a long-time chocoholic, this stuff is manna- tastes like the very best part of the essense of chocolate. a tiny, tiny bit melting in your mouth is so satisfying. i got it yesterday and have eaten a bit plain, put a bit in coffee omg! and made some body lotion that smells good enough to eat. the reason for only four stars* is that the packaging leaves something to be desired, since the 'zipper' on the bag already peeled off one side and so is already useless. the cocoa butter itself is small, irregular flat bits, from tiny to quarter-sized, broken pieces. i almost bought the other brand that sells this in rounded, uniform wafers, but it costs more and some of those reviews said that they ended up breaking those wafers into smaller pieces to use anyway, so i didn't see the need for uniformity. second, this product arrived with just some pieces slightly 'grayed', which happens to chocolate when it hasn't been stored in a temperature controlled place. then too, quite a few of the bits are stuck together on other bits, so it is clear this package hasn't been handled really well before arriving, but i don't think the taste has suffered for this, and so pretty sure this going to be a new thing i regularly order!
UPDATE: i was running low, and this time bought the round wafer brand. i used the last of my terrasoul brand yesterday in my coffee, as i do every day since buying it. this morning i opened the round wafer brand and got barely a hint of the delicious smell i was used to. put two wafers in my coffee and huh... did not melt as fast. did not leave a nice thick decadent oily puddle on top like this brand. did not give off that wonderful aroma i was used to at the first sip. taste was as scant as the smell. i added another wafer, but ho-hum, nope, no 'there' there.

i just re-ordered the terrasoul brand and will probably toss the wafers. i also upped my 4 stars to 5 on this product after that direct comparison with the other brand. even if the bag this comes in is not the best, the product definately IS.

Doug Green
5.0 out of 5 stars ho lee cow this stuff rocks
Reviewed in the United States on December 8, 2019
Verified Purchase
Got this to try and hop off using cream in my coffee for a while. it does taste great in coffee, I just shave some off in my cup, then froth away... I was not expecting my skin to react to this product! its chilly here in dec. so I take pretty hot showers, after I dry off I wait about 10 min before I need to start with the lotions for my dried out skin... 10 min past and the dryness didnt come.... it didnt come all day, not even my face needed moisturizer... My skin is actually shiney now like I just put on lotion. (this is my first day to use the product).. I do have about 5 cups of joe, but there isnt much in each cup... Im just blown away how it got to my skin so fast! Awesome stuff guys!
Read more

Saj P
5.0 out of 5 stars It tasted great, and is very high quality
Reviewed in the United States on January 31, 2017
Verified Purchase
This is my first experience using cacao butter to cook, as it's not available at grocery stores in my area. My 10 year old daughter decided to become vegan, and we made dark chocolate peanut butter cups with this butter. It arrived in big chunks, grated well, and melted smooth and creamy. It tasted great, and is very high quality. I will definitely be ordering this again.
Read more

SchultzsMom1129Top Contributor: Pets
5.0 out of 5 stars Great taste wonderful change for Bullet Proof coffee.
Reviewed in the United States on January 11, 2018
Verified Purchase
I received this package of Terrasoul Superfoods Raw Organic Cocoa Butter about an hour ago. I immediately opened the package and popped a small piece into my mouth to try it as I have never eaten just plain cocoa butter before and I live a Keto lifestyle. It had a very pleasant slight cocoa taste, and the texture was nice. The bag contains an assortment of sizes, and I just made a cup of coffee, and added a decent portion into my cup, the pieces all melted fairly quickly as I stirred, and I could immediately smell the combination of the coffee and cocoa, I added HWC and I am in heaven. Excellent product, and it arrived very quickly and well packaged. I am happy with the generous portion in the bag, and the price that I was charged for the bag was very fair. I received this package quickly thanks to my Amazon Prime membership. I will order this again, and also can't wait to make some fat bombs with it as well.
Read more
20 people found this helpful
Helpful
Comment Report abuse

Thomas
5.0 out of 5 stars Morning coffee
Reviewed in the United States on June 19, 2019
Verified Purchase
I am NOT very familiar with cocoa or chocolate things. But I am VERY familiar with COFFEE. I grind my beans for each pot and combine the beans of a VERY STRONG variety with a rather expensive "regular" Costa Rican bean. Well, for the first time I dropped a small chip of this cacao butter into my first cup and, man, am I blown away. I have come upon my favorite taste. The only trouble is, I allow myself only one small pot a day and only in the morning.
Read more
15 people found this helpful
Helpful
Comment Report abuse

Stormy
5.0 out of 5 stars Amazing for making homemade, healthy, low sugar chocolates!
Reviewed in the United States on March 4, 2020
Verified Purchase
This stuff is a great deal for the quantity, and definitely quality. It smells dreamy fresh out of the bag. I used it to make healthy, homemade chocolates as a Valentine's Day present for my hubby, who cannot have sugar. I added mint extract, cocoa powder, sunflower lecithin, salt, a pinch of coffee grounds pulverized, powdered monkfruit, powdered stevia, fiber sweetener, inulin, and some coconut milk powder to make it closer to milk chocolate as I can't have dairy and wanted to try some too. I melted it all together slowly and added it to silicone heart molds and let it harden. I can't believe how delicious it was! It tasted like legit chocolate and didn't melt immediately like some of the coconut oil versions I've attempted. I will be making this again and know where to come to purchase more cocoa butter!
Read more
7 people found this helpful
Helpful
Comment Report abuse
See all reviews

Page 1 of 1 Start overPage 1 of 1
This shopping feature will continue to load items when the Enter key is pressed. In order to navigate out of this carousel please use your heading shortcut key to navigate to the next or previous heading.
Back
Next
Pages with related products. See and discover other items: chocolate butter, raw butter, raw vegan chocolate, chocolate of cacao, keto friendly foods, Explore coconut mannas for cooking