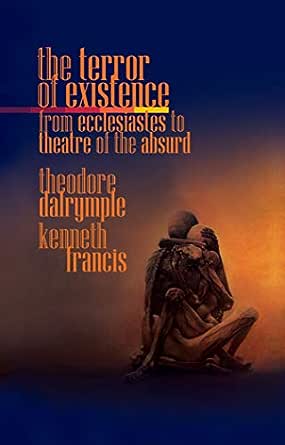 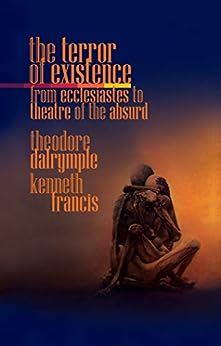 The Terror of Existence: From Ecclesiastes to Theatre of the Absurd Kindle Edition

Theodore Dalrymple is a Senior Editor at New English Review and is a former prison doctor and psychiatrist. He is also the author of more than two dozen books, innumerable essays, short stories and literary criticism.

Kenneth Francis is a Contributing Editor at New English Review. For the past 20 years, he has worked as an editor in various publications, as well as a university lecturer in journalism. He also holds an MA in Theology and is also the author of The Little Book of God, Mind, Cosmos and Truth.

smarmer
5.0 out of 5 stars Outstanding critique of our culture and where it is heading.
Reviewed in the United States on October 2, 2019
Verified Purchase
Another outstanding series of essays by the British psychiatrist and author, Theodore Dalrymple.. In this volume he uses key books as the starting point for cultural commentary. His co-author, Kevin Francis is also top notch.
Read more
5 people found this helpful
Helpful
Report abuse

Win Yerby
5.0 out of 5 stars Highly recommend -- provocative takes on loss of meaning
Reviewed in the United States on September 3, 2019
Verified Purchase
Extraordinary takes on great literary works by two fine wordsmiths. Concise essays make for a quick read but provide a great roadmap for some of the great works of the last 150 years or so.
Read more
6 people found this helpful
Helpful
Report abuse

Joel D. Hirst
5.0 out of 5 stars To find truth away from the absurd
Reviewed in the United States on January 15, 2019
Those of us who write know that we control the world. Alas those who wrote emptiness also knew this: Nietzsche and Freud; Marx and Gramsci. It is they who are the founts from which rushed forth such a crushing nihilism as we are forced to contend with today, though they are all dead; a nihilism which has become carnal and gross. As Aleksandr Solzhenitsyn said in his famed Harvard address, “Society appears to have little defense against the abyss of human decadence, such as, for example, misuse of liberty for moral violence against young people, such as motion pictures full of pornography, crime, and horror.” The ‘Theater of the Absurd’ we see played out on our college campuses and in Hollywood movies ratifies this; the bizarre and nonsensical and lewd only perhaps exceeded by an odd ‘moral’ indignation against, you guessed it, those who attempt to attain real morality (that which is conducive to a life more abundant). The meaninglessness of post-modernism, where we are all “wet robots made of meat” and not moral agents responding to something greater has taken us down a dark path indeed.

This Is what The Terror of Existence is about. But don’t fret, for it’s not a sordid tell all of the macabre but instead a series of lovely, thoughtful essays analyzing the great works of nihilist literature (yes, some of which even I like) and how they prepared the west for our uncouth postmodernism. It is about the horrors of existentialism described as they are even beautifully by that philosophy’s greatest apologists, yet nevertheless fetid as humanity attempts to play-act them out by doing “what is right in its own eyes” ignoring the glorious eternity which has been placed in the hearts of men.

Now there is a silver lining, because our nihilism has lost some of its ghastly glow. And thank God. Last night I was trolling through Netflix when I stopped (for some reason that can’t be forgiven) upon a Vince Vaughan “comedy”. Cheap laughs, some irrelevant nudity. Drunkenness and debauchery – but the most interesting thing was that the shtick was somehow tired, spent. The darkness had no motivation nor momentum. It was as if the entire cast and directors knew they were involved in a fraud but were nevertheless going through the motions in a strange Newtonian quest for nowhere which required no effort nor imagination, only surrender. “Think about it,” says Kenneth Francis in The Terror of Existence, “a hypothetical movie called The Wages of Pleasure, where four handsome men in two Mercedes Benz cars deliver body oils, perfumes and soaps to a coterie of young beautiful woman in a Playboy Mansion somewhere nearby on a paradise beach. A hollow, bland movie devoid of tension, suspense, action, suffering and fear.” Yes, that is the movie I watched; and that is the movie modern western society is desperately attempting to live – but to what end? They cannot say, so please stop asking.

Truly it is we who write who control the world. The most exciting thing about now, about our age is that after so long on the sidelines, playing defense against so great and alluring a foe, it is now those who write passion and truth who have seized the initiative. Oh, to be sure the nihilists use all the pressure of their not-insubstantial influence to deny us platforms, words, venues for debate – a debate which they so fear. But nevertheless the truth shines through; in writers like Theodore Dalrymple and Kenneth Francis in books like The Terror of Existence.

And for the politicians, you ask? Politicians follow the books; “they come later” as Ayn Rand said, only sitting down to a table that is already set by we who write the modern books for the rebirth of our great republic. Maybe it’s already happening? Because despite all the column inches, those oddly empty elected leaders who grace our magazine covers are not a threat, not really; the ideas which they argue in our terrible online agora do not convince for they no longer ring true, for their post-modernism proved wanting and their nihilism did not end up ushering in a “life more abundant” which they promised would come after the pulverizing of cities and the epic acts of collective suicide. Instead all that remains is hunger and emptiness, and that of a spiritual kind which lasts far longer than the flat bellies. No, we should not be concerned about “the stock of commonplaces, prejudices, fag-ends of ideas or simply empty words which chance has piled up within their mind(s)…” with which we must contend. They are not really worthy of the fight, a fight that has already been won; if only people would realize it.

So we keep writing and reading, knowing well that our time is coming – that perhaps it has already arrived.

Phil the John
2.0 out of 5 stars Postmodernism insights
Reviewed in the United Kingdom on July 22, 2019
Verified Purchase
Some interesting points by T.D., however Francis’s astonishing puerile attacks on postmodernism / thinkers was ridiculous.
It’s as if the Roman Empire, slavery and the crusades never happened.
The charge against postmodernism seems to be that this broad movement has had the nerve to challenge biblical ‘authority’ and the failure of the enlightenment / ideals.
Read more
Report abuse
See all reviews