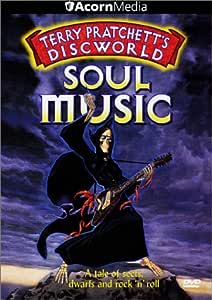 This animated version of the bestselling novel by parody master Terry Pratchett is a cautionary tale about the dangers of Rock Music--which in the Discworld is literally Music with Rocks In. A restless harp-playing teenager from the countryside is determined to become the Disc's greatest musician. His prospects look dim, especially after he forms a band with a rock-bashing troll and a horn-playing dwarf. Until, that is, he stumbles upon a guitar with a life of its own and renames himself Buddy. Meanwhile, reeling from big-time job stress, Death takes a holiday, leaving his teenage granddaughter to look after the family business. Like girls all over the Disc, she falls for Buddy, a problem since he's living fast and soon will need her professional attention. But while the beat goes on, no one (almost) is immune to its spell. 175 minutes.

3.9 out of 5 stars
3.9 out of 5
39 customer ratings
How does Amazon calculate star ratings?
Amazon calculates a product’s star ratings based on a machine learned model instead of a raw data average. The model takes into account factors including the age of a rating, whether the ratings are from verified purchasers, and factors that establish reviewer trustworthiness.
Top Reviews

pamela
5.0 out of 5 stars Happy purchase
Reviewed in the United States on August 11, 2019
Verified Purchase
Arrived quickly and expertly packaged. Item itself was in great condition and just as described. I am starting to really get into this series and am sad I did not discover it sooner. Glad I was able to find a DVD here. The animation was a little off putting at first, but I have grown to like it. More entertaining than the precise computer animations used more commonly today.
Read more
Helpful
Comment Report abuse

wiredweird
HALL OF FAME
3.0 out of 5 stars Too much to live up to
Reviewed in the United States on June 14, 2013
Verified Purchase
Terry Pratchett's books are among the best-loved in the world - if you don't believe the sales figures, spend ten minutes with a True Believer. That causes real problems for anyone trying to adapt his books to the screen. For one thing, the fans' expectations of the movie format are as high as the book set them. For another, each reader already has a mental model of the beloved text's characters and settings, and woe to any movie-maker who transgresses against the conflicting imaginations of all the readers.

That said, I really liked the live-action versions of Hogfather andThe Color of Magic. Unfortunately, they set the bar even higher for any video version of Pratchett's work. So, although "Soul Music" might otherwise have been a watchable enough low-budget animation, it just doesn't meet the standards already set by the book and by other movie adaptations. Even worse, it's broken up into half-hour segments that appear to represent the original made-for-telly format.

Recommended for the Pratchett completist or viewers with little or no Pratchett experience. Those of us in the middle ground of familiarity and fondness might not get the enjoyment from this that we had hoped for.

E. A. Solinas
HALL OF FAME
4.0 out of 5 stars Plenty of "Soul"
Reviewed in the United States on August 9, 2002
Verified Purchase
"Soul Music" features plenty of Discworld's most popular character: Death, the efficient-but-not-nasty Grim Reaper of Discworld. Full of jokes about "Music With Rocks In" and in-jokes about Discworld, this is a delight for kids and adults alike.
Ysobell and Mort Sto Helit die in a tragic carriage accident, leaving their teenage daughter Susan (Debra Gillett ) at a stodgy girls' academy in Anhk-Morpork. But unknown to Susan, they were also the adopted daughter and son-in-law of Death himself (Christopher Lee). Death is depressed by the loss of Ysobell and Mort, and at the advice of a slightly befuddled wise man, he takes leave of his duties in an effort to forget. His manservant Albert, a talking raven, and the Death Of Rats recruit the unwitting Susan to fill Death's place until he can be found. While Death gets drunk and joins the Klatchian Foreign Legion, Susan struggles to deal with the dead.
Elsewhere on the Disc, a young aspiring bard named Imp Y Celyn (Andy Hockley) leaves his dreary home for Anhk-Morpork, intending to become the greatest musician in the world. After gaining two bandmates (a dwarf named Glod and a troll named Lias Bluestone), earning the displeasure of the Music Guild, and losing his harp, Imp Y Celyn finds a magical guitar that produces amazing music -- by taking over all the musicians on the stage. The music ("Music With Rocks In") soon takes the Disc by storm. At the same time, Susan finds that Imp Y Celyn is supposed to die very shortly -- but something in the magic guitar doesn't want him to die. And, it turns out, neither does she...
The other Discworld production, "Wyrd Sisters," was extremely entertaining, but "Soul Music" surpasses it by having deeper issues in it, as well as the funny ones. Why do humans die? Is it better to die after a human life than an immortal, inhuman one? Interspersed are many old favorites such as the wizard-turned-ape Librarion, Colon and Nobby, Death of Rats, Albert, Binky the horse, Ridcully and his wizards at the Unseen University (Ridcully is the only one who hates Music With Rocks In), and many others. For rock aficionados, there are jokes about Elvis, the Sex Pistols, the Beatles, Buddy Holly, and many, many others.
Christopher Lee mixes the sublime and the funny as Death: he's alternately menacing (the time-travel scene where he menaces Mort), melancholy (the scene where he tries to explain to Susan why he couldn't save her parents), and outrageously funny, like the scenes where he is drunk, driving a motorcycle ("Oh bugger!"), or arguing with a wise man about the infinite ("What did it look like?" "It's blue." "It's black." "It's BLUE." "It's BLACK!" "From the outside, it's blue!"). Debra Gillet does a pretty good job with the difficult role of Susan, who initially seems very cold and unsympathetic, but gradually is revealed to be an ordinary girl with extraordinary abilities. Andy Hockley plays Buddy/Imp Y Celyn as a pleasant young man in the throes of an obsession, developing an unnatural link to his soul-sapping guitar. His two bandmates Lias and Glod are good foils for Imp Y Celyn, with Lias as the voice of straightforward reason and Glod the more cynical, twisted mind, but both of them good at heart. And any parents will sympathize with the frustrated Ridcully, who has to deal with a University full of music-crazed wizards, who are acting like unusually immature teenagers.
The animation is also slightly better than in "Wyrd Sisters." While it still has something of a crude quality, it remains more consistent from one to the next. One thing that may annoy viewers (and the DVD's biggest flaw) is that each part takes the viewer back to the menu rather than proceeding to the next part. Additionally, "recap" snippets and opening credits are present before every part, rather than just the first.
However, technical issues aside, this is a hilarious and touching story about life, death, Death, fate, magic, music, and Music With Rocks In. A must-see.
Read more
12 people found this helpful
Helpful
Comment Report abuse

kelly linss
5.0 out of 5 stars impressive
Reviewed in the United States on August 29, 2001
Verified Purchase
i was terrified that the cartoon could never be as good as the book but i must admit i was pleasantly surprised. some of the subtle nuances of the written word are lost but you also gain sight gags and facial expressions. also, you get to compare the artists' vision of characters and places with your own; the same with the voices.
the setting was well done. it was pretty much what i'd imagined: twisty, turny and in complete denial of the laws of physics. cheers.
as far as characters go, they really did a great job. death had me the most worried. how do you do the voice of a guy who TALKS LIKE THIS? but they did it and they did it well. imp y ceylon was a good composite of the more popular brit-rock stars with a pretty decent singing voice and the decision to make cliff sound like an old jazz man was brilliant. the animation was a bit simple (or so it seemed at first) but it really worked. there were some pretty creative shots and angles used that made the most of a simplistic style. i was also concerned that the music would be generic tv sitcom rock but i found myself wishing for a soundtrack. the songs eren't parodies, per se, but they were strongly reminiscent of music you know. each concert is a different sound: the stones, the beatles, jimi hendrix; it's all in there. but the one shining moment is hearing Buddy announce "we're more popular than cheeses." probably the finest animated moment ever.
if you pass up a chance to see this you're making a big big mistake.
Read more
6 people found this helpful
Helpful
Comment Report abuse
See all reviews from the United States

Richard
5.0 out of 5 stars The magic of music
Reviewed in the United Kingdom on December 26, 2005
Verified Purchase
A phenomenal interpritation of the book, with great rocks songs and generic humour.
Christopher Lee (who has always been my faviourite actor) is great as Death with a voice that hollow and exhausted. When Death is the most endearing being on the Disc, you know there's a problem with its people.
All the cast show great skill in interpriting the characters.
Read more
3 people found this helpful
Helpful
Sending feedback...
Thank you for your feedback.
Sorry, we failed to record your vote. Please try again
Report abuse