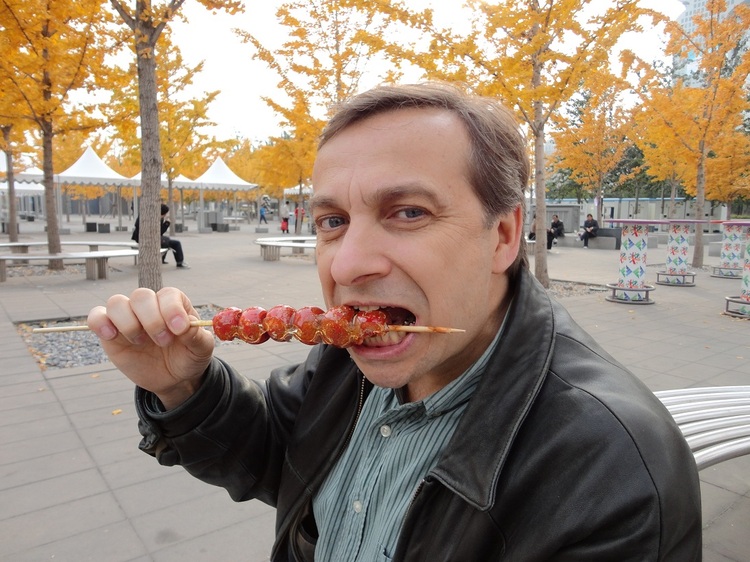 "I enjoyed this biography of Nikola Tesla immensely....The first thing one notices about this book is the book. The visual treatment of the subject and the story is unique...[with] excellent illustrations from publications of the day." (R.C. Larlham, author of The Old Man and Me)

"I love this beautiful book on Nikola Tesla....Nikola Tesla, brought alive by this book, will inspire followers from all over the world for many years to come." (R. Sun)

"This is a comprehensive and fascinating treatment of one of the most compelling yet enigmatic figures in American history." (John C. Wiegard)

The book is designed to appeal to general readers with a wide range of interests.

Like thrilling personality insights? The book is chock full of interesting stories on Tesla from his "100-bug-powered" windmills as a youth to his practical jokes on Mark Twain in his heyday to his dispute with Einstein as he entered his twilight years.

Into graphic novels? Tesla: The Wizard of Electricity includes many historical comics and photos to spotlight key events and figures in Tesla's spectacular life. The book is an amazing visual experience.

An invention buff? The book captures the prolific inventive mind of Nikola Tesla and how many of his inventions were so far ahead of their time that we are still today relying on his patents for new discoveries.

Turned on by conflict and tension? Tesla's life can be summed up by one of my chapter titles: "A Man Always at War." Delve into the complex relationships he had with Thomas Edison, George Westinghouse, Guglielmo Marconi, J.P. Morgan, and others that were sometimes colleagues, and sometimes rivals.

Prefer serious historical biography? Tesla: The Wizard of Electricity traces the great man's life from his childhood in the military frontier, through his schooling and employment in the grand capitals of Europe, to his tumultuous, yet most productive, years in New York City, Colorado Springs, Chicago, Pittsburgh, and Niagara Falls.

In short, the book provides insights into a man who has been largely ignored by history despite his huge contributions to modern life. A man who over 100 years ago anticipated that one day we would all be carrying around hand-held devices capable of instant communication across vast distances. Who a century ago promoted and developed renewable energy sources to replace fossil fuels. A man who left us a legacy that is just now being rediscovered by scientists, the public, and perhaps most ironically, pop culture.

David J. Kent is the author of two books on Nikola Tesla: "Tesla: The Wizard of Electricity" and an e-book, "Nikola Tesla: Renewable Energy Ahead of its Time," available for download directly from Amazon.com.

David has been a scientist for 30 years and regularly writes on the topics of science, travel, Abraham Lincoln, and Nikola Tesla. His website is called Science Traveler.
Read more
Tell the Publisher!
I'd like to read this book on Kindle

4.3 out of 5 stars
4.3 out of 5
27 customer ratings
How does Amazon calculate star ratings?
Amazon calculates a product’s star ratings based on a machine learned model instead of a raw data average. The model takes into account factors including the age of a rating, whether the ratings are from verified purchasers, and factors that establish reviewer trustworthiness.

William F
2.0 out of 5 stars Too Many Errors!
Reviewed in the United States on August 19, 2018
Verified Purchase
The book cover, binding, and paper are excellent, but this is yet another biography that has too many inaccuracies about Nikola Tesla. For example, the photo of Tesla's mother Djuka is actually Tesla's sister, Angelina. There's no documented proof that Tesla caused an earthquake or had an "earthquake machine." Longest spark Tesla produced was 32 feet, not 135 feet. Tesla's Paris lecture was given in 1892, not 1880. The German text from Goethe is incorrect. Tesla didn't transmit "millions of volts per second" through and around his body" at the Chicago World's Fair in 1893. Tesla's coils produced no where near 100 million volts. There was no documented exhibition of his remote controlled boat in Madison Square Gardens in 1898. The story of Tesla and Czito testing discharges off of the antenna of his magnifying transmitter is a complete fabrication...On and on...These distortions do not do Tesla any justice, nor do the authors that refuse to take the time to thoroughly research available sources and correspondence, to get his legacy told accurately.
Read more

Christopher L. Brockman
5.0 out of 5 stars Nicola Tesla was like a science fiction writer
Reviewed in the United States on August 23, 2016
Verified Purchase
Nicola Tesla was like a science fiction writer. He was endlessly inventive and forward looking, with many of his most creative ideas anticipating real future developments. He is credited with discovering wireless radio, xrays, AC electricity, hydroelectric power generation, and many other things we take for granted. He was also like a science fiction writer insofar as he didn’t have much interest of involvement in developing his ideas into commercial products. He was always busy with the next thing. In fact, he generally had several things going on at the same time. This lack of practical application is odd since Tesla’s background was in engineering, not really math or theoretical physics.

Tesla was also quite eccentric, which may or may not characterize science fiction writers. He completely eschewed sex or even romance, believing it would interfere with his research. He almost always dressed in formal attire and dined regularly at the finest restaurants, but he had little interest in money or possessions and in fact, died penniless. He periodically isolated himself in his hotel rooms, coming out only to interact with New York City pigeons, of which he was especially fond.

These things can be comfortably gleaned from David Kent’s Tesla: The Wizard of Electricity. Kent writes in easy prose that mirrors Tesla’s penchant for moving on to the next thing. He doesn’t belabor the science behind Tesla’s inventions, which is good for the general reader since there are many inventions to cover. He also doesn’t overanalyze Tesla’s personality and eccentricities, but strikes a nice balance between Tesla the inventor and Tesla the man. The result is a very readable but informative book.

The book itself is a bit eccentric in its design, capturing the substance and strangeness of Tesla. It’s hard covers is oddly thick and heavy, as if emphasizing it’s made to last. The pages are made to look as if they were very old and yellowing. Quotes are often presented as if on lined noted paper pinned to the page. The book is illustrated throughout, sometimes with old newspaper articles or comic strips. The whole design helps to get one into the rather funky spirit of Tesla.

This is an excellent way to discover Tesla, who aside from a car named after his, is largely relegated to the fringes of popular knowledge. It’s also calls up the great age of invention that gave rise to and characterized the 20th Century, a time of Edison, Ford, Westinghouse, Marconi, and many others, who gave us radio, electrification, the automobile, movies, and airplanes.
Chris Brockman

J Weaver
5.0 out of 5 stars Interesting
Reviewed in the United States on March 15, 2018
Verified Purchase
Purchased for my son, who works in the field of electricity and he loves it.
Read more
2 people found this helpful
Helpful
Comment Report abuse

Amazon Customer
5.0 out of 5 stars well formatted and objective treatment of a key scientist and engineer.
Reviewed in the United States on December 7, 2013
Verified Purchase
This is a comprehensive and fascinating treatment of one of the most compelling yet enigmatic figures in American history, the brilliant but highly unusual inventor and engineer Nikola Tesla. Tesla's realization of the potential of alternating current is the basis of the modern electrical grid, and he was on his way to inventing radio as well when a lab fire put him behind Marconi in that race.

This book is formatted as a documentary history, with original documents reproduced on its pages along with the author's commentary to add perspective and immediacy. Kent does an excellent job of sifting through the many earlier works on Tesla and presenting a focused and objective overview. He distinguishes between fact and opinion, and devotes a few pages to recounting and exploding conspiracy theories surrounding the subject. Kent does not avoid Tesla's later life, filled with disappointments- but he is right to credit him with key achievements, as well as visionary energy ideas that he never managed to bring to fruition, but which are only now reaching the real world in the form of solar and wind power.

This inspirational work may not be the final word on Tesla, but it is state-of-the-art. Best for high-school and up readers.

Dan
5.0 out of 5 stars WoW!!!!!
Reviewed in the United States on November 30, 2016
Verified Purchase
Everything you ever wanted to know about Tesla. This guy was phenomenal, a great person and a great scientists who had not received his credit due.
Read more
2 people found this helpful
Helpful
Comment Report abuse

er777
5.0 out of 5 stars HIGHLY RECOMMENDED!
Reviewed in the United States on June 18, 2015
Verified Purchase
A fabulous addition to all things Tesla - a great balance of information and visuals to inspire interest in this amazing man.
Read more
2 people found this helpful
Helpful
Comment Report abuse
See all reviews from the United States

Martin Vessey
5.0 out of 5 stars A fascinating book beautifully produced and Illustrated
Reviewed in the United Kingdom on August 4, 2017
Verified Purchase
A fascinating book beautifully produced and Illustrated. I find the way in which the pages are made to look like aged documents fits the story very well
Read more
One person found this helpful
Helpful
Sending feedback...
Thank you for your feedback.
Sorry, we failed to record your vote. Please try again
Report abuse

Nat
4.0 out of 5 stars good book
Reviewed in Spain on January 14, 2016
Verified Purchase
Good book, although I didn't learn anything new that I had not previously known. I'm used to read all about Tesla from my early ages so it is something normal. At least a third of the page space in the book is taken up with excellent illustrations from publications of the day. Kent does a good sifting through the many earlier works on Tesla, making it focused and objective overview, designed to appeal to general readers with a wide range of interests, but he left so many things out. Anyway I recommend it
Read more
Helpful
Sending feedback...
Thank you for your feedback.
Sorry, we failed to record your vote. Please try again
Report abuse

See all reviews from the United States
Pages with related products. See and discover other items: nikola tesla, tesla's inventions