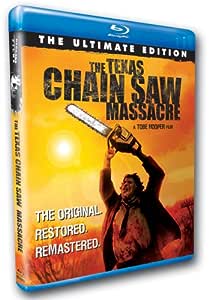 It has been called grisly, sick, and perverse," as well as raw, unshakeable, and the movie that redefined horror. It was attacked by churches, banned by governments, and acclaimed by only the bravest of critics. It stunned audiences worldwide and set a new standard in movie terror forever. In 1974, writer-producer-director Tobe Hooper unleashed this dark, visionary tale about a group of five young friends who face a nightmare of torment at the hands of a depraved Texas clan. Today it remains unequaled as a landmark of outlaw filmmaking and unparalleled in its impact as perhaps the most frightening motion picture ever made.

the Ultimate, the zenith, the most exhaustive possible celebration and dissection of this horror classic. I d even wager that no one will be able to put out a better one in the next 10 years --Fangoria

4.6 out of 5 stars
4.6 out of 5
65 customer ratings
How does Amazon calculate star ratings?
Amazon calculates a product’s star ratings based on a machine learned model instead of a raw data average. The model takes into account factors including the age of a rating, whether the ratings are from verified purchasers, and factors that establish reviewer trustworthiness.
Top Reviews

AMP
4.0 out of 5 stars Fresh from the Slaughterhouse
Reviewed in the United States on October 10, 2008
Verified Purchase
Review of the Blu-Ray edition (4 stars out of 5)

The Good Things
*Includes a number of special features; documentaries, deleted scenes, outtakes, and trailers.
*The movie is one of the freakiest ever made. It has some graphicness to it, but is not quite as bad as I thought it would be (newer movies like "Saw" are way worse). It achieves terror more through the creepy settings and unsettling ideas.
*Filming style is good. Has a lot of good camera angles and movements.
*Production design (for a low-budget movie) is good. The house they go to is the freakiest thing ever. Costumes are great. Make-up effects are great.
*Sound design is great.
*The story is simple, and straightforward.
*Characters are good and very well-acted. Writing is not bad.

The Bad Things
*Special features are in standard definition.
*Even though the blood and gore is limited, it is disturbing enough to scare some people away. Not reccomended to those who are easy to scare.

The Questionable Things
*The video quality on this disc is rather grainy and fuzzy. It has some cleaness, sharpness, and color to it, but its not the best. Still, the grain accentuates the film very well, and can be considered a good thing.
*Sound quality is okay.

This is truly one of the scariest films I've ever seen. Its creepy, unsettling, and intense. A definite precursor to modern films like "Saw," but without being overly graphic. This way, I see it as being very classy. Combined with a good cast of characters and a simple plot, its very effective. Everybody who can handle it ought to watch it at least once, for it is quite scary.

J-Dog
5.0 out of 5 stars ONE OF THE GREATEST HORROR FILMS EVER MADE!
Reviewed in the United States on July 17, 2012
Verified Purchase
This film is such a land mark in the horror genre; it single handedly created the slasher genre. Tobe Hooper created the concept of taking a handful of teenagers and facing them off against a larger than life antagonist whose sole purpose is their demise. But the film is not just blood and gore, there is also a strong psychological aspect of the film that plays with your head. Tobe Hooper takes the concept of family values and perverts them. The Sawyer clan is adjusted to the idea of cannabalism as a way of life, that it seems almost like a virtue to them. They are a traditional loving family with perverse anti-values that disrupts the minds of the movie viewer. The plot of this film would be duplicated in later films, such as "House of a 1000 Corpses." This film is a must have for any horror collector. Tobe Hooper would duplicate his success with "Texas Chain Saw Massacre 2," yet all other sequels afterwards would fall short, simply because no other director had the ability to create characters as rich and compelling as what Tobe Hooper. With that said "Texas Chain Saw Massacre (2004)" was a worthy remake. My advice to you is purchase "Texas Chain Saw Massacre," "Texas Chain Saw Massacre 2," and "Texas Chain Saw Massacre (2004).
Read more
2 people found this helpful
Helpful
Comment Report abuse

Travis
5.0 out of 5 stars Awesome
Reviewed in the United States on August 9, 2017
Verified Purchase
Always a fan of the classics. Buying this on blue ray was well worth it. Never would have thought it would make a difference. But it made a already great classic more amazing.
Read more
Helpful
Comment Report abuse

William Galvin Jr.
5.0 out of 5 stars Classic
Reviewed in the United States on February 13, 2013
Verified Purchase
As I try to explain to my young daughters what it was like to go to a drive-in theater back in the 60's and 70's, I reminisce on seeing movies like these. This particular copy is very good and the background material is exceptional, without being overly cumbersome. Strongly recommend this Blue Ray disc.
Read more
2 people found this helpful
Helpful
Comment Report abuse

specialkrp
5.0 out of 5 stars The horror film that changed a genre.
Reviewed in the United States on March 3, 2014
Verified Purchase
This is my favorite horror film of all time, and with this high-def transfer in full 1080 high definition the film can finally be viewed in all its grotesque yet beautiful glory. TCM is one of the most realistic and brutal horror films ever made. To me there is no comparison when it comes to true shock and awe in horror motion pictures. This film has had one other American transfer that helped the picture astoundlingly and the audio too. But, not until now does this 4k transfer finally let the viewer see the film like its the first time ever viewed. The audio sounds amazing when decoded with a DTS amp. And the picture has an amazing color to it, like the daytime scenes taking on an amber hue and the night time scenes take on a nightmarish blue cast to it. The picture in my opinion is perfect. This one is a must own for fans of this film or fans of horror films period. When I first saw this film when I was about 12 years old it stained my soul and gave me nightmares from that point on. Still to this day I have nightmares every now and then about old Leatherface chasing me through the woods with saw a buzzing (and I am 34 years old). Sweet dreams horror fans.
Read more
Helpful
Comment Report abuse
See all reviews from the United States

Jennifer Anderson
5.0 out of 5 stars Nothing beats the original!
Reviewed in Canada on September 12, 2013
Verified Purchase
I had watched the newest Chainsaw Massacre and wondered what the original version was like. I am a movie buff and think that originals are always the better movie (kind of like saying a book is always better of than the movie). This version may not have the affects of the newer one but it certianly did not disappoint.
Read more
One person found this helpful
Helpful
Sending feedback...
Thank you for your feedback.
Sorry, we failed to record your vote. Please try again
Report abuse