You've subscribed to Sunnydale Days! We will preorder your items within 24 hours of when they become available. When new books are released, we'll charge your default payment method for the lowest price available during the pre-order period.
Update your device or payment method, cancel individual pre-orders or your subscription at
Your Memberships & Subscriptions
There was an error. We were unable to process your subscription due to an error. Please refresh and try again. 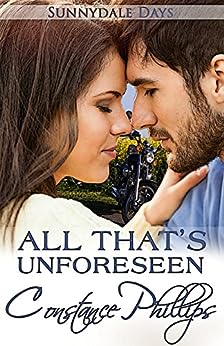 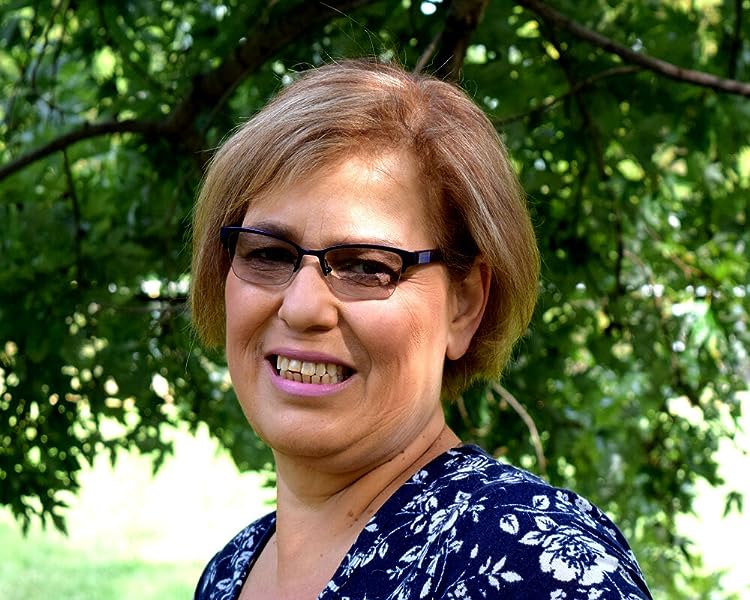 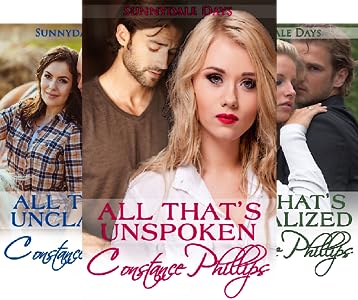 Constance Phillips lives in Ohio with her husband, daughter, and four canine kids where she writes contemporary romance novels and paranormal romance novels. When not writing stories of finding and rediscovering love, Constance and her husband spend the hours planning a cross-country motorcycle trip for the not-so-distant future…if they can find a sidecar big enough for the pups. --This text refers to the paperback edition.

Kindle Customer
VINE VOICE
5.0 out of 5 stars Not only was All That's Unforeseen wonderfully well-written but more importantly for me it was exceptionally ...
Reviewed in the United States on February 10, 2016
Verified Purchase
When I first started reading Constance Phillips latest book , All That's Unforeseen , I knew I was in trouble.
By the time I got to the end of the first chapter I was crying (and I mean full out sobbing my heart out) and had to put the book down and take a break before I could continue. Not only was All That's Unforeseen wonderfully well-written but more importantly for me it was exceptionally insightful and emotional it was as well. And for me especially it hit deep in my heart and wrong it like no other book I've read in a long time . These characters literally leaped out of the pages and wrapped around my heart and didn't want to let go.
Marilynn and her ex husband Dan's son , Joss, had Duchenne's Muscular Dystrophy that was slowly killing him as it attacked the major muscles and organs in his body. He was becoming weaker by the day and death was the inevitable outcome for him. The everyday struggles were hard for them both and ultimately killed their marriage.
Left holding the bag while Dan moved on with someone else Marilynn turned to Dan's best friend , Eli, for help.
Eli came running the second Marilynn called, not for his best friend or for the boy he considered his nephew, but for the woman he'd secretly been in love with his whole life .
As Eli helped Marilynn and Joss overcome what life had thrown their way ,their love continued to grow until he couldn't picture a life without her but Marilynn knew it couldn't last no matter how much she loved him. And she had to break it off before they all got hut, before he found out that she couldn't give him his dream of a houseful of kids, because she knew that there was a 50 % chance that any other children she had would have Joss's death sentence and she couldn't bring herself to do that to another child.
Would Eli love her enough to stay? Would Marilynn have enough strength to end things for good or even more strength to stay ?
The characters were all wonderfully well-written and had a depth that is beyond words , from Joss who knew he was dying and the way he faced it like the adults around him couldn't , to Dan who couldn't handle watching his son dying so he avoided him in order to avoid the pain , to Marilynn who loved her son enough to shoulder it all by herself and never complain and finally to Eli who took on the burden that was Joss and Marilynn without batting an eyelash.
These were just some of the characters that Constance Phillips did such a wonderful job of writing that I couldn't stop my heart from breaking at the same time it was falling in love with Eli and Marilynn.
I would honestly recommend All That's Unforseen to any and everyone. Not just for the love story of Marilynn and Ian but for the lessons about life and love that it teaches it readers.
Now a side note from me is the reason I cried so hard and felt such a deep and powerful connection to this book and these characters is because my big brother, David, was born with Duchenne's Muscular Dystrophy and we had the same struggles that Marilynn and Joss did , from crutches to walkers to wheelchairs to hospital beds for the house as his disease progressed, from lifts to get him in and out of bed, to the shrines making sure he got the wheelchairs he needed every time his disease advanced and a new version was needed. To us all arranging out school and work schedules so that someone was always there with him to finally our family bringing him home from the hospital to die so he wouldn't die alone in a hospital which was his greatest fear.
Reading how Constance Phillips wrote these characters and their lives and struggles was like reliving my childhood and like Marilynn and Eli did , we loved David and he taught us about love and acceptance like Joss taught all those around him. People used to ask if I wished he was normal, I always said he was normal. his life was normal for us as we learned not to be greedy, not to judge and to accept the hand that fate gave us like Marilynn and Joss accepted their fate.
So get you tissues ready cause your gonna need them and grab a copy of Constance Phillips heartwrenching romance ,All That's Unforseen and prepare to have your heart ripped out as you fall in love with Marilynn, Eli and Joss and know that these are characters that will stay with you long after you finish reading this story.
Read more
Helpful
Report abuse

Melissa Mendoza
4.0 out of 5 stars Beautiful!!
Reviewed in the United States on January 26, 2016
Verified Purchase
“She pulled her lower lip between her teeth, resisting the urge to guide him onto her lap and kiss him again, like they had the night before.”

After her son’s diagnosis with Muscular Dystrophy, Marilynn’s world slowly fell apart. Her husband left her and got remarried and now she’s lonely. In walks her ex’s best friend Eli. Eli has been in love with Marilynn since high school, but she only had eyes for her ex. But after a frantic phone call in the middle of the night, Eli runs back to Marilynn and everything after that is so beautiful!!

This book is so heartwarming and beautiful!! I love Eli and how compassionate and wonderful he was!! I think every lady needs a man like Eli in their lives!!

**Received a copy in exchange for an honest review. Read and reviewed by Melissa for Alpha Book Club**
Read more
One person found this helpful
Helpful
Report abuse

Demetra Toula Iliopoulos
5.0 out of 5 stars Love is seen
Reviewed in the United States on January 5, 2016
This is part of a series but first one I read . Gere Contemporary.
Hero is Eli and Heroine is Marilynn

Marilynn life fell apart when her husband walked out on her . Dan her ex-husband walked out on her when their son was diagnosed with muscular dystrophy. He count take the heartache know their son was going to die . Marilynn had to call an old friend one night when the sons lift broke . The friends name is Eli. Eli , Dan and Marilynn use to hand around together since high school .
Eli was shocked one night when he received a call from Marilynn . He was told that her sons lift needed to be fixed . She couldn't lift him to put him to bed . He was over to her house within Moments on his bike . After Eli fixed the lift he and the son finished watching football . Eli had fallen in love with Marilynn from the first moment he knew her . He didn't say anything because he didn't want to come between his 2 best friends ... Dan and Marilynn .
After the football game he but the son to bed . Eli and Marilynn had a talk. That is when Marilynn asked him why he hasn't be by to see her for 5 yrs. Marilynn told Eli that she didn't want to come between him and Dan . Eli don't realize it was that long . The son resents the father thinking Dan doesn't want anything to do with them. Especially when Dan remarries .
Eli starts to fix things around the house to make Marilynn and her sons life easier . He fixed the ramp on the Van. Eli fixed the railing on the porch . After a while Eli couldn't keep his feelings from Marilynn . Eli took a chance and kissed her .
Both get a surprise from the kiss . Also Marilynn told Eli why she won't have kids anymore . Grab it and find out why. Find out how Dan reacts once he finds Eli and Marilynn kissing
Read more
One person found this helpful
Helpful
Report abuse

Shweet Sandi
5.0 out of 5 stars Touching Book Very good read
Reviewed in the United States on January 6, 2016
All That's Unforeseen is one of those books that took even though it is not long 183 pages it took me longer than normal to read because it is a very moving book. One that had me stopping in points to think and wonder what I would do if I were in Marilynn's shoes.

I will tell you a little about the book. Marilynn was married but divorced because her husband left when he found out their son has muscular dystrophy. First class jerk right? That's what I thought too.
Marilynn calls an old friend from school to help her when she needed help with some things around the house for her son. You can see where this is going can't you and you can see what her son is going to think too.....

But all things are not black and white, things are shades of grey in every situation. This book is one of the best books I have read in a while. It had such depth of character and touched me. I look forward to more from Constance Phillips and I need to go and catch up with Sunnydale Days. This is one author I am glad I was given a book for an honest review. I would not have found her any other way.
Read more
One person found this helpful
Helpful
Report abuse
See all reviews
Back to top
Get to Know Us
Make Money with Us
Amazon Payment Products
Let Us Help You
EnglishChoose a language for shopping. United StatesChoose a country/region for shopping.
© 1996-2021, Amazon.com, Inc. or its affiliates