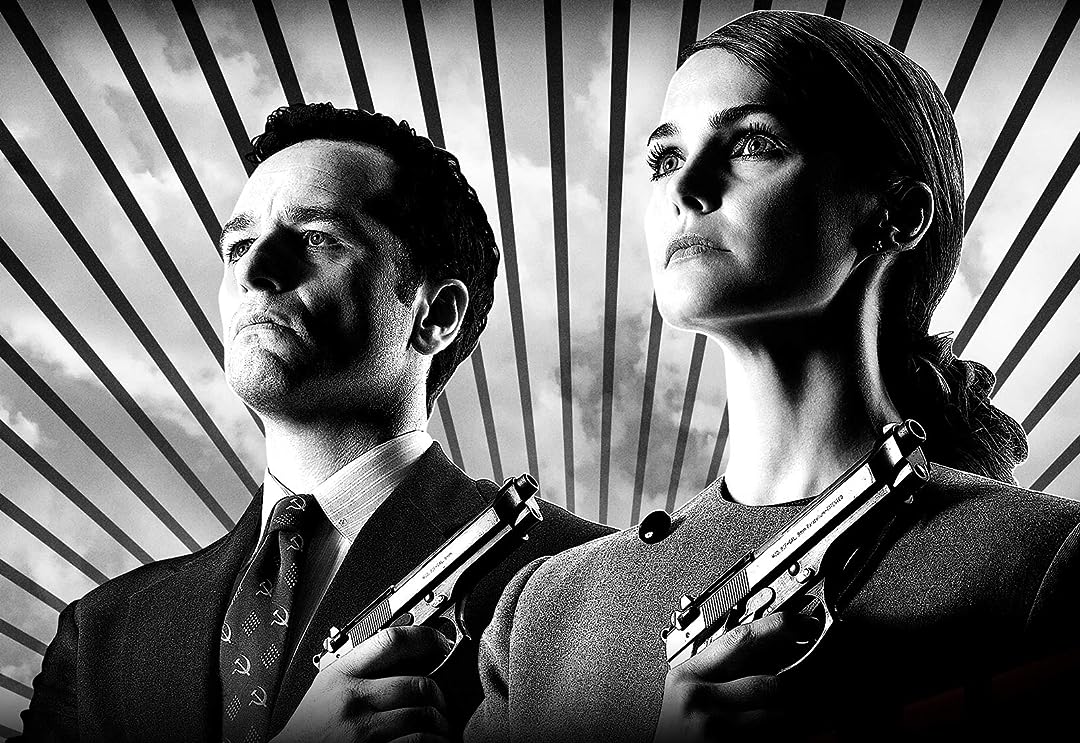 (11,621)8.42015X-RayNR
The Americans is an FX original drama about two KGB spies posing as Americans in the '80s. Fighting for Russia, they struggle with the KGB's intent to recruit their daughter.

ChuckBeattyxHOEYologist75to03Reviewed in the United States on December 6, 2020
5.0 out of 5 stars
Bought it due to intel community members giving it a high grade
Verified purchase
I guess one would have to work in FBI or CIA to know all the non-public details behind the story lines in this series.

As an old person today, my hope is our intel community and FBI members and leadership are of the highest principled persons. I conclude we need our best humans working in our countries', and in all countries', intel jobs.

They make so many decisions which the public cannot be let into the know about, so I conclude that our public faith has to be in the best possible persons to hold intel community jobs. Smartest and best, and most dedicated and versatile to do that business.

Rather than "deep state", I think our layman public faith ought shift to support and constantly wish for the smartest and brightest into our most sensitive govt agencies who hold great power to do things worldwide, etc.

Amazon CustomerReviewed in the United States on February 28, 2016
5.0 out of 5 stars
Everything is cool, but the set design.
Verified purchase
I do love this series. Seriously.
I don't even care that some of the actors talk with the fake Russian accent. It's understood. They live in States and they speak English all the time. So the native young could become somewhat difficult to manage. The make up on "Phillip" for all of his transformations is awesome.
The "only" thing I do not like is the way the set design in Soviet buildings is done. Guys responsible for that should be punished. I would do that myself if I may.
There are no IKEA style beds in Soviet prisons. There are no pillows in Soviet prisons. There is no way a person would be allowed to lay in bed during a day time in Soviet prison. There is no way anyone would be allowed to have a sport suite with the cord in a Soviet prison. There are no windows like that in any building from that period. There are no blinds on the windows. The glasses and cups people are using in Soviet research center do not belong there. There are no modular ceilings with easy access to the air conditioner system in Soviet buildings. There were no air conditioners. All ceilings are concrete.
How do I know all of it?
I was there. I used to live in that country and I know what it looks like. But, I guess the set designers didn't know I would be watching.
10 people found this helpful
Report abuse

ElizabethSReviewed in the United States on May 28, 2016
3.0 out of 5 stars
Going downhill
Verified purchase
Season 3 has gone downhill from the previous two seasons. For starters, there are too many storylines to advance at a reasonable pace. Things plod along. I thought we might get something to happen with Martha, but no, that's being dragged out. The only thing that has really happened is telling Paige about themselves. This series seems to have sunk to gratuitous violence and sex. The scene upstairs at the mailbot repair shop was totally unnecessary. How did that advance any of the myriad plotlines? The first two seasons seemed to have more spy action and intrigue. Now, it's all about family life and random assignments like the Afghans, the sub propellers, South Africa (really, what was that about?) And, of course, they had to set a man on fire AND listen to him scream on and on. What was the point? Maybe this is what the youth of America wants in a TV series?

This season went downhill. Slower. Less spy action. Too many plotlines trying to advance at once. Gratuitous violence (did I forget to mention Hans strangling the SA student forever?) I got the point long before the director did.

AviateReviewed in the United States on February 25, 2017
3.0 out of 5 stars
Amazing show, my binge ruined by no subtitles on Amazon though.
Verified purchase
I love this show and thus far it has me fully interested. This was up til I got to Season 3 and couldn't watch the first episode. They managed to add episode 1 back but then another problem reared it's head. There are no subtitles for the Russian spoken parts of the show. Usually I would maybe write this off and continue, however, just in the first episode alone you see a moment where Elizabeth is listening to something in Russian and you know it's important because there is a dramatic shift in the tone as she's listening. Unfortunately I have absolutely no idea what she is hearing as I do not speak Russian and I don't own a translation app. I contacted Amazon about this and I received a reply on 02/22/17. This is the segment pertaining to the issue, the rest was very courteous and apologetic.

"Earlier we were facing issue with the subtitles of this season and in order to resolve this issue, we have requested new content from content provider. This being the reason the season has been temporarily taken out of Prime catalog. We have been informed by the content owner that the new content would be available in a couple of days and we'll immediately add the content back to Prime catalog."

I was really hoping this would have been taken care of by now so I could continue to binge over the weekend but it seems it's still a problem. The other downside is that you can't even go to FX's website to watch this season anymore. It directs you to Amazon Prime. >.<
8 people found this helpful
Report abuse

LA55Reviewed in the United States on August 9, 2016
3.0 out of 5 stars
Not as good as the prevous seasons
Verified purchase
This season was good but not as good as 1 and 2. The writers focus way too much on the teenage girl which quickly becomes boring, in my opinion. Homeland made the same mistake in their earlier seasons.

The Margo Martindale character (Claudia), easily the most interesting of the series, doesn't appear in very many scenes . The rollercoaster relationship between Elisabeth and Phillip is overdone. The writers keep vacillating on whether or not the two characters love each other. I would say that this season focused on personal relationships more than spy missions. I prefer spy missions more than personal relationships; there is already enough of that material on TV. I would at least like a good balance between the two.

The actors did a great job with the material they were given. I would say that this season is worth watching but it doesn't have the same suspense as the previous two seasons.
8 people found this helpful
Report abuse

It turns out that the parents of the all-American family are actually Russian spies from the CBG, who infiltrated the U.S. as young adults, and have built their entire lives and family as Americans, while covertly working to advance Russian interests. The scenes where the parents/spies accomplish secret missions are thrilling and exciting, but the real drama comes where they maintain perfectly normal looking lives to the outside world, including hiding their true nationality and jobs from their two children.

In this particular episode, the father is stretched to his limits between the different women in his life. As part of his duties for the CGB, to compromise an American CIA employee, he has to woo her and actually become romantically involved with her, despite the fact that he has a very real wife - who knows all about his assignment. The parents actually have a real romantic relationship with each other, although when they became a couple years earlier it was all just for show as part of their duties as CGB members. Keeping his new "love" happy with a part-time relationship, when she wants to be with him every day as normal people do, while also keeping his wife and KGB partner assured that his interactions with the target are just an act, are almost too much for the father to bear, as they would be for anyone. Watching the dynamics between the couple and their family unit is fascinating.
3 people found this helpful
Report abuse

KGReviewed in the United States on August 22, 2015
5.0 out of 5 stars
"The Americans" comes of age
Verified purchase
This has always been a strong series: top notch acting, solid, smart writing, focused nimble direction. But this season the show took its game up another notch, by backing off from any action movie spy tropes, and focusing with even more of a laser beam intensity on complex, emotional issues of family, character, morality, and personal history.

In the past, there were always those occasional moments that felt just a touch 'Hollywood', but this year it seemed to stay much more firmly grounded in the possible and the real.

Delving into the idea of the daughter coming to understand and be unable to really digest just who her parents are added a heartbreaking human intensity. The FBI 'mole' story-line felt like what I imagine that paranoid world must really be like. And the 'robbery' episode with Lois Smith in an amazing guest appearance was one of the most affecting and chilling pieces of TV this year.

In joining the best shows at the very top of the current schedule, if "The Americans" hasn't quite graduated to "Breaking Bad" level brilliance, it's certainly came a lot closer this year, and left me very excited to see where the show goes next.
2 people found this helpful
Report abuse

HombreViejoReviewed in the United States on January 23, 2017
5.0 out of 5 stars
It is addictive. Real Drama, good scripts, good acting, not emptyless action like James Bond for the last 20 years.
Verified purchase
Developed by a former CIA operative, is the nuts and bolts of source development that includes the haywire family dynamics of a Soviet era cell in America. I don't want to give spoilers, it is best to see how things get unraveled by all concerned. Set in the 1980's era, there is more to work with because all the video cameras out nowadays would make the script unlikely.

For the past 2 decades our universities have admitted into our Computer Science/Engineering departments foreign baby dolls that get married to American engineer students and high tech professors. They become American citizens and if they have not written the computer code or worked on the engineering project they either have the passwords or crunch the statistical data. There is no cyber security, and no amount of money can buy it. There is no high tech secret. We pay for the groundwork, and they avoid the cost overruns. Great system.
Report abuse
See all reviews
Back to top
Get to Know Us
Make Money with Us
Amazon Payment Products
Let Us Help You
EnglishChoose a language for shopping. United StatesChoose a country/region for shopping.
© 1996-2021, Amazon.com, Inc. or its affiliates