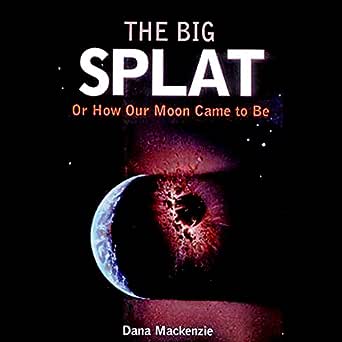 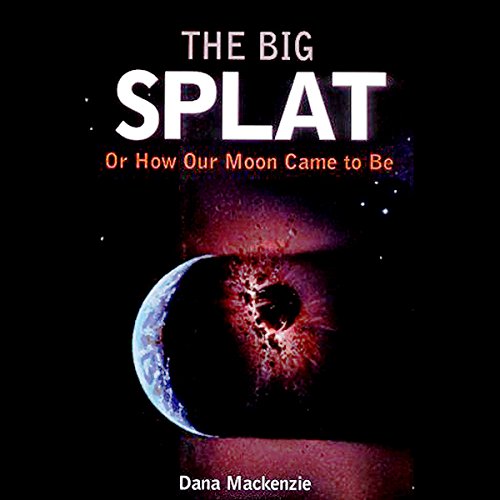 The Big Splat: Or How Our Moon Came to Be

The Big Splat: Or How Our Moon Came to Be
Dana Mackenzie (Author), Kevin T. Collins (Narrator), Audible Studios (Publisher)
Get this audiobook free.
$14.95/mo after 30 days. Cancel anytime

4.7 out of 5 stars
4.7 out of 5
27 global ratings
How are ratings calculated?
To calculate the overall star rating and percentage breakdown by star, we don’t use a simple average. Instead, our system considers things like how recent a review is and if the reviewer bought the item on Amazon. It also analyzes reviews to verify trustworthiness.
Top reviews

Robin Smith
5.0 out of 5 stars An unexpected gem.
Reviewed in the United States on August 31, 2019
Verified Purchase
Dana Mackenzie's book is quite interesting. He delves into the history of astronomy and the developing theories behind how the Moon is believed to have formed. The book has a lot of historical information that I had not heard before. I am an avid science history buff. I was excited to read the book in spite of my knowing how the story ends.

I would recommend this to everyone who shares my interest!

Integrity Reviews
5.0 out of 5 stars A wonderful book about the moon and its genesis
Reviewed in the United States on April 12, 2003
Verified Purchase
Dana Mackenzie has created that rare combination of a book both consistently entertaining and scientifically excellent. His theme is the evolution of theories about the origins of the moon. He sweeps the reader from Anaxagoras and Pythagoras to Newton to modern times. Explanation of the moon's creation was only recently made possible in part through powerful computer modeling and the Apollo space program's physical recovery and analysis of moon rocks. The story is fascinating and enlivened throughout by scientific mini-biographies, pithy discussions about the history of astronomy, and highly intelligent explanations of relevant principles of geology, celestial mechanics, physics, chemistry, and related sciences. The "Big Splat" refers to the overwhelming event which much evidence indicates really did create the moon - the oblique collision of another planet (the impactor) with the earth over 4 billion years ago, shortly after the genesis of the solar system. The evidence in support of this interpretation is compellingly presented, and the event itself summarized clearly and dramatically.
Those interested in science, astronomy, and the history of thought should place this book high on their reading list. It is hard to put down until finished. After reading this volume, few of us will ever again look at the moon without greater interest, understanding, and awe.

TheKnotGuy
5.0 out of 5 stars How did we get our moon?
Reviewed in the United States on January 8, 2020
Verified Purchase
This book was well written. It goes into detail about past history and brings it to current times. While there is technical detail, it is easily understandable.
Read more
Helpful
Comment Report abuse

Thomas M. Nathe
4.0 out of 5 stars Decent work for learning early lunar history.
Reviewed in the United States on April 5, 2013
Verified Purchase
The "big splat" hypothesis on how the Earth's Moon came to be, is the leading contender for explaining how our near double planet system came to be. Nicely written for those wanting a basic place to start.
Read more
One person found this helpful
Helpful
Comment Report abuse

Roger D. Launius
5.0 out of 5 stars Excellent Account of a Complex Scientific Story of Lunar Origins
Reviewed in the United States on November 12, 2007
If there is one dramatic moment--as opposed to myriad important but mundane events--in the history of lunar science it is the 1984 conference in Kona, Hawaii, in which scientists around the world presented papers on the sole topic of how the Moon originated. What made this conference so remarkable, however, was that a new consensus on the subject emerged through this process of presentation and discussion. Usually, positions are well known prior to any scientific meeting and few scientists change their minds right away. As the author of this outstanding popular history phrased it, "other specialists have to go home and process the new information. Old theories have to be sifted through and reappraised. More papers come out in favor of the new hypothesis, and others come out against it. Eventually, sometimes after many years, a new consensus emerges" (p. 167). Not so at Kona. The consensus on the origins of the Moon that came about there has enjoyed remarkable exceptional staying power since.

"The Big Splat: Or How Our Moon Came to Be" by Dana Mackenzie is a concise and exceptionally readable account of how a significant but divisive scientific question came to be settled through the investigation of the Moon made possible by sending human and robotic missions there in the 1960s and 1970s. The Kona conference established a consensus in favor of a theory of origins known as the "big whack," or "big splat." Two scientists working independently, William Hartmann and Alastair Cameron, first advanced the theory in 1974 that the Moon had been formed by debris from a massive collision with the Earth about 4.6 billion years ago. This theory was predicated on the study of lunar rock and soil samples returned from the Moon by the Apollo astronauts, and over the course of the next decade further analysis allowed scientists to resolve most of the questions plaguing other theories of lunar origin by applying the "big splat" hypothesis.

So contentious had the question of lunar origins been prior to the Apollo program, as Mackenzie shows, that many scientists just threw up their hands in frustration at ever being able to develop a reasonable hypothesis. Confusion ruled among scientists about the Moon's origin as competing schools battled among themselves for dominance of their particular viewpoint in the textbooks. Indeed, some expressed concern that determining the Moon's origins should be the single most significant scientific objective of Project Apollo, thinking of it as a hopeless objective.

Their concern was legitimate based on what had gone before. Prior to the Apollo missions the origin of the Moon had been a subject of considerable scientific debate and careers had risen and fallen on championing one or another theory. Prior to the 1960s there had been three principal theories:
1. Co-accretion--a theory which asserted that the Moon and the Earth formed at the same time from the Solar Nebula.
2. Fission--a theory that asserted that the Moon split off from the Earth.
3. Capture--a theory that held that the Moon formed elsewhere and was subsequently drawn into orbit around the Earth.
The data supporting these various theories had been developed to an amazingly fine point over time but none of these theories actually explained enough open questions to convince a majority of planetary scientists.

As Mackenzie recounts in "The Big Splat," the new and detailed information from the Moon rocks pointed toward an impact theory--which suggested that the Earth had collided with a very large object (as big as Mars and named after the fact "Theia")--and that the Moon formed from the ejected material. This proved to be a theory that fit the fact that although the Earth has a large iron core the Moon does not, because the debris blown out of both the Earth and the impactor would have come from iron-depleted, rocky mantles. Also lending credence to this theory, although the Earth has a mean density of 5.5 grams/cubic centimeter the Moon's density is only 3.3 g/cc, which would be the case were it to lack iron, as it does. The Moon has exactly the same oxygen isotope composition as the Earth, whereas Mars rocks and meteorites from other parts of the Solar System have different oxygen isotope compositions. While there were some details to this theory that have yet to be worked out, the impact theory came out as the consensus at the Kona conference and is now widely accepted. In the end, further research will be required but all evidence to date seems to fit into the confines of this giant impact theory.

"The Big Splat" also offers a wonderful affirmation of the scientific method as a self-correcting system of knowledge. Clinging to the marketplace of ideas, it insists that practitioners explicate their theories in a manner that is rigorous, peer-reviewed, and replicable. In all cases, the mode of science is to seek to disprove or at least modify these new theories. Doing so helps to self-correct the state of knowledge, and there is no higher calling in science. Of course, this road to scientific understanding is rugged and winding, and "The Big Splat" states this well in the context of lunar origins. What we learn is that scientific understanding is infinitely more complex, convoluted, interesting, and significant than most popular conceptions allow. Dana Mackenzie is to be commended for showing this process in detail and in so doing restates the positive nature of the process. Apply this case study to the major scientific debates of the present, of which there are many, and it is apparent that there are few easy answers.

Dana Mackenzie has written as fascinating detective story in which scientists act as Sherlock Holmes deciphering discreet but imperfect clues to piece together the set of incidents that led to the formation of the Moon. "The Big Splat" is a wonderfully written science story. It will be of interest to historians, non-specialist readers, and students of all types.

Amazon Customer
5.0 out of 5 stars Excellent
Reviewed in the United Kingdom on May 21, 2017
Verified Purchase
Excellent. Just what I needed.
Read more
Report abuse
See all reviews