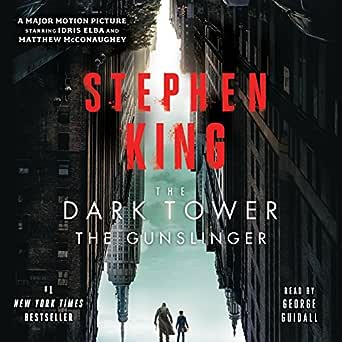 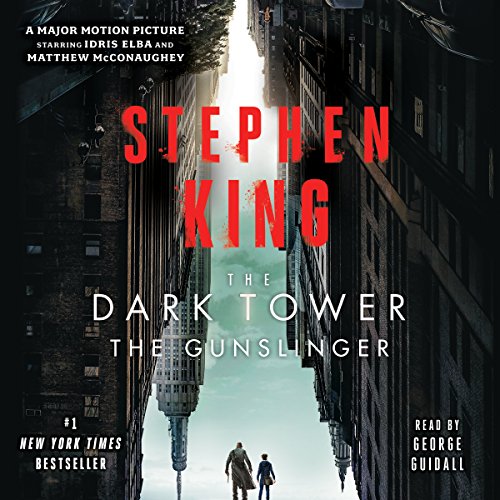 The Dark Tower I: The Gunslinger

List Price: $18.89
You Save: $0.94 (4%)
By completing your purchase, you agree to Audible’s Conditions Of Use
Sold and delivered by Audible, an Amazon company

4.4 out of 5 stars
4.4 out of 5
6,252 global ratings
How are ratings calculated?
To calculate the overall star rating and percentage breakdown by star, we don’t use a simple average. Instead, our system considers things like how recent a review is and if the reviewer bought the item on Amazon. It also analyzes reviews to verify trustworthiness.

Cate
1.0 out of 5 stars WTH
Reviewed in the United States on November 16, 2018
Verified Purchase
I am an avid reader, approximately 100 books per year on a variety of topics and themes. I have to say that The Dark Tower I: The Gunslinger is one of the most unreadable books I have ever encountered. I powered through over half of the book before I asked myself; WTH am I spending my time reading this nonsense. I will never attempt to finish this book due to the intense boredom of it. I can't say more than that except don't waste your time.
Read more
54 people found this helpful
Helpful
Report abuse

While reading this book, it almost seemed like the author was creating confusion and misery for misery and confusion’s sake! Why would you do that in the first book of a series? If Stephen King’s name wasn’t on this book, I sincerely doubt most readers would have finished reading it. That said after completing the book I googled it and found King’s fans encouraging people to “power” through the book because book two is good, while on the same page I found others talking about underage sex that is weird in further editions of the series. This leads me to one question:

“Why did you create such frivolous misery in your novel Mr. King?” Apart from Jake, it just seems like pain that neither builds the character, nor furthers the story. It is, to me, uninteresting and does nothing but sear and jade your reader’s imagination.

This book was much less interesting than some less known/self-published smaller authors today like AC Cobble, Peter Flannery, A.G. Riddle and others. In fact this being the first Stephen King book I’ve ever read, I was left wondering if the only reason he has been so popular was due to the advertisements of his brand over the years. After all, prior to Amazon a writer could not easily get their works known or published. I now wonder if King is really deserving of his lofty place amongst well known literary authors.

The final quarter of this book from the flashback of Roland’s “coming of age” through the cave onward was decent and even good occasionally, but prior to that I wanted to stop reading the book several times.

Maybe my review is unfair, but this doesn’t seem like a work worthy of one of the past century’s most popular authors. Read it if you must, or just read the cliff’s notes version and save yourself some pointless misery.

Frank Watson - Writer
4.0 out of 5 stars Fascinating Book Starts King's Epic Series
Reviewed in the United States on February 3, 2019
Verified Purchase
Stephen King says he started his epic series, THE DARK TOWER, when he was a very young man. Perhaps with the arrogance and/or enthusiasm of youth this series is a mash-up of any number of literary traditions. In most hands it could have wound up a mess.

THE GUNSLINGER, the first in the series, opens, appropriately enough, with “the gunslinger” chasing an unidentified man across a nameless desert:

“The man in black fled across the desert, and the gunslinger followed.”

The scene has the look and feel of an old spaghetti western, which King freely admits:

“… I realized that what I wanted to write was a novel that contained Tolkien’s sense of quest and magic but set against Leone’s almost absurdly majestic Western backdrop.”

I think he succeeded:

“The desert was the apotheosis of all deserts, huge, standing to the sky for what looked like eternity in all directions. It was white and blinding and waterless and without feature save for the faint, cloudy haze of the mountains which sketched themselves on the horizon and the devil-grass which brought sweet dreams, nightmares, death. An occasional tombstone sign pointed the way…”

The Gunslinger (eventually we learn is name is Roland – an epic/mythic/heroic name) comes across a mysterious young man who has somehow been transported from (our) contemporary New York to this strange land. No attempt is made at explanation.

When Roland comes to a town, we learn that this is post-apocalyptic time in which the world as we know it has been destroyed, possibly though nuclear war. It is a dystopian vision that predates the current popularity of such stories.

As the journey continues, old-fashioned magic becomes part of the mix. Also a bit of derring do in the style of Indiana Jones. Also some fantasy in the vein of George R. R. Martin’s “Game of Thrones” (“Winter is coming.”)

And, of course, questions of good versus evil are explored.

Any type of cross-genre mixing is difficult to do well, much less on an epic scale. I have not even looked at subsequent books in the series in the hopes of being continually surprised when I do read them. I expect this volume is a good launch. If anybody could make it a success it would in the hands of Stephen King.
Read more
20 people found this helpful
Helpful
Report abuse

Annie Weaver
1.0 out of 5 stars Stephen King, you’re an excellen writer, why would you mess with perfection????
Reviewed in the United States on October 17, 2018
Verified Purchase
Once one of my all time favorite books.
Stephen King revised this book and it is TERRIBLE!!! You get no back story and don’t know who some of the characters are, how they played a roll in Roland’s life, what he went through to get to where he is now. NOTHING!!! It is terrible!!
Read more
20 people found this helpful
Helpful
Report abuse

Emanuel Lopez
5.0 out of 5 stars Third Time Journeying To The Tower
Reviewed in the United States on September 2, 2019
Verified Purchase
I like how King explores string theory and parallel universes here. This story is like a perfectly balanced soup we sometimes eat at a restaurant that's not too much of this or where it's not lacking in that. The mixed in genres, The Hobbit, King Arthurian legend, Doc Holiday, Biblical references and of course, horror are beautifully written. He weaves in other stories in here like, The Talisman, Insomnia, IT, and even Pet Sematary, (the dark magic Crystal that let you travel to the land of the dead in his later D.T. volumes). The villains in these series are as intriguing to me as the enigmatic, archetype gunslinger is. And they range in variety as they do in lethality. Werewolves, ghosts, skin changers, artificial intelligence robots & trains, demons, rogue gunslingers, witches, evil men, sorcerers, were-spiders and even creatures related to Pennywise the clown. I suppose that like Roland, if you don't have much of an imagination, then you should read a senseless love novel where there's infidelity like in these tube soap operas and silly reality t.v. shows where people make a fool of themselves on national television.😂
Read more
9 people found this helpful
Helpful
Report abuse
See all reviews

Louise886
5.0 out of 5 stars The start of the Dark Tower journey
Reviewed in the United Kingdom on January 16, 2020
Verified Purchase
This is my second time re-Reading the dark tower series. The first time I read this book I found it very hard to follow. The second time I enjoyed it far more.

The gunslinger is following the man in black across the desert. It is meant to be a world different to ours which is old. There are some links to our world and some parallels.

If you are a King fan then the Dark Tower journey is an absolute must!
Read more
7 people found this helpful
Report abuse

Djgos
4.0 out of 5 stars Hard to know.......
Reviewed in the United Kingdom on September 10, 2020
Verified Purchase
I am afraid to allow myself be drawn into this series. I have read all nine (I think) of Donaldson's Thomas Covenant story, and the five of his space series (the name eludes me) and I'm not sure either was worth the time. Great vision and interesting stuff, but man were they heavy and loooooong! I'm pretty sure that Dark Tower series is similar.......

As a book I really enjoyed The Gunslinger. It is soo of the 70's and expanding the consciousness, yet still very Stephen King. I'm glad I read the revised version as the original, based on his foreword, mist have been been hard going at times.
Read more
One person found this helpful
Report abuse

Jonathan L.
5.0 out of 5 stars Gripping, brutal, best fantasy book I’ve read in years
Reviewed in the United Kingdom on November 9, 2018
Verified Purchase
I’ve lost track of how many people recommended The Gunslinger to me - as a fan of Westerns and Tolkien this is right up my street. Finally took the plunge on the Kindle Edition and enjoyed every word.

It’s a masterpiece, the setting is fantastical but grounded enough to make it really easy to visualise. Action is fairly rare but is written breathlessly and punchily, you can imagine every shot right down to the feel of the hot shell casings and the sound of the guns. Characters are great, the foreword is really illuminating - basically I’m hooked. Count me in for the rest of the Dark Tower!
Read more
3 people found this helpful
Report abuse

stuart Thompson
4.0 out of 5 stars Bonkers but brilliant
Reviewed in the United Kingdom on August 7, 2017
Verified Purchase
I had never read King before but took a chance on this series after reading reviews about the upcoming movie, which where negative but said consistently the books are engrossing. This is exactly what I found to be the case and enthralling pseudo western world with this first book full of intrigue, mystery and flash backs. Now onto book two!
Read more
6 people found this helpful
Report abuse

Declan
5.0 out of 5 stars Memories of time passed on
Reviewed in the United Kingdom on December 18, 2018
Verified Purchase
This is my fourth journey to the Tower and like all journeys it begins with one small step. But what a step, Sai King is still the master storyteller and I , a constant reader , must continue to find new joys in old words . I shall , before I reach the clearing at the end of the path , return again , because this book is worth every second it takes to read it .
Read more
3 people found this helpful
Report abuse
See all reviews