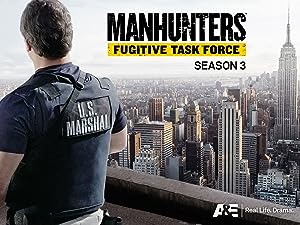 (131)8.02011TV-14
When law enforcement needs to catch the nation's most dangerous fugitives, they call the ultimate "manhunters," the elite agents of the U.S. Marshals Fugitive Task Force. Mandated by U.S. Congress after 9/11, the Task Force is made up of multiple federal, state and local agencies, and has the unique ability to transcend jurisdictions, towards the common goal of catching violent fugitives.

Name HereReviewed in the United States on April 5, 2014
5.0 out of 5 stars
real
Verified purchase
I enjoy this series because it is not necessarily spellbinding or nail biting, but involves real mortals in the real process of apprehending malefactors under situations that actually exist. Sure I enjoy British mysteries and the usual crime thriller, but from time to time it is a relief to turn to a series like this where the cops drink a lot of coffee and spend more time watching a house with binoculars as traffic moves by and pedestrians walk by on their way to work than doing humanly impossible heroic stuff.

nurse_judithReviewed in the United States on June 12, 2014
4.0 out of 5 stars
GREAT TEAM....GREAT ACTION...GREAT ARRESTS
Verified purchase
This season 3 of Manhunters was very interesting and exciting. I liked all the "real" U.S. Marshals and police agency's out of NY and NJ. They risked their lives to take down the bad guy's. All in all it was good, fast action. The one thing that slowed it down was when the exact same words and show were repeated...like they spliced the film together where a commercial probably came in on the TV version.

Jeffery MingoReviewed in the United States on February 26, 2012
4.0 out of 5 stars
Hate & Love Amongst da Sistuhs
Verified purchase
A Black woman slices the face of another Black woman. It takes 30 scars to fix and the victim will have that slash for the rest of her life. The Marshals go to Upstate NY to solve this one.

This has a scene similar to one in the film "About Schmidt." Remember when Jack Nicholson's character remembers his birth home and it's now a tire store? Well, one officer remembers his early time in Utica. They show a photo of his uncle who also worked in law enforcement, and he had a deep, juicy, Kirk Douglas-like butt chin. If you love the saucy, burrough-oriented flavor of this show, you may miss it as the LatinA officers from other seasons aren't here. Still, if you like those "Sopranos"-type East Coast accents, you'll hear a lot of it here.

On the one hand, this was a blackchick-on-blackchick crime. How could a sistagurl do that to one of her own!? However, in the course of this episode, two other Black women try to hide/protect the perpetrator fiercely. Their loud and belligerent behavior just reinforces sistagurl stereotypes, however. So there is some unity amongst da sistahs here, but it's used to protect an individual who was in the wrong, sadly.

Luckily, the perpetrator gets a heavy punishment. The episode concludes with the victim learning that her assailant was captured. I too concur that "people are people," but wearing an Afrocentric and womanist hat, it can be saddening to hear and see the facts presented in this particular show.

Amazon CustomerReviewed in the United States on May 12, 2021
5.0 out of 5 stars
Love it!
Verified purchase
Wish I could find the DVD’s. Great show. Incredible group of officers from various law enforcement branches. They are special! Love this show!

KimberlilyReviewed in the United States on January 28, 2014
5.0 out of 5 stars
I love this show!
Verified purchase
I grew up watching Cops as a teenager. Something about catching people that break the law is thrilling go me. Manhunters is the older cousin of Cops. Manhunters catches fugitives that know they have broken the law and are running to avoid recapture. I find myself praying for these officers throughout the show their job is so dangerous! In a nutshell the show is awesome!

Jeffery MingoReviewed in the United States on February 27, 2012
2.0 out of 5 stars
chasing an evil dude
Verified purchase
This episode isn't highly interesting. However, it involves capturing a man who violated a girl when she was six years old. That's where the title comes from: it's his crimes, not the chase that turned this into an episode.

There was one surprsing twist in this episode. The police run to an apartment where the man inside stalls before he lets them enter. It did make me think it was the criminal who knew he was caught. However, it turned out the woman for whom they were looking was the wrong one, but had the same name and date of birth.

One marshal went by "Rosey" because his first name was Roosevelt. However, it seemed gender-atypical to me and made me think of the song "A Guy Named Sue." I guess when you are a tough, macho cop, you can have a flash of femme to you.

The captured man tries to excuse his fleeing by saying he lost his bed in a homeless shelther. He looked much younger than his actual 50 years of age. But hey, when we bruthas sport the baldie that can happen. Luckily, his former victim's mother was told that he was re-arrested.

ronmacReviewed in the United States on January 10, 2017
4.0 out of 5 stars
Great series!
Verified purchase
This is a very interesting series. The U.S. Marshal Service is an enviable group of people. They are dedicated and they have such diverse backgrounds. They certainly do love their Jobs!

Jeffery MingoReviewed in the United States on February 28, 2012
2.0 out of 5 stars
A Southern Criminal Hides Out in the N-Y-C
Verified purchase
If you saw the episode "Unthinkable," you may feel like this episode is a repeat. In both, the team tries to catch a sex offender who didn't re-register as they were required. This was different in that they never interview the offender's victim's parent.

This episode has a lot of waiting in it. Even one officer admits, "You can be bored for four hours just to arrive to that one minute when you spot the perpetrator." While any rational person would want this offender caught, watching all the waiting here can be dull.

I am used to us Americans being desperate for attention. That's why there are sooo many reality TV shows and tell-all books out there. However, this episode has myriad times in which the person on camera says, "Hide that camera so that they offender or his allies don't see it!" Maybe the show needs to have more hidden cameras and fewer obvious cameramen doing the jobs. For once, somebody on TV wants to be more sneaky and incognito.
See all reviews
Back to top
Get to Know Us
Make Money with Us
Amazon Payment Products
Let Us Help You
EnglishChoose a language for shopping. United StatesChoose a country/region for shopping.
© 1996-2021, Amazon.com, Inc. or its affiliates