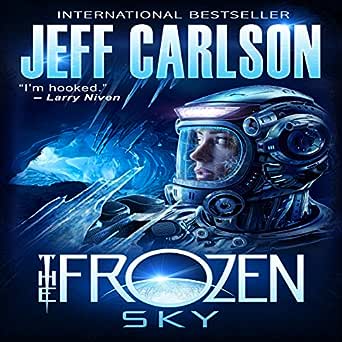 The Frozen Sky: The Novel

VG
3.0 out of 5 stars Good novel, but very weak ending
September 11, 2014
Format: Kindle EditionVerified Purchase
Strange novel. Great premise, decent characters, tons of science, great imagination, but ultimately it didn't really add up, and the ending was an unexpected fizzle. To make a long story short: Life on earth has advanced significantly. We're now profitably mining Jupiter's moon Europa. We have space suits that are out-of-this-world (!) advanced. They walk for you, run for you, feed you and carry out extensive medical repairs on you when you're injured. They fight for you while they repair you. They continue to work, walk, run, repair even when you're exhausted/half-dead. They're highly intelligent. They analyse, they compute, they code, hack, learn, advise. They interface with personal mem files, with AI, with anything.

Which is to say, we've come a long way, baby. And so what happens when life is discovered on Europa? Well, it appears we ain't so advanced after all. We send in an advanced team of three highly intelligent scientists, picked from millions of candidates, who land, immediately circumvent orders, get into trouble and then the whole first contact thing kind of goes kablooey.

It was a bit hard to swallow, frankly. The advanced team is followed by a few other teams with more administrators, techies, etc., from several space agencies, most notably from Europe and Brazil, and they spend time spying on each other, hacking each other's systems, creating and breaking alliances, disobeying orders, goofing with the suits back on earth, profiting from the nine-minute communications delay with home, etc. It's actually good reading, but it just isn't very believable. The greatest event in history - the finding of life on another planet/moon - and all we do is screw up in a very amateurish way. I can understand we have to screw up some - it's a novel, after all, and it needs drama - but the screwing up is so ridiculously goofy. Management and administration of this first contact is beyond abysmal, and I can't believe it's carried out by the same wizards who created those unbelievable space suits. To create a space suit of that nature would not require just good tech, but also amazing process, development, management and QA skills. Those skills are utterly missing in the actions of the groups on Europa, and in the actions of their bosses on earth. Amateurs like this could never have mounted mining operations to Europa, or invented a space suit that would repair your ruined eyeball while it fed you, fought off an attack and began analysing and translating the attacker's sonic and physical language.

Nonetheless, the great science and mecha and all the wizardry and the drama kept the thing going until *poof* -- it simply ended. I read it on Kindle, and at the 94% mark, the heroes scored a major victory and were celebrating. I figured a major twist was coming, something that would cut their celebration short. I went to the next page and saw the words `The End'! My jaw dropped. It simply ended. The antagonists are not heard from again. I realize there's a sequel, and maybe it'll be a series, but this sort of thing is just way below Carlson. He's a real author, not some indie, and he has to end his novel properly. The final six percent of the book is acknowledgements, thanks, and a short story.

Weird. And I don't understand why someone like Carlson is charging a couple bucks for his work, as though it's an indie effort. Publishing is becoming weird.

Anyway, three stars for the science and the premise and pretty good action, but I'm not going to read the sequel. And I'd recommend you read his Plague Year series instead. Far superior.

Stephen Bridge
4.0 out of 5 stars Exciting hard-science SF
January 6, 2017
Format: Kindle EditionVerified Purchase
Exciting hard-science SF for readers who like writers like Hal Clement and Larry Niven. Humans have landed on Europa, one of the moons of Jupiter and the one Solar System body most often predicted by scientists to contain the possibility of life forms. It has a crust covered in ice with what seems to be an ocean underneath. It is also geologically unstable with volcanoes, tremors, and geysers. The ever-shifting alliances of countries on Earth have created a joint crew from China, America, and Europe; but Brazil and some other countries have their own nationalist designs in space and the aggressiveness of exploration latecomers.

Alexis Vonderach, “Vonnie,” is an engineer with the European Space Agency and one of the first three humans to set foot on the moon. They were hastily sent out because some of the mechanized probes (“mecha”) found evidence of a previous non-human civilization. The other two explorers are killed very quickly by a massive land shift and Vonnie barely survives. While attempting to return to her lander, she discovers life forms she calls “sunfish”. She is attacked by them and nearly killed. The rest of the plot is somewhat predictable in that there are major political battles to determine if these creatures should be classified as “sapient” or “animals”. There are many first contact novels with that as the theme; but this one is especially creative in the science of what kinds of beings might live on Europa and what kind of culture they could develop in such a rapidly shifting and dangerous environment.

Characterization is better than many hard-science SF novels but not especially deep. There is plenty of dramatic tension as the humans try to figure out if there is some way to communicate with the sunfish so that neither humans nor sunfish die. As the other space crews who have been waiting in orbit land to rescue Vonnie and to begin exploring the moon themselves, some are determined to kill sunfish for their genetic information and to harvest minerals, while others are determined to push for peaceful interactions.

rsholmes
2.0 out of 5 stars Ruined by expository clunkers
December 25, 2017
Format: Kindle EditionVerified Purchase
I wanted to like this book. It quotes Larry Niven on the cover, "I'm hooked". I'm not as big a Niven fan as I once was but still, I felt ready for some good hard science fiction.

It's hard SF, all right, but good? Actually I guess it mostly is. A tale of first contact on Europa, initial contact that goes very wrong and subsequent events where our protagonist wants to make things right. But then you run up against passages like this:

"Looking at her three friends, Vonnie saw the same spark in Ash's face. They were young, in close quarters, and subjected to unending stress and excitement. Pheromones were merely part of the spell. The ape in them yearned for physical contact, grooming, and reassurance.

"Gene smithing also made their society more free in its sexual norms. Western Europe had already been more sophisticated than most of Earth's cultures, placing few taboos on nudity or female equality. By the twenty-second century, the defeat of venereal diseases and infallible birth control had led to an era called the Age of Love. Sharing partners, threesomes, and group sex were common experiences for young men and women in the European Union."