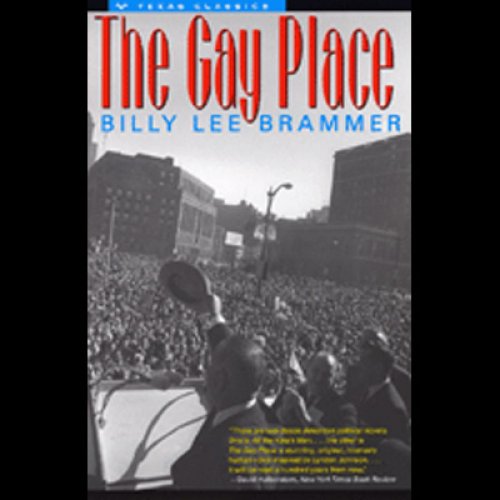 Your audiobook is waiting!
Learn more about membership
List Price: $41.97
You Save: $5.25 (13%)
By completing your purchase, you agree to Audible’s Conditions Of Use
Sold and delivered by Audible, an Amazon company
Share

olingerstories
4.0 out of 5 stars Brammer's Masterpiece
Reviewed in the United States 🇺🇸 on June 1, 2010
Verified Purchase
Billy Lee Brammer's THE GAY PLACE deserves its acclaim as one of the great political novels. Brammer beautifully--and that really is the right word to describe Brammer's ear for dialogue--recreates the political world of 1950s Texas of which LBJ was the undisputed king. Governor Arthur Genstemaker is pure LBJ, so much so that one gets the sense that this novel was must reading for Robert Caro when Caro set out to write the definitive biography of the one time president. What is also obvious with the book is how much politics is not a happy place, that the lives of the participants are empty, that relationships are ruined, and that alocohalism and unfaithfulness are givens.
It is anything but a gay place.

Why not then a five star review given the praise above? The three pieced together extended stories--"The Flea Circus," "Room Enough to Caper," and "Country Pleasures"--really should have been novels each on their own. In extending each, Brammer would have been able to work through some of his pacing issues and also the conclusion to "Room Enough to Caper."
Read more
11 people found this helpful
Helpful
Report abuse

Rosemary F. Petzold
4.0 out of 5 stars Words, As Well as People and Places, Evolve Over Time
Reviewed in the United States 🇺🇸 on December 23, 2012
Verified Purchase
One of the most famous watering holes in Austin, Texas, where legislators, lobbiests, government officials, businessmen, and university students hung out, was a gay, happening place that attracted all comers. Into this beer-infused environment, came much of the "bidness" of government and other fascinating transactions. Billy Lee Brammer, author of The Gay Place, definitely knew where the bodies were buried, and for reasons all his own, he decided to reveal a lot of it here. Austinites, who sat up night after night, matching information from the novel with assorted colorful, non-fictional characters, were intrigued with backstories that gave legs to whispered rumors. Over time, many changes have occurred, not only with the characters and places themselves, but also with the words used to describe them. A sneak peek into the colorful citizens of a smallish Texas town on the cusp of exploding into a sophisticated city, this three-books-in-one novel is a fun read for those who have moved in later and heard the stories.
Read more
2 people found this helpful
Helpful
Report abuse

C. M. Godfrey
3.0 out of 5 stars Texas History?
Reviewed in the United States 🇺🇸 on September 26, 2018
Verified Purchase
Among devotees of Texas literature, this book is iconic. It is the only book that the author, Billy Brammer, ever completed before turning to drug abuse and an early death. The book is actually three short novels built around a Texas governor patterned after Lyndon Johnson and includes references to other political personalities of the 1950s. Each of the short novels is essentially an exercise in personality development around events that take place over a brief periods of time. They include the passage of a bill in the Texas legislature, election of an appointed senator, and the making of a movie similar to Giant, all of which are manipulated by the governor and all of which involve widely unrealistic consumption of alcohol. While I'm old enough to remember the 1950s, this book might have been better if read closer to the time of the events described. In my opinion, if it was ever a good as others remember, it has not stood the test of time.
Read more
7 people found this helpful
Helpful
Report abuse

Faithful Amazon shopper
3.0 out of 5 stars WASTE OF TIME
Reviewed in the United States 🇺🇸 on March 23, 2013
Verified Purchase
This book is made up of two novels. I slogged through the first one. Billy Lee Brammer should have written his own life story -
it would have been much more interesting. Actually, this is probably a part of his personal experience in this slice of life story.
I never found any part that made me feel engaged, much less sympathy, for any of the aimlessly wandering characters.
Maybe the second novel would have been better, but I was eager to move on to a different book.
Read more
One person found this helpful
Helpful
Report abuse