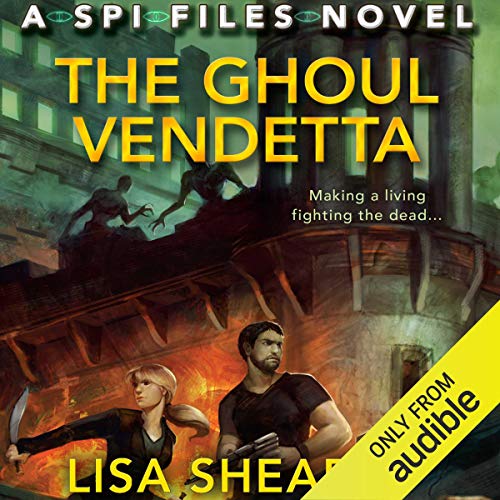 4.3 out of 5 stars
4.3 out of 5
132 global ratings
How are ratings calculated?
To calculate the overall star rating and percentage breakdown by star, we don’t use a simple average. Instead, our system considers things like how recent a review is and if the reviewer bought the item on Amazon. It also analyzes reviews to verify trustworthiness.
Top reviews

Griff
1.0 out of 5 stars Same Old
Reviewed in the United States on May 24, 2021
Verified Purchase
I was hoping for something a little different with this series. After all, the main character, Mac, is clued into the supernatural world. Unlike lots of UF out there, she doesn't get all wide-eyed over a new monster. She doesn't seem to be picking up super powers at an amazing rate and she knows she's not exactly Rambo. Unfortunately this isn't enough to set the series apart.

Of the 4 books in the series that I've read, this is my least favorite. For one thing: Ian. I don't like him, I don't think he adds anything to the story and it gets really old with the over-protection thing for Mac. Plus he's still angsting over his former NYPD partner getting killed years ago. Which is part of the storyline for this book, too.

I'd say "spoilers" but when it's totally obvious what is going to happen, it's not really a spoiler, is it? But just in case, I did say it. Ian is told he's the target of a super-duper bad guy. He is not to go anywhere alone. So what does he do? Stay at HQ like he should? No, for whatever reason, after telling him to stay at HQ, his manager sends him to a crime scene where he - of course - runs ahead of his protection and - of course - gets snatched. Gee, what a surprise!

The rest of the book is Mac and company bravely refusing to think Ian is dead and plotting to get him back. And oh surprise surprise, it's discovered that the Big Bad has to sacrifice Ian in order to break a curse. On an island. At midnight. Wow, cliché much?? And, true to form the good guys spend a few chapters getting their fighters together, plotting how they'll beat the bad guys etc. And once again, why bother? Like every other one of this kind of story, none of those plans hold together. It turns into a free-for-all as usual. Why waste a hundred pages just to wing it in the end??

Other than Rake, this book was nothing more than a story patched together from a bunch of other similar stories. Even the bad guys - Fomorians, can you believe it? - are a walking cliché. Haven't a dozen other books used them lately? Could we see something just a tiny bit original for once?

I am pretty fed up on this kind of plot so it might be my last UF for awhile. Reading the same story over and over gets tedious. Maybe I'll try non-fiction for now,
Read more
Helpful
Report abuse

BookWyrm
3.0 out of 5 stars Another flopped ending
Reviewed in the United States on November 3, 2018
Verified Purchase
The Ghoul Vendetta seems to take place a year or two after the previous book. I kept catching time references that seemed to place it differing amounts of time later. Despite the time, it doesn't seem like much has changed. Despite dating for a year or two at this point, apparently Rake and Mac hadn't even kissed yet.

The opening is exciting. Ian's arch-nemesis is back and operating openly. We learn some very interesting things and see the skills of more SPI staff.

While I enjoyed the beginning, as the book continued it lost the magic. By the time we're ramping up for the final scene I was, quite frankly, not interested in how the book ends. I think there was a surface attempt at character growth, but it was abandoned in favor of straight up action. There was also an awful lot of repetition on both what happened in the previous books, how Mac feels about people and just about everything really. That certainly stopped being helpful and became annoying quickly. I started skimming over the repetitions which pulled me out of the book as well.

Overall the endings of the last two books didn't work for me. As much as I'd like to see more Rake, I'm done with this series.
Read more
3 people found this helpful
Helpful
Report abuse

BareThoughts
2.0 out of 5 stars Fun, fast-past, wonderful read
Reviewed in the United States on January 31, 2017
Verified Purchase
Yet another great story fro Ms Shearin! Of course, I have yet to read anything from her that I did not love. For those who have not read previous books in this series (and why not?! Start reading - they are great!) the heroine Mac is the narrator and has a great voice. Quirky, kind, sarcastic and just fun. One thing I really like about her is she really knows her own strengths and limitations. She knows she is the one usually needing guarding... and accepts that. She really has come a long ways on that - she accepts that no matter how much training she gets, she'll never be an awesome fighter. That doesn't stop her from doing anything she can to help those she cares about, even if it means putting herself in danger. She is surrounded by a great support cast, SPI really is like a family.

This book takes place a few months after The Brimstone Deception and the story itself takes place over just a few days (very common with Ms Shearin's stories). It starts with an attack and kidnapping at a yacht party Mac and Rake are attending (yep - Mac and Rake are now dating), then throw in some bank robberies with partially eaten guards and Mac, Ian and the rest of the SPI team are on the hunt.

Rake plays a larger role in this one and there have been some advancements in their relationship. We learn more about Rake... and more about Ian also. Unfortunately, while there has been development with Mac and Rake's relationship, so much of that happens "off the page" during the months between the last book and this one (although Ms Shearin said there will be a novella sometime based on one of their dates that was alluded to in this book). While I love the fast paced nature of her books, the downside is that we don't always get to see much of the actual building of relationships). However, Ms Shearin is one of the best at conveying the the "feel" of that relationship growing even if much of it actually happens between books.

One does not need to read the previous books to prior to this, Ms Shearin does a great job catching new readers up to speed without over-whelming continuing readers with old information. However, I think one will get the most out of the book by reading previous books. Oh, and for the Raine Benares books, there are slight mentions of the events of Treasure and Treason.
Read more
One person found this helpful
Helpful
Report abuse

Kindle Customer
5.0 out of 5 stars This may be my favorite SPI novel yet!
Reviewed in the United States on August 21, 2017
Verified Purchase
I really enjoyed this novel, and was pleasantly surprised because I didn't realize it was in the series, I have been reading another series by the same author and somehow it escaped me, what a treat!

It may be that I have a soft spot for Celtic lore, and have read many books and historical novels based on my husband's family's country of origin, but this was really fun. I'm also happy to see Mac start with a real romantic relationship, and I think I am partial to goblins! This was a great read, and I can't wait for the next one in the series, which I think will be sometime the end of this year.
Read more
Helpful
Report abuse
See all reviews

Kindle Customer
1.0 out of 5 stars Tedious, uninvolving and misconceived
Reviewed in the United Kingdom on February 12, 2017
Verified Purchase
I've followed the series this far, but this entry is just terrible. The plotting is rubbish, the characters are reduced to cardboard. It's just not credible on so many levels. I didn't manage to finish the book, even, it was so uninvolving. There's far too much use of plot coupons and tired plot-destroying devices like portals. It becomes hard to care. Sorry but this entry in the series is a dud.
Read more
Report abuse

Kindle Customer
3.0 out of 5 stars Decent stories but what's with the copy and paste!
Reviewed in the United Kingdom on March 11, 2017
Verified Purchase
Dithered between a 3 and a 4, enjoying the series but enough with the copy and pasting please! Literally, certain character descriptions are copied word for word from one book to another and they can be over a page long! Good stories but this aspect is so off putting i'm not sure I'll be in for the next round.
Read more
Report abuse

Amazon Customer
5.0 out of 5 stars Another great instalment
Reviewed in the United Kingdom on June 9, 2017
Verified Purchase
Lisa Shearin has done it again. Another great instalment with good character progression. A great story arc and both a complete story while laying the basis for the next one. Loved the crossover with the Raine series.
Long may you keep writing so that l can keep reading :)
Read more
Report abuse

Kindle Customer
5.0 out of 5 stars Very good read
Reviewed in the United Kingdom on February 5, 2017
Verified Purchase
I love this series and can't wait for the next one.
This one has the usual perils for the team, and is enjoyable with some crossover hinted at to the Raine Benares series.
Good to see Macs lovelife improving as well.
A very good book.
Read more
Report abuse
See all reviews
Back to top
Get to Know Us
Make Money with Us
Amazon Payment Products
Let Us Help You
EnglishChoose a language for shopping. United StatesChoose a country/region for shopping.
© 1996-2021, Amazon.com, Inc. or its affiliates