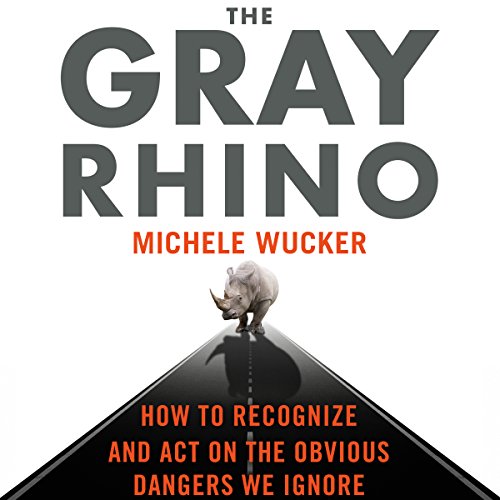 The Gray Rhino: How to Recognize and Act on the Obvious Dangers We Ignore

List Price: $25.51
You Save: $1.56 (6%)
By completing your purchase, you agree to Audible’s Conditions Of Use
Sold and delivered by Audible, an Amazon company
Share

4.4 out of 5 stars
4.4 out of 5
136 global ratings
How are ratings calculated?
To calculate the overall star rating and percentage breakdown by star, we don’t use a simple average. Instead, our system considers things like how recent a review is and if the reviewer bought the item on Amazon. It also analyzes reviews to verify trustworthiness.
Top reviews

Marti Konstant
5.0 out of 5 stars The best case for situational awareness and action in the face of imminent threats
Reviewed in the United States on December 5, 2016
Verified Purchase
This well-researched book made me aware of the world around me on so many dimensions. It is a business book with compelling stories and facts, admonishing readers (with a positive tone) to better see and manage the macro and micro dangers around them.

The Gray Rhino, a unique species of rhino created for this book, is a powerful metaphor for our life’s decisions in the face of obvious threats. The image of a two-ton animal about to charge at me was enough to take note of Michele Wucker’s experiences, stories, and analogies.

The framework, influenced by Elizabth Kubler Ross’s five stages of grief, outlines the stages of response to a threat from a Gray Rhino: denial, muddling, diagnosis/bargaining, panic, and action/trampling. The author does an artful job sharing stories about business, weather, the economy, aging infrastructure, and health scares, among others.

While examples like climate change, the global financial crisis, and recurring cyber security threats demonstrated the downside of denial, I quickly saw broader applications for the model. Career choice and career management, for example, are riddled with denial and muddling (kicking the can down the road). Just like the stories about collapsed bridges and data hacking of companies like Sony, there is the parallel story for individuals who ignore the debilitating effects of staying at the wrong job.

With a starting point of situational awareness, the model is an effective analysis of how to identify a looming problem, while offering concrete suggestions to take action.
Read more
3 people found this helpful
Helpful
Report abuse

peter h. frorer
1.0 out of 5 stars An awful waste of time, a complete gimmick that could have taken 4 paragraphs of insight
Reviewed in the United States on July 2, 2019
Verified Purchase
The author was clearly opportunistically punching together a click bait sort of book. I can not say I learned anything insightful about risk management or self awareness. Total waste of time other than the time spent reading this book could have been wasted doing worse things like watching reruns of Big Bang Theory, etc. Better than smoking cigarettes on the toilet, but not much better.
Read more
4 people found this helpful
Helpful
Report abuse

AmazonCustomer
5.0 out of 5 stars This Book Should Be Required Reading for Anyone Who Leads or Aspires to Lead
Reviewed in the United States on October 12, 2016
Verified Purchase
At its most basic level, The Gray Rhino explores “highly probably, high-impact, yet neglected threats.” Masterfully weaving together real world examples and interviews with behavioral economic theory, Wucker explores how we, again and again, fail to act in situations involving obvious (and probable) dangers.

Taken as a whole, however, this book is really an instructional manual for how leaders at every level can make better decisions—the kind of decisions that produce positive and sustainable outcomes in the long run. Chapters 5-9, in particular, focus on what actions we can take to recognize and accurately evaluate risks, and to effectively address them before they become newspaper headlines (think: data theft, collapsed bridges, and the global financial system…).

The text is also unpretentious and easy to read, and Wucker’s conversational tone and style makes even the most complex ideas easily comprehensible, and interesting to read about. Also, readers who are pressed for time will appreciate the “Chapter Takeaways” at the end of the main chapters (These nuggets alone would provide a solid framework for an MBA-level course at a top university…)

All in all, this is a smart book that’s a quick and interesting read, and that will actually help you to make better decisions. Definitely adding this one to my collection of high quality leadership resources.
Read more
5 people found this helpful
Helpful
Report abuse

Anne Janzer
5.0 out of 5 stars Learn to be a rhino spotter
Reviewed in the United States on May 7, 2017
Verified Purchase
Wow, is this book ever relevant and timely. Wucker takes us on a tour of metaphorical gray rhinos - highly probable, high-impact threats that we would all much rather ignore. Having read the book, I see them everywhere. Yet the message is ultimately one of optimism. Wucker presents a plan for recognizing and avoiding the many gray rhinos threatening us on a global level, in business, and even our personal lives. Let's get this message out, and learn to be rhino spotters.
Read more
2 people found this helpful
Helpful
Report abuse

Rick Matz
3.0 out of 5 stars Author's political soapbox
Reviewed in the United States on June 30, 2021
Verified Purchase
I would have enjoyed the book more if the author hadn't kept trying to force her political views down my throat.

Some good insights, but repetitive.

I'm glad I read it, but it is unlikely that I'd read it a second time.

I should have waited for it to go on sale.
Read more
One person found this helpful
Helpful
Report abuse

Karen F. Cornwell
5.0 out of 5 stars Wow! A Wonderful Narrative that is full of global stories and real-world examples.
Reviewed in the United States on December 22, 2019
Verified Purchase
The Gray Rhino is an incredibly eye-opening book. "Recognizing the quirks of human nature that shape our decisions has the power to change our actions." Michele delves deep into the human psyche to help us understand why we ignore the Gray Rhino and offers great advice on how we can recognize and change our collective path. She even offers a taxonomy of Rhinos including strategies to tackle each of them.

I was surprised to find my topic, the gender gap, to be categorized as a Meta-Rhino but grateful that it wasn't in the Conundrum and Gordian Knot category. The book includes a multitude of global stories and real-world examples which Michele uses to explain our Gray Rhino thinking and offer advice for those who wish to no longer be trampled.
Read more
Helpful
Report abuse

Dave Fleming
5.0 out of 5 stars Don't let this book become the next Gray Rhino. Read and Do.
Reviewed in the United States on November 3, 2016
Verified Purchase
Wucker has done her homework! The Gray Rhino is full of examples, case studies and stories of "dangers ignored." But beyond that, it includes smart and tangible advice on how to stop ignoring and start facing the dangers we avoid. I particularly liked the ideas on "muddling." That section reminded me that not only are rhinos gray, but so is life. Facing danger and possible trouble won't make everything perfect. Nothing does. But reducing denial and avoidance leads to fewer disasters, better collective outcomes, and a better life. Who doesn't want that? Read, reflect on and practice this book.
Read more
Helpful
Report abuse

David Sherwood
3.0 out of 5 stars Better than Black Swan
Reviewed in the United States on June 11, 2020
Verified Purchase
Better than Black Swan, but redundant at times. I found myself skipping pages out of boredom occasionally.
Read more
One person found this helpful
Helpful
Report abuse
See all reviews

Noretz
3.0 out of 5 stars Is this book worth spending 8 to 11 hours of your time?
Reviewed in Germany on June 1, 2016
Verified Purchase
We all have to ask ourselves if it's worth our time (and money) to read a book. So even though there were good points in the book, I can't fully recommend it. As someone who has read several books about behavioural economics (and taking notes), this book doesn't deliver much that is new. The author sure wants to make the "Gray Rhino" happen. It gets silly at times. That said, if this book was 100 pages shorter, without losing the following content, this would be a strong recommendation!

- Threats, such as pandemics, bridges in need of repair, Global Warming or heart failure because of over-eating, are likely and obvious threats ("Gray Rhinos")
- Avoid group think (variety of people/sexes/personalities are better at generating different ideas, or spotting problems, so yes to variety). Having a range of opinions/observations will help avoid availability bias (taking whatever little information you have and overvalue it, since you have little else to go on)
- Optimism bias (people prefer accepting statistics that make them happy as likely correct, but prefer doubting ones that would cause unhappiness: Imagine having to guess your IQ, then being delivered some test results. If this IQ was better than your guess, you'd gladly accept it, if lower, you'd doubt it!). Human tendency to doubt inconvenient truths makes people susceptible to organizations, that sow doubt: Tobacco industry getting people to doubt if cigarettes really cause cancer in the 1950s, polluting industries sowing doubt about acid rain and global warming, etc.
- Denial as a defense mechanism: As a first phase in response to a threat this allows us to deal with shock without incapacitating us
- If you’re not sure how seriously to take a piece of information, consider the source.
- "When politicians cynically whip up fury over immigrants, or social issues on which reasonable people can disagree, or over geopolitical foes, you should ask: What is it that they don’t want you to see instead?"
- Sometimes bad things happen, because people prefer to procrastinate, even as they perceive a threat. Warning others of something, that would require people to take action/effort/cost and then this prediction not coming to pass, would be uncomfortable for us. Being wrong in the crows is easier.
- framing problems in manageable, relevant sizes can help to give people the confidence to believe that taking action to take on even big problems is worth it.
- reward employees for addressing problems early on and to penalize them if they get out of hand. Increase rewards for preventing problems in order to remove some of the obstacles to acting in time in the face of likely disaster.
- Women respond to stress by becoming more conservative, men tend to take more risks
Read more
5 people found this helpful
Report abuse