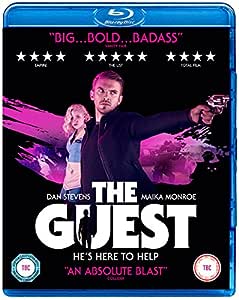 Adam Wingard directs this US thriller in which an ex-soldier causes mayhem within a family. David (Dan Stevens) knocks at the door of the Peterson family and informs mother Laura (Sheila Kelley) that he was a close friend of Caleb (Chris Harding), the son she lost in combat. Welcomed into the family home, David is initially granted a hostile reception by Caleb's brother and sister, Luke (Brendan Meyer) and Anna (Maika Monroe). However, David's handy ability to buy booze and deal out violent retribution to bullies quickly ingratiates him with the teenagers. That is, until an usual sequence of events raises suspicions that David may not be who he claims. Will any light be shed on the guest's mysterious past?

4.2 out of 5 stars
4.2 out of 5
1,465 global ratings
How are ratings calculated?
To calculate the overall star rating and percentage breakdown by star, we don’t use a simple average. Instead, our system considers things like how recent a review is and if the reviewer bought the item on Amazon. It also analyzes reviews to verify trustworthiness.
Top reviews

Anna
5.0 out of 5 stars I Could Keep Watching This Multiple Times
Reviewed in the United States on July 7, 2017
Verified Purchase
I was recommended this movie, and at first I wasn't sure. Now that I've watched it, I'm so happy I did. It was amazing. The whole thing was just super entertaining. It wasn't what I expected because it looks one way and sort of becomes something else. I really appreciated a lot of the great lines. There was a lot of subtlety in the character development and emotions. It's a movie that I think shows more than it tells so you need to pay attention and be open to what it's doing. Some things might seem ridiculous if taken too seriously, but really they are amazing moments if you're not. The acting is top notch and the story is really interesting. The ending was amazing.
Read more
16 people found this helpful
Helpful
Comment Report abuse

astrahl
5.0 out of 5 stars Came here for Dan Stevens
Reviewed in the United States on May 8, 2020
Verified Purchase
I was ready for and expecting a thriller and got a something unexpected.

IMO, Dan Stevens likes to toy with quirkiness and I'm here for it. This started out serious and fell into a familiar but fun stab at camp (no pun intended). You get the feeling that it takes itself seriously but ... doesn't? What you think is going to happen, totally happens and I was still so happy how it happened. I KNEW what was coming next but sat here wide-eyed waiting for it all to happen.

The cast all did a great job but I totally loved Stevens in this. He's being overlooked and underrated for some reason. We know he is a great actor, we know he's got The Look ™, and he's got a great and growing resume. At this point, if he's in it, I'll buy a ticket.

Madsjchic
5.0 out of 5 stars Would totally watch this again
Reviewed in the United States on March 27, 2017
Verified Purchase
This movie hit all the right notes. I actually think the ending made this movie. It could've definitely been forgettable, but the tone of the movie changes as you go through, and it never really slows down enough for you to roll your eyes. I felt like I was watching one of those good 80s movies in the slasher horror genre before it became a trope.
.
.
.
Also, um, dang, same Anna. I would need a minute after seeing him come out of the shower, too.
Read more
10 people found this helpful
Helpful
Comment Report abuse

Kenneth Harrigan
4.0 out of 5 stars Good Action Entertainment
Reviewed in the United States on April 25, 2015
Verified Purchase
Bias Alert I am hooked on action films. Surprise, Surprise this was even better than I hoped. This was similar to the Universal Soldier films from years ago except much better in so many ways. Although I like sci-fi films this is Universal Soldier without the science component of the story. What makes this film so attractive is that it will appeal to different members of the family. For teenagers it addresses school bullying and young love. For the parents it touches on the cooperate struggle and issues that a housewife and mother deals with when the family has issues. I don't give spoiler alerts but I will say that none of that is the primary purpose this film was made. Now to address those who like myself love action. This has hand to hand combat, rifles, hand guns, knife fights and explosions. There are different vehicles used in the action sequences also. I would recommend adult supervision whenever children watch this film, not because of nudity or vulgar language but to explain that the Guest has improper problem solving solutions. In other words, make sure the children know that society has laws against solving their issues like the Guest, but it makes a very entertaining movie. Sit back and enjoy and you will watch it more than once if just to make sure that you saw what you saw.
Read more
4 people found this helpful
Helpful
Comment Report abuse

Raymond Terry
5.0 out of 5 stars Unexpectedly Awesome / Don't judge a book by its cover
Reviewed in the United States on June 18, 2018
Verified Purchase
As a recent fan of Dan Stevens, this was recommended to me the weekend before this review goes up. I saw that Amazon had the Blu-ray for reasonable price so I ordered it. The cover makes the movie looks like any other drifter with gun movie. After watching it, The Guest is far more than a "person ingratiate's themselves to their surroundings for nefarious reasons" kind of movie. It has humor, shockingly good action scenes, and horror elements that work surprisingly well. This is a well crafted drama that should be seen by more people.
Read more
3 people found this helpful
Helpful
Comment Report abuse

kittenwranglerTop Contributor: Makeup
5.0 out of 5 stars Awesome Movie!
Reviewed in the United States on August 24, 2018
Verified Purchase
Ok, this is the only movie of the last decade that I thought worthy of owning! Anyone old enough to remember most of the soundtrack when it was first released should appreciate this movie. (Yes, I'm 45, & still love Love and Rockets' "Haunted When The Minutes Drag"!) Sure, the characters feel like they need to be more fleshed out, but that's common in a lot of movies & the low budget-ness makes up for it with unabashed & glorious violence! Dan Stevens is captivating, you really want to know what he's hiding & why he's really there. This premise moves the movie along so you never get bored with all the aforementioned low budget-ness! It definitely makes you question the ethics & boundaries of training elite killers. The Dan Stevens character seriously reminds me of close friend who went into the Army special forces, he was a perfect gentleman, who was perfectly lethal and never seemed unhinged.
Read more
One person found this helpful
Helpful
Comment Report abuse

P. Farvour
5.0 out of 5 stars Awesome Movie, Kickass Score.
Reviewed in the United States on December 6, 2017
Verified Purchase
Great retro kind of movie. Has a definite 80's Carpenter feel. The action escalates quite rapidly in The Guest and doesn't let up. And of course the score (NOT THE SOUNDTRACK) is epic. Steve Moore has made some amazing scores since he did The Guest. This is one of his best. Anyone who's familiar with Zombi or Moore's solo albums knows what I'm taking about. Vintage synthesizer power at its finest. If you don't like the movie, you should still pick up Moore's score for this one.
Read more
3 people found this helpful
Helpful
Comment Report abuse
See all reviews

MTH
5.0 out of 5 stars Dan Stevens thrills and chills in this cult classic in the making.
Reviewed in the United Kingdom on October 22, 2017
Verified Purchase
A terrific thriller with a stellar cast and the right amount of macabre twists.
Dan Stevens gives a standout performance as the magnetic, seductive, yet utterly unnerving David: the mysterious house guest who claims to be the friend of a family's deceased eldest son, David seems determined to fix all the problems this troubled family has but Is David too good to be true? Does David have something to hide?
Maika Monroe also shines as the strong female co-lead, Anna: the older sister suspicious of David and his motives for helping her family.
Better than it's premise, this film is a triumph of style AND substance without either bogging down the movie.
Smart, suspenseful, filled with bloody action and strong performances - The Guest is highly enjoyable and well worth your time.
Read more
7 people found this helpful
Report abuse

robert harris
5.0 out of 5 stars Dan Stevens ( the next james bond ) on top form.
Reviewed in the United Kingdom on February 12, 2018
Verified Purchase
loved this movie. I thought dan stevens was excellent as the psycho lead and maika Monroe superb as the teen sister. I cannot understand all the negative reviews on here, and it leaves it open for a possible sequel. dan stevens looks completely different than his downton abbey days, like a different person. he was also excellent in another film, a walk among the tombstones, with liam neeson, so check that out as well if you haven`t already seen it.
Read more
2 people found this helpful
Report abuse

Elwyn Roberts
5.0 out of 5 stars Hugely entertaining homage to '80s horror movies
Reviewed in the United Kingdom on May 29, 2016
Verified Purchase
Dan Stevens as "David" is an acting revelation. He's an intense, unkillable horror movie antihero who's escaped from the '80s and David brings back all that decade's synthpop, mists of dry ice, and neon to very cool effect. All the actors involved are great, Adam Wingard's direction is very assured. The soundtrack is a loving reference to the 1980s. On the diac you get an informative commentary track, deleted scenes and a trailer.
Read more
One person found this helpful
Report abuse

Wazza Jude
5.0 out of 5 stars comes in a slim case, cover art worthy of ...
Reviewed in the United Kingdom on December 23, 2017
Verified Purchase
comes in a slim case,cover art worthy of slip alas none:dvd specifically region 1 locked,symbol appears printed on disc art.bd region unspecified but is region free on testing.a 5.1 dts hd master audio track 'only' for this presentation:2.40:1 ..1hr.41mins.
look out for an update.
Read more
Report abuse

Mrs. K. Mcneil
5.0 out of 5 stars A little gem of a film.
Reviewed in the United Kingdom on November 21, 2019
Verified Purchase
I bough this purely because Dan Stevens from Dowton Abbey game. What an absolute gem of a movie and Dan is brilliant as a stone cold killer. Would definitely recommend this.
Read more
Report abuse
See all reviews