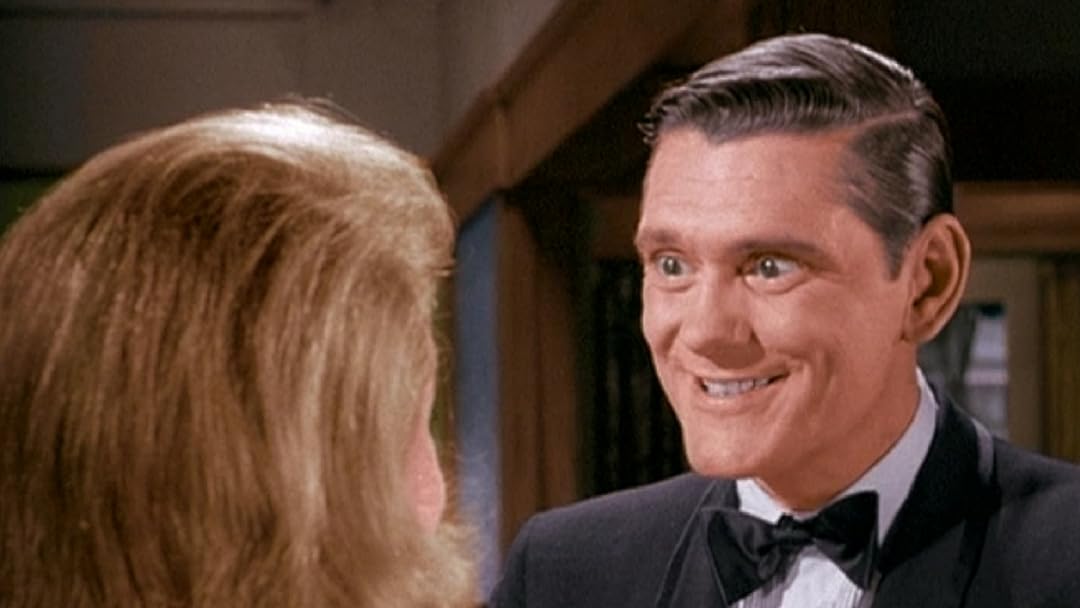 (687)
7.61966ALL
In the hilarious second season of Bewitched, the Steven's are back, along with their new baby girl Tabitha. Endora still terrorizes Darrin and some new family members decide to drop in.

leslie eckhardtReviewed in the United States on January 22, 2015
5.0 out of 5 stars
THE EARLY SEASONS ARE THE BEST
Verified purchase
Bewitched was a wonderful series that is best in it's early seasons. The writing is superior in seasons one and two, and still good in three and four. Season five unfortunately suffers from Dick York's absence in many of the episodes. I really dont care much for seasons six thru eight, though that's no fault of Dick Sargent's portrayal of Darrin. The writing was more gag driven rather than character driven, and the recycling of many early plot lines was just plain lazy. The ones to savor are seasons one and two, which for years were not seen due to the fact that they were in black-and-white. They were colorized around 2000, and the quality of the color is surprisingly good. Sony wisely issued these two seasons in both black-and-white and color, but now Mill Creek has re-issued these two seasons in black-and-white only. Whichever version you prefer, the two seasons are BEWITCHED at it's best, with the hilarious Alice Pearce giving the definitive perfomance as Gladys Kravitz. Paul Lynde appears as Samantha's driving instructor in season one, while making his debut as Uncle Arthur in season two. One thing to note is that two episodes in season two are repeats from season one, with a brief new opening scene added. I really consider season two to contain 36 rather than 38 episodes for this reason. But all told, black-and-white or colorized, the two initial seasons of BEWITCHED are entertaining good fun, splendidly written and acted.
27 people found this helpful

Eduardo CorrochioReviewed in the United States on April 28, 2008
3.0 out of 5 stars
Coloring of B&W Films Never Looks Good or Natural
Verified purchase
There was temptation to rate this season based only on the colorization, which I would have given one star. But it's "Bewitched", so I am giving the review three stars.

I should have gone with my gut instinct as soon as I learned that the studios were colorizing the black and white seasons of certain shows (I Dream of Jeannie, Bewitched). I should not have purchased the fake color seasons. Well, you live and you learn. The reason I am writing this review is because there may be folks who are on the fence, undecided about buying this. Yes, several of the Amazon reviews here are glowing, suggesting the colors are very nicely rendered. I should not have believed them. It seems beauty is definitely in the eye of the beholder. These colors are far too too intense and weird looking. (Now, I do realize that this is just an old sitcom to some people and not Citizen Kane; but I cherish classic TV and feel that I needed to address this coloring issue.)

I bought the colored version of the second season and then was disappointed. Luckily I don't need to buy the original black and white set; when I watch this set I simply turn the color off on my television. Problem solved. I no longer need to be assaulted visually with hues that are far too garish, or shades that don't make sense. Example: neighbor Abner Kravitz's pajamas are the same shade of gray as his pillows and sheets? Please. Endora's hair is an insanely intense, flourescent orange. Ridiculous. Some of the wallpaper, draperies, tablecloths and furniture look horribly unnatural. It's not all terrible but it's fairly close.

What I do not understand is how people writing reviews here can compliment and praise this colorization so strongly when it is not really good. Watching these episodes, one is constantly reminded that these were filmed in black and white; the manmade colors just do not look normal or natural or appropriate. Very seldom does a color look right. Unfortunately most major colors used are far too loud. So the colorization gets a one star grade.

Bewitched itself is great fun, a silly diversion that, while flawed, is very enjoyable. The characters are beloved by many; I am particularly charmed by Endora and Aunt Clara. The comedy is fun and clean. Gladys Kravitz is always a hoot as she continues to think she's going insane. The show succeeds in its slapstick and also in its sentiment.
As the show progressed, in later seasons, it seemed to rely too much on the formula of "how can Darrin and Sam explain the presence of a (animal, mythical beast, or historical figure) in their home, so that it could become part of the advertising campaign". But these earlier episodes don't rely quite so heavily on that plot point.
And these seasons have a generous amount of episodes. You get a nice quantity of 38 on the second season. There are a couple of repeats/flashbacks from the first season thrown in (Samantha Meets the Folks, and a Christmas episode) but that's no big deal. They did the same thing on "I Love Lucy" when she was pregnant.

While seeing this on dvd, I am reminded how much Elizabeth Montgomery and Agnes Moorehead raised the quality of the material. These two actresses really made this show better than it would have been had other actresses been cast.
It's nice to watch these episodes now that they are impossible to find on my basic cable lineup. It seems that good TV from the 50's and 60's isn't so easy to find on television anymore. Luckily dvd is here.

I hope this review helps people who are unsure about which set to purchase.

RaynaReviewed in the United States on November 5, 2022
5.0 out of 5 stars
COMFORTING
Verified purchase
I loved watching Bewitched when I was young. And now the that I'm older, it's comforting seeing it again. And no commercials. I'm getting spoiled.
One person found this helpful

VyrdlokkinReviewed in the United States on August 15, 2013
5.0 out of 5 stars
BEWITCHED is a Very Special Show 4 Me
Verified purchase
This review is in regard to Episode 27 from Season Two, 'the Leprechaun'

A year b4 I went into Kindergarten, my mother and I spent the whole preceding year watching Bewitched reruns and reenacting the scenes all day, everyday. It was one of the most special years of my life. Little did I know that the following year I would be separated and thrust into a world that would never be the same again. Personally, I do not necessarily embrace sending kids to school. My mother later had another child, my sister Kimberly... and she home-schooled her. She is the most balanced, well-adjusted sibling I have.
I like this particular episode because Sammy says 'Bryan' (my first name) so many times its unreal. I am not imagining this, I don't think any other episode has her addressing any other person by their first name this much. I definitely detect it must be her favorite name ever. I think she later named her son by this name, but for that you'd have to read the trivia stuff online at bewitched.net or the trivia Bewitched book (available at Amazon...). Blessed Be, Bryan
3 people found this helpful

Rebecca L. GentzReviewed in the United States on January 7, 2012
4.0 out of 5 stars
Twitched
Verified purchase
I so far have bought 1-4 seasons.And I love all of them.My only problem was with season 2 (5 disc one) the episodes were out of order,and there is episodes of season 1 and Im not sure what season one of the episodes is because Im not sure when they switched Dick's.But the latter Dick is in one of the episodes.So Im wondering if I dont have all of them for season 2 or not on the 5 disc set I bought.But none the less I love this show and so brings back child hood memories of wishing I could twitch my nose!!I dont nit pick over the color even though alot of it is not true to the show,avacado was the color of appliances and they are more lime green (only mentioning this to the ones that didnt like the color) I wished I had a list of the original 2nd season episodes so I knew if I do have them all and they just added a few more out of order episodes.The other thing is one of the episodes started out with subtitles in spanish,but shortly stopped.Im still glad I got it!
3 people found this helpful

Grace MonetReviewed in the United States on September 9, 2011
5.0 out of 5 stars
Bewitched Second Season DVD
Verified purchase
This is one of my favorite shows from my childhood. I think shows were written better when there were guidelines and taboos. Anyway, I was thrilled. I was thrilled that it didn't cost as much as expected, and thrilled when I watched it.

C'mon, I already knew what to expect. Paul Lynde was one of the prime reasons to get this, just to see only his head on a platter of lettuce. Then in the same episode, to see Darrin chant, "Ya-ga-zoozie, ya-ga-zoozie, ya-ga-zoozie zim!" Oh, yes there had to be a cow bell to ring and duck-call after each round of that.

I was looking forward to Dr. Bombay's first appearance, but it was the wrong season. That means Samantha hasn't called out, "Dr. Bombay, Dr. Bombay, emeregency, come right away!"

The DVD copy was well done. I haven't yet tried to use the closed captioning, because my hearing aids are just fine.

This one's a keeper.
3 people found this helpful

Sassy68Reviewed in the United States on September 13, 2022
5.0 out of 5 stars
Beloved classic!
Verified purchase
Bought this for my sister's birthday. She loves the show.
One person found this helpful

FlatbushedReviewed in the United States on May 23, 2016
5.0 out of 5 stars
I Love Samantha!
Verified purchase
First of all, I am a totally biased Bewitched obsessive and Season 2 is my favorite: Tabitha is born, Endora's claws are often out and leaving their mark on the hapless Darrin. Supporting characters like Aunt Clara and Larry and Louise Tate are all given ample opportunity. And Samantha is occasionally flustered but mostly an unflappably problem solver, with her twitch in tact. It's heaven on Morning Glory Circle (though shots of what should be NYC look a lot like LA ;-). Anyone notice that Lucy and Desi move to Westport, CT and Samantha and Darrin live there too. What do both couples have in common? Director/producer William Asher, who was Elizabeth Montgomery's husband at the time and who directed some of the I Love Lucy episodes. Must-see TV!
8 people found this helpful
See all reviews
Back to top
Get to Know Us
Make Money with Us
Amazon Payment Products
Let Us Help You
EnglishChoose a language for shopping. United StatesChoose a country/region for shopping.
© 1996-2022, Amazon.com, Inc. or its affiliates