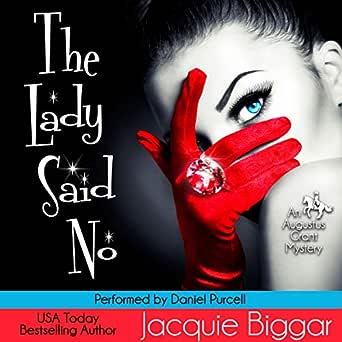 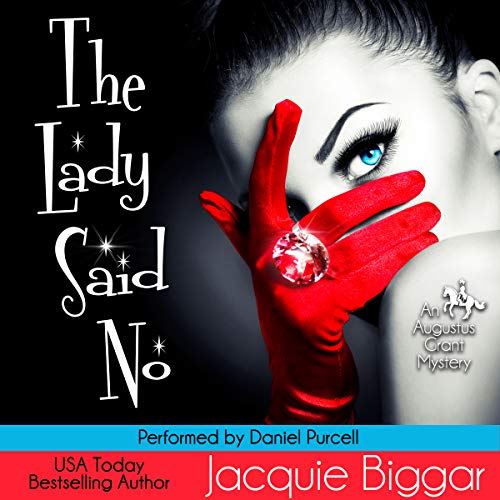 The Lady Said No: An Augustus Grant Mystery, Book 1

4.6 out of 5 stars
4.6 out of 5
37 global ratings
How are ratings calculated?
To calculate the overall star rating and percentage breakdown by star, we don’t use a simple average. Instead, our system considers things like how recent a review is and if the reviewer bought the item on Amazon. It also analyzes reviews to verify trustworthiness.

James J. Cudney IV (Jay)
VINE VOICE
5.0 out of 5 stars Intro to a southern investigator from the past
Reviewed in the United States on October 17, 2018
Verified Purchase
I stumbled across author Jacquie Biggar via her WordPress blog and/or Twitter account and learned she had published a lot of books. I perused the list and chose this one based on my normal reading preferences leaning toward mystery and historical fiction. In this novel, part of a series or collection of books, we focus on foul play leading up to a 1950s Kentucky Derby event. I get to combine two of my favorite genres -- how fun!

August Grant (Gus) is the detective who's called to a plantation home when the owner is found dead. It appears as if the man shot himself, and his wife is beside herself. She's also in the arms of the local sheriff. The two policemen face off over whether it was murder or suicide. Gus soon meets a staff member at the plantation and has an intimate connection to her in the past. He also learns a secret about the end of their relationship that could change the future. As he pokes around, something's also amiss with the upcoming horse race and everyone is more jumpy or angry than ever. Gus keeps pushing until he learns all the information he needs to find the killer and fix a wrong in his own past.

The story is on the shorter side but makes for a great introduction to the author's writing style and perhaps the series if you enjoy the characters. Biggar is descriptive but also very focused on the plot, which is always important to me. I enjoyed the layers of this one as it kept growing more and more complex as the pages flipped by. It's an easy read, less than 2 hours if you're focused, given how she draws you into the plight of a few characters and the actual mystery. Although it takes place in the 1950s, there isn't a lot of detail about the time frame which can be both helpful and not helpful. If you're looking for a deep southern connection from the past, it's on the lighter side, but it also makes for a good foray into the exploration of life at that time. The details that tell you the time frame are hidden in the decor, word choice, and character actions. No computers, no cell phones, no automated way to track a killer. Just good old fashioned common sense and questioning. I like it!

I look forward to reading more from the author's vast publications... perhaps pushing my boundaries on some genres and reading in a new one. Kudos to the author for creating a wonderful book with lots of potential to tempt and tease readers on all she's capable of.

Robert I. Katz
5.0 out of 5 stars A Romantic Mystery
Reviewed in the United States on December 12, 2019
Verified Purchase
Jacquie Biggar primarily writes romance novels, so The Lady Said No, is a bit of a departure for her. It’s a mystery, supposedly the first in the Augustus Grant series, but this book came out in April, 2017 and so far, the series has not been continued.

Despite being a mystery, there is a heavy dose of romance. Augustus is a highly regarded police detective, with a complicated back story that is only alluded to. It seems that sometime in the past, he saved the life of the President’s daughter and was offered a job in the White House. He’s thinking about it, but meanwhile, is working back in his hometown in Kentucky horse country. Augustus has an obnoxious ex-wife and after his divorce, was involved with a woman named Rebecca, who is now working as a domestic in the Jorgenson household, the owner of which has just died from a gunshot wound to the head. Despite the objections of the local sheriff, Augustus is assigned by the Chief of Police to look into the case, and is more than startled to encounter Rebecca, who now has a small daughter, working at the mansion.

Initially thought to be suicide, the death is quickly determined by Augustus to be murder.

The characterizations are well-done and the plot makes sense. It’s a short book and despite a few red herrings, the plot isn’t complicated. There is more romance in this book than in most mysteries, and more mystery than in most romances, but this does not detract from an entertaining read. I enjoyed this book and hope that the author continues the series.
Read more
Helpful
Comment Report abuse

Emily Pennington
TOP 100 REVIEWER
5.0 out of 5 stars Excellent Mystery
Reviewed in the United States on May 7, 2019
Verified Purchase
This wonderful, suspenseful page-turner will keep the reader’s interest as the detective tracks down the murderer, despite the growing number of suspects – especially one near and dear to his heart!

Detective Augustus “Gus” Grant pulled up behind the Sheriff’s car at the mansion. He knew the Sheriff would not be happy to see him, but the Chief had insisted he work on this case. As expected, the Sheriff said Jorgenson’s death was clearly suicide, gunshot to the head, so Gus would not be needed. But he insisted, following Chief’s orders, he still needed to talk to the staff – or he would question the widow? The widow Jorgenson saw his determination so reluctantly gave him permission to question them. Odd that she didn’t seem to be grieving her husband’s death.

Rebecca Hayes stared down at the drama below her. Suicide didn’t make sense to her. His favored colt, Forever Humble, was slated to run in the Kentucky Derby and he was worried about his horse. As she came down the stairs, she saw a familiar face – a man who had stolen her heart in the past. But he wanted to be a detective and she wanted stability, so they moved on. But for both of them, all those feelings rushed back, as neither said a word.

Gus entered the crime scene and knew this was a murder. Nancy Huggins, the coroner, showed him a bloodied statue found under a chair. The blood and hair looked like a match to the victim. Gus looked through the desk for any evidence and found a yellowed paper with a warning on it that chilled him to the bone: “Do what I told you to do, or the truth will destroy you.” Trouble was brewing – and he was afraid that Rebecca was involved somehow. Would he arrest his former love? Or would he believe in her innocence and work with her to find the real murderer?

This was a very well-written story. Gus reminded me of the old TV show “Columbo” where the brilliant detective appeared like a bumbling, friendly idiot but was actually relaxing those around him so he could get at the truth. I enjoyed watching Gus work on this murder. The characters were presented well to the reader. The story line was suspenseful and well-paced. The reader is given the information about various suspicious characters to make it fun to try to solve the case with Gus. And the narrator, Daniel F Purcell, did a great job with the character voices and perfect inflection of his voice to reflect the narrative! You won’t want to miss this one!
Read more
Helpful
Comment Report abuse
See all reviews

J. Read
5.0 out of 5 stars Love Detective Augustus Grant!
Reviewed in Canada on February 25, 2018
Verified Purchase
Augustus Grant is a savvy, hard-working police detective with a complicated past and clumsy feet. Called back to Chandler County to solve a murder, he discovers a secret that will change everything. The only thing I loved more than Augustus was the vividly described setting. A super-rich Kentucky Derby caliber horse farm and the charming but also challenging community of Bourbonville provided the perfect backdrop for this intriguing mystery brimming with romance and suspense.
Read more
Report abuse

Darlene O
5.0 out of 5 stars Great Read!
Reviewed in Canada on February 4, 2018
Verified Purchase
I really enjoyed this murder mystery, which kept me guessing the entire time. I can’t wait to read future books in the Augustus Grant series!
Read more
Report abuse
See all reviews