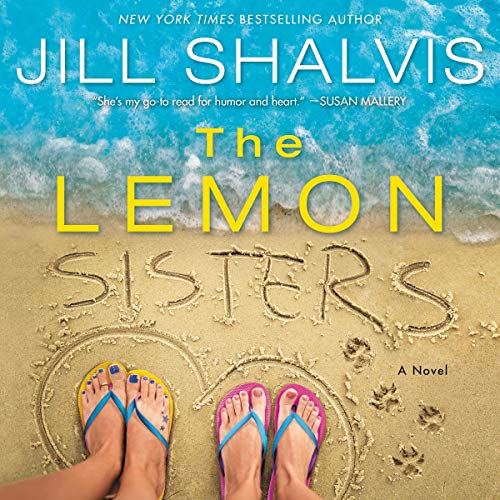 The Lemon Sisters: A Novel

4.6 out of 5 stars
4.6 out of 5
742 global ratings
How are ratings calculated?
To calculate the overall star rating and percentage breakdown by star, we don’t use a simple average. Instead, our system considers things like how recent a review is and if the reviewer bought the item on Amazon. It also analyzes reviews to verify trustworthiness.

Book lover -Philadelphia
3.0 out of 5 stars Realistic sisters who whine and keep secrets
Reviewed in the United States on June 25, 2019
Verified Purchase
I bought this book because I have read others by Jill Shalvis and liked them. Maybe it's been too long since the last one but I found this boring, the plot easily anticipated and the sisters whiny (Mindy) and ridiculously attached to secrets (Brooke). The HEA is visible from a long way off, in fact, from the start. Plot points are simply not credible: Mindy dumps her three crazy (come on - the little boy wearing dresses to school? the toddler who barks when he can speak perfectly well?) kids on her sister who has none and within three days the sister is doing beautifully with the kids, knowing just how to handle them. Brooke's boss and former lover in L.A. is waiting for her to resume her job - what is it, it's never really explained - at which she is wonderful that she can show up anytime. Really? And maybe it's me, but if Garrett is so wonderful, is it really believable that he has waited SEVEN YEARS?

Sorry, maybe i am too cynical for this one. Or maybe I need a different romance writer. This will be my last Shalvis for a long, long time.
Read more
16 people found this helpful
Helpful
Report abuse

Amy
5.0 out of 5 stars The Lemon Sisters
Reviewed in the United States on June 18, 2019
Verified Purchase
When Brooke's older sister, Mindy, shows up on her doorstep with her three children and looking like she's about to breakdown, there's nothing for Brooke to do but step in and offer help. This offer of help leads Brooke back to Wildstone, a place she left seven years ago with barely a glance back. But things in Brooke's life have been not feeling quite right not since an on-the-job accident nearly took Brooke's life. Much like Mindy, Brooke knows something has to change and she figures going back home will start her on the path to healing and moving forward.

When she runs into her former love Garrett, Brooke begins to realize that moving on may be harder than she previously thought. But facing the past will come with revelations in love and in sisterhood.

For me, The Lemon Sisters was a perfect stay-up-all-night second-chance romance. I'm a sucker for the second chance romances and Jill Shalvis certainly delivered. The chemistry and attraction between Brooke and Garrett just leaps off the page and I found myself feeling giddy with every interaction they had. I really liked the way Jill Shalvis slowly builds up the past hurts and issues between them, but with the realization that it doesn't matter as much because the feelings they have for each other are still there. Despite the feelings, however, is the fact that they do have to work through the issues before they can happily move on. Brooke's leaving hurt Garrett on a fundamental level which brings up things in his past that he hasn't yet fully dealt with either.

On a more secondary level, but nonetheless still important, we have Mindy Lemon and the problems she's facing being a working mother of three with a doctor husband who is at the practice more than he's home leaving Mindy with the task of doing everything else. It's daunting and exhausting and an issue that many mothers face: the imbalance of the home life. For Mindy, she's at her breaking point, but other than that, it causes her to take a look at the life she currently has and question whether or not it's still what she wants in the way she wants it. I felt like Mindy and Linc's (her husband) story takes more of the background regardless of Mindy getting her own Points of View within the book, but I wished we got a little more depth to their relationship. I felt like we were almost there, but could have gone a little deeper in terms of how Mindy and Linc come to terms with the changing dynamic of their marriage and what they plan to do about it in order to stay happily married, or on the other hand if not being married would be the solution.

Mainly, I felt like this book was more self-contained than the previous two books. It took place in Wildstone, but there was very little interaction with those outside of the quartet of Brooke, Garrett, Mindy, and Linc. Whereas I felt like the previous two books relied a little more on community interaction. I think it's because each character is from Wildstone originally. They're already familiar with the land and the area, the people to a certain extent, so the focus is placed more internally with the issues that the group have to come to terms with either individually or with each other - as is the case with Brooke and Garrett, and Brooke and Mindy, and Mindy and Linc respectively.

So far, I think this one is my favorite of the Wildstone series. It stands perfectly well on its own so if you start with the Lemon Sisters you should be fine.
Read more
11 people found this helpful
Helpful
Report abuse

Stacey is Sassy
5.0 out of 5 stars I think this is Jill Shalvis’ best book…since her last one 😉
Reviewed in the United States on June 18, 2019
Verified Purchase
I have my best ideas in the shower, and again, I found the answer. The reason why I love Jill Shalvis’s romance stories is that her characters are looking for their happy place. That’s it. The heroine isn’t looking for a billionaire to drape her in diamonds. She’s not looking for a superstar to guide her into the spotlight. A biker…mafia man…hitman isn’t called for to show her a bit of the dark side. Jill Shalvis creates heroine’s that are just looking for someone to share their happy place. Someone to share the good times with the bad. The person who will put them first and expects the same. These women just want to love and be loved, put first and not forgotten about. I get it because it’s realistic and, in some ways, that is what we should all be hoping to attain.

I LOVED meeting and getting to know Brooke and her sister Mindy, Linc, Mindy’s husband, and Garrett, Brooke’s first love. These four people were awesome in their own way but completely flawed. They all have outstanding attributes that made them shine, alongside characteristics that, while negative, also made them themselves. No one is perfect, they realise this and they know expecting perfection is unrealistic. What made them even better characters was their ability to acknowledge their flaws and accept that they needed to work on them.

The Lemon Sisters took me on an emotional journey and left me extremely satisfied. I laughed, cried, squirmed and sighed. While the main four characters were riveting, we were also treated to some very special additional characters. Mindy and Linc’s kids were so cute and I loved seeing their quirkiness accepted and encouraged. Brooke’s friends from her job were amazing and I really would love a story for both Tommy and Cole (I think that was their names).

Seriously, I can not recommend this book highly enough. I guess the reason why I loved it so much was because it put me in my happy place. Last night, I was lucky enough to hit the trifecta…a fantastic book to read, a glass of wine in my hand and hubby making me dinner and singing off-key to make me smile. Who could ask for more???

Thank you, Jill Shalvis, your words made my day.

Stacey is Sassy, received an advanced copy of this story. The copy provided is not the final copy and may be subject to edits and changes.
Read more
4 people found this helpful
Helpful
Report abuse
See all reviews

zoe
5.0 out of 5 stars Sisters in crisis!
Reviewed in the United Kingdom on June 18, 2019
Verified Purchase
A story of two halves. You have Mindy, who believes her marriage is in trouble and Brooke, who has kept secrets from everyone, including her family. These have caused her to close herself off for years. Now all that is set to change. Mindy is on the verge of a breakdown and Brooke is the only one that can help. She returns to her home town to care for her sisters children. By doing so she must also confront the demons haunting her past. This includes Garrett, the only man she’s ever loved and the one whose heart she broke. He is adamant she won’t get another chance at his heart. With Brooke ready to confess her secrets of the past, will it be enough to repair the damage that she caused or are both her and Garrett destined to remain broken forever? When Mindy returns home, not only will she have to try to save her marriage, she will also have to face the real truth of her sister’s life. An emotional, heart stopping story of courage, acceptance and love. You need tissues for this one as it definitely tears at your heartstrings.
Read more
One person found this helpful
Report abuse

patricia
5.0 out of 5 stars Good light hearted romance
Reviewed in the United Kingdom on September 5, 2020
Verified Purchase
Nothing to dislike, if you enjoy Jill Shalvis, you will like this book
Read more
Report abuse

Tasha
5.0 out of 5 stars Couldn’t put it down
Reviewed in the United Kingdom on December 22, 2019
Verified Purchase
Loved the relationships in this book. Showed you never judge a book by its cover. Never envy someone else’s life they may be going through similar struggles.
Read more
Report abuse

babs
5.0 out of 5 stars One of the best
Reviewed in the United Kingdom on June 30, 2019
Verified Purchase
A great read
Read more
Report abuse
See all reviews
Back to top
Get to Know Us
Make Money with Us
Amazon Payment Products
Let Us Help You
EnglishChoose a language for shopping. United StatesChoose a country/region for shopping.
© 1996-2021, Amazon.com, Inc. or its affiliates