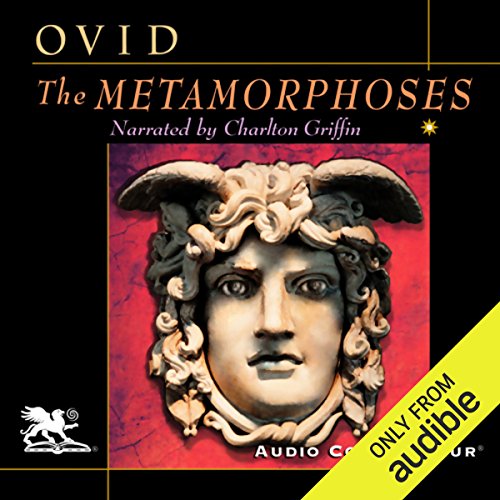 Ovid (Author), Charlton Griffin (Narrator), Audio Connoisseur (Publisher) & 0 more
3.7 out of 5 stars 31 ratings
See all formats and editions
Sorry, there was a problem loading this page. Try again.
An undeniable masterpiece of Western Civilization, The Metamorphoses is a continuous narrative that covers all the Olympian legends, seamlessly moving from one story to another in a splendid panorama of savage beauty, charm, and wit. It marked the first attempt to link all of the Homeric and pre-Homeric myths into a single work and to carry the entire chronology into the Roman pantheon. All of the gods and heroes familiar to us are represented. Such familiar legends as Hercules, Perseus and Medusa, Daedelus and Icarus, Diana and Actaeon, and many others, are breathtakingly recreated.

Ovid was probably the most popular of all the Roman poets during the Renaissance and Baroque periods, and his verse was the inspiration for countless artistic and literary masterpieces of the time. Shakespeare, Bernini, and Rubens were only a few of those who mined his work to extraordinary effect.

Ovid has left mankind a magnificent achievement, and his sparkling poetry is a tour de force of Homeric and Roman myth. As Ovid himself wrote: "As long as Rome is the eternal city, these lines shall echo from the lips of men."

Enjoy a free audiobook + more
Learn more about Membership
List Price: $61.60
You Save: $8.61 (14%)
By completing your purchase, you agree to Audible’s Conditions Of Use
Sold and delivered by Audible, an Amazon company
Share

3.7 out of 5 stars
3.7 out of 5
31 global ratings
How are ratings calculated?
To calculate the overall star rating and percentage breakdown by star, we don’t use a simple average. Instead, our system considers things like how recent a review is and if the reviewer bought the item on Amazon. It also analyzes reviews to verify trustworthiness.
Top reviews

Scott
5.0 out of 5 stars Readable translation of a great work
Reviewed in the United States on March 8, 2016
Verified Purchase
This is a very readable translation. I went back and forth between three translations before settling on this as the one I enjoyed best.

This is one of the more important works in the World lit canon. If you are interested in myth, it's a must-read.
Read more
27 people found this helpful
Helpful
Report abuse

Barbara Black Peden
4.0 out of 5 stars One for the ages
Reviewed in the United States on January 28, 2014
Verified Purchase
I bought this ancient classic because I am guiding in an art museum, and this work has inspired so many artists. It's full of drama of the same kind we see in special-effects movies aimed at thrill-seeking youngsters these days. Beautiful young women turn into trees, gods cheat on their goddesses, virile young men speed through the sky seeking vengeance — that sort of thing. Really, it reminded me that human folly and frailty don't change over the centuries. All a great storyteller like Ovid needs is a good translator like this one.
Read more
2 people found this helpful
Helpful
Report abuse

D. P. Birkett
3.0 out of 5 stars Dryden not Ovid
Reviewed in the United States on December 27, 2001
Verified Purchase
(This review relates ONLY to the Wordsworth edition. Amazon.com lumps all translations together under Ovid as the author).
This edition is the "translation" by Dryden and some helpers into rhyming iambic pentameter couplets. It displays a certain viruosity but I am reminded of what someone said about Pope's Iliad "It is a very pretty thing, sir, but you must not call it Homer." Apart from being rather too free, you have the added difficulty of trying to read early eighteenth century English so that you have to translate the translation so as to understand stuff like:
"Now, with remorse his conscience deeply stung,
He drew the faulchion that beside her hung"
The excellent and erudite introduction by Garth Tissol is worth the price (which is commendably low)
Read more
5 people found this helpful
Helpful
Report abuse

Kathy Benson
5.0 out of 5 stars The Best Translation of The Metamorphoses!
Reviewed in the United States on June 7, 2016
Verified Purchase
Rolfe Humphries makes this ancient text sing in English. I projected the Kindle version onto a large screen in my high school classroom, bringing to my tenth grade classes Ovid's prescient insights and brilliant narrative.
Read more
2 people found this helpful
Helpful
Report abuse

JMN Reynolds
4.0 out of 5 stars Change
Reviewed in the United States on December 21, 2013
Verified Purchase
A witty book… Where change is the constant, but a pattern undergirds the change. A Roman view of theosis is particularly valuable at Christmas time to compare to the greater idea of the incarnation of Jesus.
Read more
2 people found this helpful
Helpful
Report abuse

Tom Lee
5.0 out of 5 stars Placing a major ancient world extant book...
Reviewed in the United States on September 11, 2014
Verified Purchase
Adopting from the traditions of the allied or inherited cultures and kingdoms reaches a turning point in this one. Also, both public and private college libraries either miss-shelve or overlook it when ordering it. It is a different book from Aurelius's book The Golden Ass (mule). Metamorphoses is more than contrivances for Roman humor only. From the Greek Iliad and Odyssey to the Roman's several books about their origins, this is the second of those several. Just wanted here to correct its place and help you understand the mass of abreviated Latin verses that a good portion of our ancient world mythological origins are told in. More work for either the archaeologist -- and just plain English student survey courses, or a good old book lover.
Read more
Helpful
Report abuse
See all reviews

jeremy blunt
1.0 out of 5 stars THIS IS THE WRONG BOOK!
Reviewed in Canada on March 27, 2019
Verified Purchase
Advertised as Ovid's "Metamorphoses," translated by Mary Innes ... this is actually "The Metamorphosis" by Franz Kafka.
Read more
Report abuse

Cliente Amazon
1.0 out of 5 stars This is NOT Ovid, this is KAFKA!!!!!!
Reviewed in Spain on March 27, 2018
Verified Purchase
If your expecting to read Ovid's poems, do NOT buy this book. This is Kafka's "Metamorphoses". I wanted to study the poem of "Pyramus and Thisbe", and the name of the author on the page said clearly Ovid. Shame on you.
Read more
Report abuse
Translate review to English
See all reviews
Back to top
Get to Know Us
Make Money with Us
Amazon Payment Products
Let Us Help You
EnglishChoose a language for shopping. United StatesChoose a country/region for shopping.
© 1996-2022, Amazon.com, Inc. or its affiliates