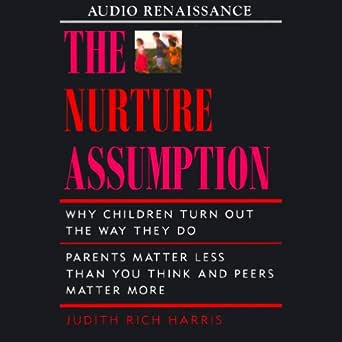 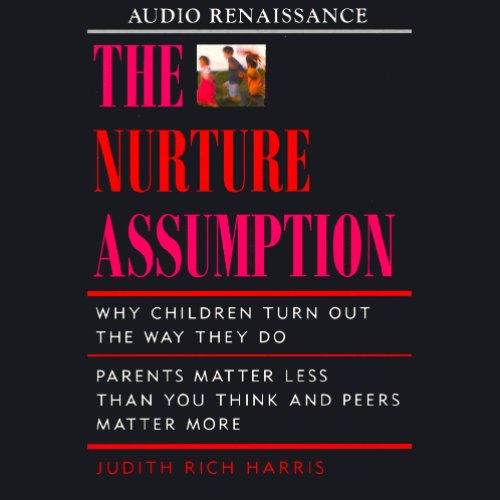 S. Kanitz
1.0 out of 5 stars Not everything is more the better
Reviewed in the United States on September 4, 2007
Verified Purchase
Harris uses 2x2 boxes, such as good father/bad father equals good-kid /bad-kid. Much to everybody's surprise, she concludes that good parents do not generate good kids, and better still, bad parents are not to blame for raising failures. She presents tons of research showing that the correlation is actually zero. Children are influenced by their peers. You are not to blame !!!
What is happening here is that 2x2 analyses can be flawed. It overlooks situations where both extremes may be bad, no love/too much love, for example. She overlooks a third possible parenting behaviour: the sensible middle ground. Harris never mentions the famous Parenting Rule of "Keeping a Healthy Distance" , which means supervise at a distance rather than smother kids with love or abandon to neglect.
We do not have the necessary data to make the conclusions Harris makes, most of it coming from small samples of raised apart twins, were 3x3 or linear analysis is not possible.
Her next conclusion might well be that school teachers and University professors do not make any difference on the outcome of their students, they actually learn from their peers, the same conclusion she presents in this book. If so why read her book , talk to your neighbours instead.

Busy Reader: Get To The Point
2.0 out of 5 stars So many pages, so few ideas.
Reviewed in the United States on April 19, 2008
Summary: Many people assume that parents' style and decisions in raising their children have great impact on the adults those children become. Psychological research, attempting to validate this assumption has failed. No such correlation has been demonstrated. The evidence for parental influence [beyond the child's genes] is weak. On the other hand, the influence of the child's peer-group has been underestimated. If you want to influence your child's development, pay close attention to the children he/she plays with before age 10. After age 10, your efforts may be futile.

Only the penultimate sentence in the preceding paragraph provides any useful information. It is the only useful idea in this book. In the other 400+ pages, Harris tells us what is wrong with the existing research on this subject. Her criticisms sound valid to me, but she repeats herself interminably and seems to think the book needs nothing else.

As an aside, I've noticed several books that make this assumption. Questioning the conventional wisdom is not an adequate subject for a good book. Play ball: tell us what is true and why.

When Harris FINALLY gets around to asserting a positive idea, her evidence falls short of the standards she sets for others. She quotes the story of Cinderella [repeatedly!] and the humorous writing of Dave Barry in support of her theory that "peers matter more." This was quite a disappointment. After all that build-up, I wanted to embrace her conclusion with confidence. Sadly, she comes off as a somewhat bitter reactionary, who chooses her interesting, provocative conclusion on no better evidence.

Deborah Lawford
5.0 out of 5 stars A brilliant scientific analysis of child raising
Reviewed in the United States on December 28, 2000
I'm a medical doctor used to critically evaluating scientific literature. My wife is an engineer, now studying psychology. We tried reading the "parenting advice" books by popular authors and when they didn't work I started looking at the sources of information referred to in the books. Almost none of it stood up to scientific scrutiny, being at best academic opinion and personal prejudice frequently far removed from the realities of child raising - particularly if you have children with difficult personalities. For instance, almost all of the "scientific evidence" against spanking children was simply deliberate deceit. Judith Rich Harris addresses it all and unveils the almost fraudulent assumptions behind a multi billion dollar industry of psychotherapy and "advice giving", most of which is simply impressive sounding fluff. At last somebody sensible has got some critical analysis into print.
I also recommend Dr. Robert Plomin's introduction to behavioural genetics, "Toddler Taming" by Dr. Christopher Green, "The difficult child" by Dr. Stanley Turecki, "The 7 worst things that parents do" by the Friels and "The myth of the first three years" .
Parents everywhere should read this book and realise the guilt that other authors have ladelled onto them was unfounded, and children should read it to understand that being told to hate their "abusive" parents is unjust. Policy makers everywhere should read some of these books before allotting ever increasing resources into the wrong areas of child rearing and implementing laws based on propaganda rather than sound scientific evidence.
Read more
10 people found this helpful
Helpful
Comment Report abuse
See all reviews

Pietro Bembo
5.0 out of 5 stars New light
Reviewed in the United Kingdom on June 16, 2016
Verified Purchase
Very interesting and this book sheds a new light on misconceptions that are accepted "as normal and standard" in modern western "nature & nurture" culture. The author has put a lot of research in this book which makes it even more convincing and powerful, just as it should be. I found out about this book by watching Professor Robert Sapolsky's lectures on youtube which is very interesting, although sometimes hard to follow but still recommendable and rewarding. Very happy with the book which was in top condition for a second hand one. Many thanks.
Read more
4 people found this helpful
Report abuse

eleanor
5.0 out of 5 stars rigorous - and surprisingly funny.
Reviewed in the United Kingdom on December 13, 2016
Verified Purchase
The author challenges a fundamental assumption made in child development theory that the environmental influences on children come predominantly via parents. She shows from studies in a range of fields that a child's peer group has a significantly greater impact. Accessible, rigorous - and surprisingly funny.
Read more
2 people found this helpful
Report abuse