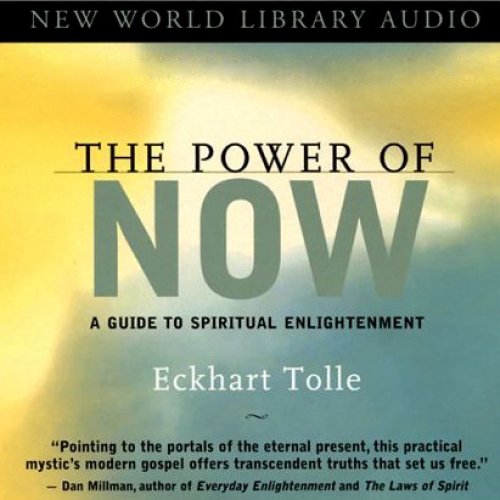 The Power of Now: A Guide to Spiritual Enlightenment

List Price: $20.00
You Save: $7.01 (35%)
By completing your purchase, you agree to Audible’s Conditions Of Use
Sold and delivered by Audible, an Amazon company
Share

4.7 out of 5 stars
4.7 out of 5
31,325 global ratings
How are ratings calculated?
To calculate the overall star rating and percentage breakdown by star, we don’t use a simple average. Instead, our system considers things like how recent a review is and if the reviewer bought the item on Amazon. It also analyzes reviews to verify trustworthiness.

JamiePNW
1.0 out of 5 stars Barely coherent ramblings
Reviewed in the United States on February 20, 2019
Verified Purchase
I ordered this book because so many people said it was a must-read. No, it's not. It's a bunch of rambling. Tolle uses pages and pages of borderline coherent blathering to say what could be summed up in one paragraph.
His writing style is unbearable. For example, "It is a misperception of your essential reality that is beyond birth and death, and is due to the limitations of your mind, which, having lost touch with Being creates the body as evidence of its illusory belief in separation and to justify its state of fear." JFC.
I finally put this book away for good after reading half of it. I really don't understand the book's popularity. It's like everybody is nodding, smiling, and singing Tolle's praises, when the reality is that nobody gets it because there is nothing to "get." But nobody wants to say it.
Read more
1,518 people found this helpful
Helpful
Report abuse

Amazon Customer
5.0 out of 5 stars Psychologist claims this is the best self-help book for anxiety or depression
Reviewed in the United States on October 5, 2017
Verified Purchase
I have over 25 years of experience as a clinical psychologist. This is hands down the best self-help book I have ever come across, and can not fathom why the very simple and straight-forward concepts Tolle presents were never once mentioned in my grad school training or any of the countless professional development workshops I have attended over the years. If you are dealing with depression and/or anxiety, this is the book to get. But you need to read it slowly, to take it in bit by bit, and actually pause to practice what he is explaining in each section to benefit from it. You can't just skim it and expect to understand it in a way that will open your life and help you experience the freedom and ease of this very moment. I keep it by my bed and re-read sections all the time. Thank you Eckhart!
Read more
880 people found this helpful
Helpful
Report abuse

Amazon Customer
1.0 out of 5 stars Unreadable
Reviewed in the United States on January 6, 2019
Verified Purchase
UGH. I was so looking forward to reading this book. I really wanted to learn something from it. I was truly hoping Tolle would change my life. I heard his name a lot from various "enlightened" individuals and I remember an interview with him on the Oprah show. Well, I couldn't read past the first chapter. It didn't resonate with me. I like reading about practical practices on bettering oneself. This one was way too new age-y and the tone was condescending. There's a lot of corny passages and long paragraphs that don't make sense. It made me feel dumb. It's suppose to make me realize that I should start living in the "now". Well right now, I just want to return this book to Amazon and get another one.
Side note: I tried to return it but Amazon is charging $5.99 to return it (shipping), the book costs $9.49. My refund total is about $3 and some change. Is it even worth the trouble of packing it up and going to the post office to drop it off?
Hmmm...maybe I'll just leave it on my bookshelf. The cover color is nice. It matches my decor.
Read more
551 people found this helpful
Helpful
Report abuse

Randall Best
5.0 out of 5 stars The answer we all want is simple but not easy
Reviewed in the United States on August 10, 2017
Verified Purchase
In 1969 I read Be Here Now by Ram Dass........and so my spiritual journey began. I knew the answers to much of humanity's suffering was right in front of me. I was simply unable to translate it to my own life and make it work. Hundreds of books, millions of dollars, two divorces, several kinds of anti-depressants, and 45 years later I found Eckhart Tolle. The book itself is amazing and transformational. My life changing experience however did not come from insight gained in the text. The preface which gave a brief but clear account of Tolle's own transformation completely overwhelmed me. I was completely engulfed by my personal connection to the author's own pain and fear before his journey began. Reading it over and over and shedding many tears, I knew without any doubt that beginning that day I would start my own journey into the present. Make no mistake I was fearful. But who am I without thought, judgment, or control ? I would gladly trade my ego for peace. On 3-5-15 I began an absolute commitment to stay present and live in gratitude. I told myself I would give it 6 months and just watch the process unfold without judgement. Staying present over time changed the way I lived each moment. Insight and epiphanies came at me from everywhere and I was certain I was finally on my path. However, where the rubber meets the road for me was that small space before a thought that staying present gave me. That small space is everything. With it you can watch your thought instead of being your thought.....or perhaps not have that thought at all. Simply come present again and feel gratitude. Easier said than done perhaps, but we all have the power of now if we so choose it. Eckhert Tolle gave me the courage to choose it and live it.
Read more
377 people found this helpful
Helpful
Report abuse
See all reviews

Mrs. C. Evans
1.0 out of 5 stars Gutted that I wasted a gift card on this rubbish
Reviewed in the United Kingdom on March 20, 2019
Verified Purchase
A dear friend recommended this book to me and it clearly affected her deeply. I tried really hard to get it, but struggled from the start. It's unbelievably boring. I could barely get through a page before nodding off. It's very repetitive, saying the same thing again and again. It also made so many ridiculous, unsubstantiated, pseudo-scientific assertions it was impossible to take seriously. For example, 'Emotional pain is also the main cause of physical pain and physical disease.' Try telling that to someone with a broken leg! Finally, I found it patronising and unrealistic, with a selfish and self-centred outlook. Anyone with responsibilities - dependent children or parents, a partner, a job, employees, bills to pay, voluntary roles - would be very irresponsible to ignore the future and live purely in the now. I was so relieved to read all the other 1* reviews and find that a small but significant minority felt, as I did, that this book is a pile of tosh.
Read more
237 people found this helpful
Report abuse

My Books
1.0 out of 5 stars Didn't finish it!
Reviewed in the United Kingdom on December 19, 2018
Verified Purchase
Far too much waffle about nothing in my opinion, don't really understand what the author is trying say. It seems he speaks from his own experience.

My recommended books are
Grow rich While You Sleep by Ben Sweetland
TNT: The Power Within by Claude Bristol
Psycho-Cybernetics by Maxwell Maltz
There's no waffle in these books.

Thinking habits apparently take 21 days to form so as they say, your result will reflect your efforts.

Your subconscious take notice of whatever you think and feel. Rather than listen to the author's videos on YT, I'd recommend listening to Bob Proctor who has studied success thinking for over five decades and was mentored by the late Earl Nightingale. By the way, there's two excellent recordings from Earl Nightingale on YT, The Strangest Secret and the condensed audio of Hill's Think & Grow Rich.
Read more
154 people found this helpful
Report abuse

ChemicalFreePlease
5.0 out of 5 stars A must read for anyone wanting to escape emotional pain or be free of the Self you are fed up with
Reviewed in the United Kingdom on March 9, 2018
Verified Purchase
Everyone should read this book. Eckhart Tolle is a spiritual teacher he guides you how to live in the Now and how to become aware of your chattering mind, how to deal with painful emotions, how to awaken from the preconditioned self - by this I mean the person you think you are but really its just a lot of ideas and beliefs coming from teachers, parents, religion, this book will free you from that old self and become free to live in the now.
Read more
179 people found this helpful
Report abuse

Jaime Tanna
5.0 out of 5 stars The most powerful book on Awakening, ever?
Reviewed in the United Kingdom on October 22, 2018
Verified Purchase
I read this book just after it first came out. Having re-read it several times now, referring to it whenever my life situations were difficult, I can say it is of extraordinary value. It has helped me become more Present and Conscious to this moment, and virtually all of my previous difficulties have faded into nothingness. Challenges do occur, of course, but the way I see them and approach them is vastly different to my former state. Highly recommended!
Read more
123 people found this helpful
Report abuse

@delemart
5.0 out of 5 stars An exceptional life transforming book
Reviewed in the United Kingdom on September 17, 2017
Verified Purchase
The book is very well written and easy to follow. Virtually all of the proposals and suggestions in it resonated with me. I would recommend it to anybody interested in connecting with their soul and attaining a state of infinite peace. I gave the book a 5 Star rating because I truly believe it had transformed my life and set me well and truly on the route to discovering and my soul and connecting with it. It has given me the power to control, instead of being controlled by, my mind
Read more
124 people found this helpful
Report abuse
See all reviews
Back to top
Get to Know Us
Make Money with Us
Amazon Payment Products
Let Us Help You
EnglishChoose a language for shopping. United StatesChoose a country/region for shopping.
© 1996-2021, Amazon.com, Inc. or its affiliates