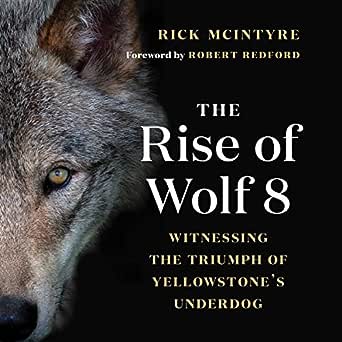 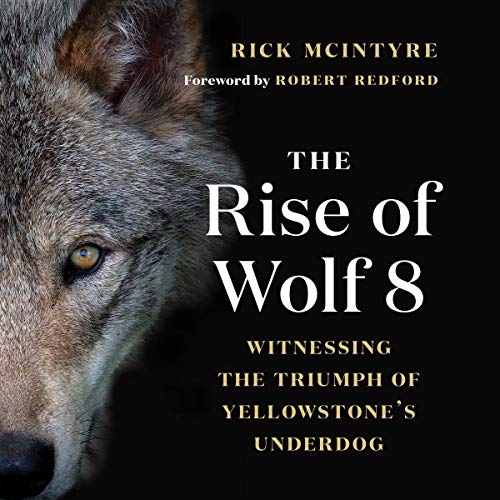 The Rise of Wolf 8: Witnessing the Triumph of Yellowstone's Underdog

4.8 out of 5 stars
4.8 out of 5
301 global ratings
How are ratings calculated?
To calculate the overall star rating and percentage breakdown by star, we don’t use a simple average. Instead, our system considers things like how recent a review is and if the reviewer bought the item on Amazon. It also analyzes reviews to verify trustworthiness.

Gary Hoshiyama
5.0 out of 5 stars The Wolves of Yellowstone and I: Beginning With “Hatchi”
Reviewed in the United States on October 24, 2019
Verified Purchase
So glad that friend, Rick, has written this first book of a planned trilogy of books of his life observing and studying Yellowstone wolves.
My wife and I had the privilege many years ago to be with Rick and seeing Wolf 8, “Hatchi”, and the eight Rose Creek pups (including Wolf 21) appear in the flats at Slough Creek. No doubt, Wolf 8 was on babysitting duty while Wolf 9 had some down time. What a treat that viewing was for my wife and me. Little did we know at the time that Rick was storing up this and other viewings of this family of wolves so that he could share his stories of Wolf 8.
We can’t wait for Books 2 & 3 to be completed and released. The books, no doubt, will tell the tales of the Yellowstone Wolves over Rick’s 24 plus years in the Park. But maybe more significantly the books will reveal more about this man who, arguably, has done more for the conservation and popularity of this premier predator in Yellowstone (that Rick has studied devotedly on a daily basis for the last 24 years) than has been done by any other person.
The books will represent a life’s achievement for him. We all dream of achieving something good in our lifetimes—to leave our “mark” so to speak—but many of us fall short due to a lack of sufficient dedication and/or commitment. Not Rick. He found his “love” and there was no lack of dedication or commitment in him. Anyone who knows him knows this.
Rick realizing this life’s achievement couldn’t happen to a more deserving person.
Thank you Rick for stirring up in my wife and me a passion of Yellowstone wolves that has now reached 25 years. Our lives have been enriched because of that passion that still burns so brightly to this day.

R. H. Holliday
3.0 out of 5 stars Highest praise for the Wolf Project, but not this book
Reviewed in the United States on November 28, 2019
Verified Purchase
I am clearly an outlier here. Let me try to be clear. I have the very highest respect and admiration for Mr. McIntyre in his deep devotion to the Wolf Project. The world is a better place with people like him doing such wonderful work. I have never had the privilege of seeing the results of this amazing project. His book did help “put me there “ in observing and being in awe of these amazing animals.

My criticism is with the book as a reading experience. For me it simply bogged down into just too much of the same. Without trying to be cute, after a awhile it became for me “I saw wolves. They did stuff.” Some of the encounters are indeed amazing (e.g. 8 and 38, and the final 21 and 8 event). But midway through the book I simply had to fast scan, as I got bored with the sameness of it all. Call me jaded, call me insensitive to nuance, call me whatever. I just got disappointed that the book overall did not grab me.

But again, if I failed to make it clear up front, Mr. McIntyre has my total admiration and respect for his singularly amazing dedication to and love of these amazing animals. The highest kudos to him for that work.

McIntyre, Alan
5.0 out of 5 stars The Yellowstone Wolves
Reviewed in the United States on November 20, 2019
Verified Purchase
I have read Rick's wonderful book twice. I am his brother and knew a lot about his life's work. Still, I was surprised at his detailed accounts of wolf watching.

Rick is a true story person first above everything else. Our mother lived to age 91, so she knew what he has achieved and was very proud.
Read more
14 people found this helpful
Helpful
Comment Report abuse

Debbie Hinchcliffe
5.0 out of 5 stars The lives of wolves!
Reviewed in the United States on October 15, 2019
Verified Purchase
Excellent historical review of the Yellowstone Wolf Project with incredible relating of personal encounters with these pioneering wolves. This could become a textbook.
Read more
15 people found this helpful
Helpful
Comment Report abuse

Jstar
5.0 out of 5 stars Great book from a great man
Reviewed in the United States on November 16, 2019
Verified Purchase
We saw our first wolf through RIck's scope about 9 years ago on our first trip to Yellowstone. Since then we have returned almost once a year to look for the wolves which was always look for Rick, then you know you have found the wolves. We have witnessed his patience first hand while surrounded by mobs of people. He always makes sure everyone gets a chance to look. We have had the pleasure to stand next to him and chat in the 20 below weather and we learn something every time. I am sure we just represent one of thousands of people who have been drawn back time and time again to the park with the hopes of witnessing the wolves all thanks to Rick. This book was a great insight into how he thinks and what is playing out between the packs within the park. I was excited to read that there will be more books to follow. We were just there a few weeks ago but after reading this I am reading to make the 14 hour drive back again soon.
Read more
10 people found this helpful
Helpful
Comment Report abuse

corgimom
5.0 out of 5 stars Yellowstone Wolf Ancestry!
Reviewed in the United States on November 13, 2019
Verified Purchase
Thank you for this fabulous book about Wolf 8M - stepfather to the great 21M! It was wonderful to hear the story about what a 8M taught 21M -- no question he was the biggest inspiration to 21's life. It took me longer than usual to read this book because I had just purchased Halfpenny's "Charting Yellowstone Wolves" and joined Halfpenny's Ancestry.com family tree on the Yellowstone wolves. Spent a lot of time on the Ancestry website looking at the life stories and photos of all the other Yellowstone wolves you mentioned in the book! Can't wait for the next two books in your trilogy!
Read more
11 people found this helpful
Helpful
Comment Report abuse
See all reviews

Chris Harrison
5.0 out of 5 stars Great book, great service
Reviewed in the United Kingdom on August 28, 2020
Verified Purchase
Looks like a great book, can't wait to get started on it
Read more
Report abuse

sammy
3.0 out of 5 stars Better title would have been “The Wolf Project”
Reviewed in Canada on June 16, 2020
Verified Purchase
A better - but less catchy - title for this book would have been “The Wolf Project” or “Wolves of Yellowstone”, because this is what the book is about. Over the course of years, Mr McIntyre tracks the various packs introduced to Yellowstone and gives us a glimpse into the lives of individual wolves, their personalities and their interactions with each other. Some wolves feature more prominently than others. So the book is not mostly about 8, as the title would suggest. 8 is only one among many characters that put in an appearance here and his story could have been told in fewer pages than this book. We meet 8 and stay with him in the first chapters of this book, by which time he has already risen to alpha status, and then meet him again briefly in the end. In between, the book reads like a series of entries in a logbook about wolves. Sometimes the details are fascinating, many times mundane. If this suits you, you will love the book. If you are looking for deft storytelling about an underdog wolf, you’ll be disappointed. I found Carl Safina’s storytelling of the wolves of Yellowstone more appealing with perhaps wider appeal to the public rather than just specialists in the field.
Read more
2 people found this helpful
Report abuse

katie
5.0 out of 5 stars A story of time and place, opportunity and influence
Reviewed in Canada on September 24, 2020
Verified Purchase
Particularly interested in this book since it profiles one of the wolves transferred from my locale to Yellowstone in the late nineties. It was interesting to follow his development and it’s outcome. Enjoyed the book, impressed with the devotion of the author to the relocation of wolves to the Park.
Read more
Report abuse

The Teller Of Truth
5.0 out of 5 stars EXCELLENT
Reviewed in Canada on December 11, 2019
Verified Purchase
An amazing book. Great story and ending.
Read more
Report abuse

jo
5.0 out of 5 stars was a gift so didn't read it but was delivered as stated
Reviewed in Canada on October 30, 2020
Verified Purchase
I assume the person likes it
Read more
Report abuse
See all reviews