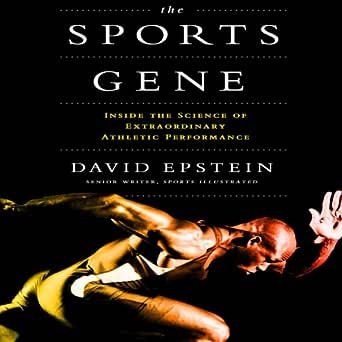 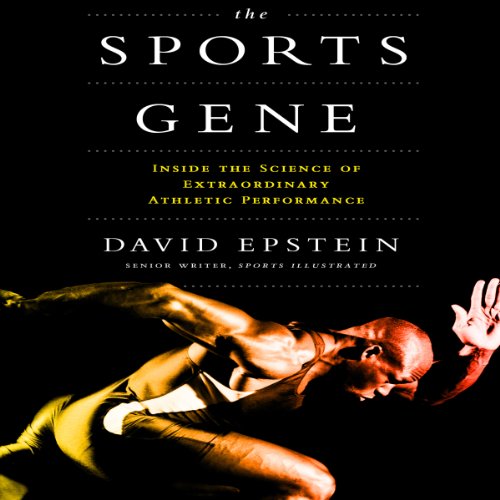 The Sports Gene: Inside the Science of Extraordinary Athletic Performance

4.6 out of 5 stars
4.6 out of 5
756 global ratings
How are ratings calculated?
To calculate the overall star rating and percentage breakdown by star, we don’t use a simple average. Instead, our system considers things like how recent a review is and if the reviewer bought the item on Amazon. It also analyzes reviews to verify trustworthiness.

David Warren
4.0 out of 5 stars The title is a puzzle
Reviewed in the United States on September 20, 2018
Verified Purchase
The title implies that there may be a "sports gene" (whatever that combination of words might mean), but the book is serious reportage of the interaction of some kinds of inherited characteristics (presumably expressions of genes) and training that seems to take advantage of them. The first quarter of the book is the most informative and thought provoking. The middle third looks like it might make a very good 200 page book about Kenyan and Ethiopian distance runners, and the book more or less staggers across the finish line with a bunch of random case studies. I discovered many new concepts and was entertained about 3/4 of the time, but guys, there is NO "sports gene" discussed or claimed in the book. Maybe a question mark at the end of the title would improve a buyer's understanding of what the book contains.
Read more
9 people found this helpful
Helpful
Comment Report abuse

Michael Carroll
5.0 out of 5 stars Extraordinary
Reviewed in the United States on September 17, 2014
Verified Purchase
This book is subtitled “Inside the Science of Extraordinary Athletic Performance.” In a word, the book itself is extraordinary. I have had a long interest in mostly all sports, have participated in many, and refereed basketball for many years. I have seen every level of ability and am drawn to stories of human performance, endurance, and physical improvement. I have seen enormous talent and am particularly intrigued by those who excel at the highest levels. Thus, I was inclined to find this work interesting. I found it to be even better than anticipated. Epstein captivated me with his anecdotes, analysis of clinical studies, and superb writing. I wholeheartedly endorse his work.

Epstein marvelously explains complex genetic processes and their effect on physiology while simultaneously discussing the influence of culture and environment on elite performance. Nature and nurture deftly described. Examples of each influence and their interplay abound, such as Albert Pujols’ inability to hit a woman pitching underhand; the trainability of a young Jim Ryan who couldn’t make his junior high track team yet became the first sub-four minute high school runner in a few short years; the remarkable sprinting of Jamaicans and the comparably astounding endurance of Kenyan and Ethiopian runners. These are just a few of the many fascinating performers highlighted in the book.

On the nature side, the author reports on the genetic research that reveals the role of genes and resulting physical capacities and/or weaknesses in areas such as visual acuity, muscle growth, limb length, fast and slow twitch muscles, aerobic capacity, oxygen usage and efficiency, energy efficiency based on body structure, testosterone, doping, and several others.

In respect to nurture, Epstein reports on studies describing the effect of geography, altitude, family, income, poverty, culture, motivation, drive, the 10,000 hours practice concept, etc. In every instance of performance there is a confluence of factors from both nature and nurture, the precise amount of each varying with individuals and being practically impossible to tease out. Researchers, however, continue to make new discoveries and fortunately there is a David Epstein reporting on and explaining the implications of this complex work.

While some gene mutations can enhance performance significantly , other mutations, as is well known, cause disease. The boundary line between these vastly different outcomes is not always or automatically clear. Epstein addresses this topic with feeling and candor as he describes sudden heart disease in young athletes, one of whom was a teammate and close friend. He also elucidates some of the genes implicated in brain insult along with injuries that result from damaged ligaments and tendons.

I had never read anything by David Epstein previously. His reporting of difficult scientific material was so clear, instructive and eminently readable that I will easily and eagerly reach for his next effort.

Brian LaRocca
5.0 out of 5 stars A Deep Dive into Atheltic Success
Reviewed in the United States on July 5, 2018
Verified Purchase
A great addition to the nature vs nurture debate, this book focuses on specific differences in genetics to analyze how material these effects are on athletic performance. The first third of the book starts a little slow but the reader is well advised to stay with it. Ultimately, the author concludes that a mix of genes, body types and hard work lead to gold medal performance.

The three real strengths of this book are 1) the fascinating examination of how pronounced high achievement clusters around certain ethnic groups 2) how different body types lead to sport specific excellence and 3) how well the author intertwines science with sports narrative to make a very entertaining read.

Examples of 1: In every Olympics since 1980, every finalist in the 100 meters has had West African ancestry. The author hypothesizes that this achievement is due to an adaptation that has mutated the ACTN3 gene to defend against malaria by limiting hemoglobin. This creates an environment great for sprinting but poor for long distances. Or, for long distance running, 17 American men have ever run a marathon in less than 2:10 while 32 Kalenjin men accomplished that mark in October 2011 alone.

2: Kalenjin boys are two inches shorter than Danish boys yet have longer legs creating a better pendulum effect when running long distances. Interestingly, it is thought that long and thin body types are optimal for low latitude, hot and dry environments since it allows for better cooling. Swimmers tend to be taller than sprinters but have shorter legs which allows the body cavity to act as a canoe in the water. In the 2010 NBA season, only two players had shorter arms than their height and the average arm length to height ratio was an abnormal 1.063.

3: Jerome Bettis had his nose broken during a game, had it patched up by having cotton balls inserted in his nose and then had those cotton balls propelled into his stomach after sustaining a vicious hit. Dennis Rodman was let go from his job as an airport janitor and then cleaning cars at an Oldsmobile dealer before a very fortuitous growth spurt.
Read more
8 people found this helpful
Helpful
Comment Report abuse
See all reviews

Paul D. Stevens author of "Survival Fish Harvesting"
5.0 out of 5 stars Usefully extends Gladwell's "Outliers" in the sports realm.
Reviewed in Canada on August 8, 2019
Verified Purchase
A fascinating look at high-level performance in sports and why it happens in a wide range of activities. Epstein has summarized the research current when he wrote the book and explained it in a way that is thoroughly accessible. His chapter by chapter list of notes and citations is 33 pages long which I appreciate. Many of the topics he examines bear further investigation. In particular myostatin inhibition for those losing muscle mass due to chronic illness or aging and the work with follistatin.

Richard Chartrand
5.0 out of 5 stars fascinating reading
Reviewed in Canada on September 6, 2014
Verified Purchase
Fascinating not only from the standpoint of elite athletes but also for the rest of us to both have more realistic expectations and to realize that different training methods while perhaps not making us elite athletes may be significantly more or less beneficial to us as individuals regardless of how well or not they work for others.

I believe also that this book is a reminder that if you have a genetic pre disposition for certain diseases such as heart problems, we shouldn't think we can dodge that genetic bullet because of watching how we eat or exercise, but that we can perhaps, delay the onset, reduce the severity, improve the odds of survival and speed up recovery if we do have an incident. Even if we are not successful in any of these, simply improving the quality of life that we do have is a worthwhile goal in itself
Read more
2 people found this helpful
Report abuse

Hannah Anderson
5.0 out of 5 stars Best Book!
Reviewed in Canada on February 23, 2020
Verified Purchase
I love this book! It is so amazing!
I personally got the paperback but hardcover is recommended if you are consistently travelling/bringing it in bags.

Highly recommend this book to anyone who loves learn about sports science and just how humans work in general. I have read this book like 5 times and I get something out of it every time. Great, great read!
Read more
Report abuse