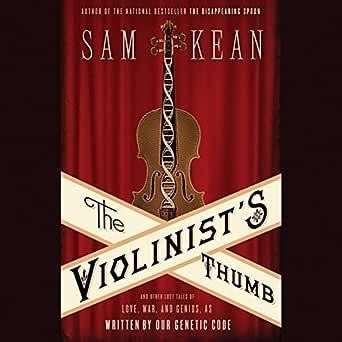 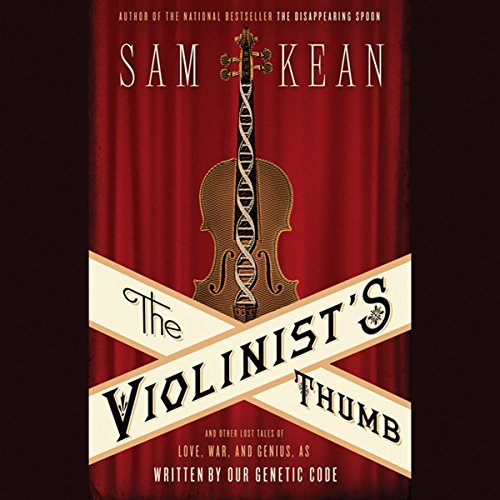 The Violinist's Thumb: And Other Lost Tales of Love, War, and Genius, as Written by Our Genetic Code

List Price: $28.50
You Save: $3.51 (12%)
By completing your purchase, you agree to Audible’s Conditions Of Use
Sold and delivered by Audible, an Amazon company

4.6 out of 5 stars
4.6 out of 5
483 global ratings
How are ratings calculated?
To calculate the overall star rating and percentage breakdown by star, we don’t use a simple average. Instead, our system considers things like how recent a review is and if the reviewer bought the item on Amazon. It also analyzes reviews to verify trustworthiness.
Top reviews

M. F. Crowl
4.0 out of 5 stars Scientists are only human!
Reviewed in the United States on August 23, 2020
Verified Purchase
There are many things to enjoy in this book, a good deal to astonish (in terms of what our DNA is and how it works) and a heap of stories about scientists, some of them hair-raising. If anyone ever talks to you in a way that implies scientists are second only to God, read them something out of this book. That will quickly bring scientists down to their proper level.

To my surprise it took a great deal longer to finish this book than I expected. It's 400 pages - so are many novels - but somehow I could only take so much of it at a time. And there are patches where I just had to go with the flow because I had no idea what he was talking about.

Nevertheless, still well worth a read.

emmejay
5.0 out of 5 stars Another terrific exploration
Reviewed in the United States on January 24, 2016
Verified Purchase
Paraphrasing Tolstoy:
"Perhaps all healthy bodies resemble each other, while each unhealthy body is unhealthy in its own way."

That's Sam Kean, in another terrific collection of stories about science and scientists, this one on genetics and DNA and inspired by his own genes -- haha! his parents, Gene and Jean.

It gives the fundamentals of DNA (its discovery, structure (including sequencing) and function) and touches on so many topics that have become known (or better understood) in the decades since my coursework -- of most interest to me are the incorporation of bacteria and viruses into our cells and DNA, and the environmental activation and suppression of genes that is the field of epigenetics. It’s awe-inspiring ... and hmm, as we look at lower animals and attribute so much of their behavior to instinct, I wonder if we’ll eventually understand our own species enough to see that some of what we attribute to free will is actually biology?

Edward R. Groszewski
5.0 out of 5 stars Very readable and informative
Reviewed in the United States on March 20, 2013
Verified Purchase
Two books for the price of one is a good deal, but when both books are engaging, it's a great deal. Sam Kean's volume can conveniently be divided into a first half that's an exposition of what we know about DNA and genetics, and a second half devoted to how this science has played out in prehistory, historical eras, and the lives of individuals.
A strong science background makes it easier to understand the first half of the book. Unfortunately, I don't have one. My last formal encounter with a science course occurred forty-eight years ago, when I took Astronomy. (Or maybe it was Astrology. It was the '60s. I don't remember), and I barely passed. In spite of this spectacular ignorance, Kean managed, by sheer verbal firepower, to actually teach me a little about DNA. I think he figured that the subject was difficult enough, so let's make the language clear and direct. He did good.
When Kean turns to explaining how this science can help us better understand the past, and even some specific personages, I picked up the pace. I have to be honest: when most scientists try to write history, they usually produce the raw material for a compost pile. Kean beats the odds. Some of what he writes about are the quirky footnotes to history that remind you that history is about real people. It's Paganini's DNA and resultant anatomy that provides the background for the title, "The Violinist's Thumb." (If he had decided to let Toulouse-Lautrec's anatomy inspire the title, the book would have topped every best seller list.) Even when Kean delves into more serious topics like the relationship between Neanderthals and Homo sapiens, he resists the temptation to lapse into jargon and confuse his reader.
Kean's style respects his readers. For example, he explains how DNA, natural selection, and sexual selection all work together to create our "lust for art." This can get pretty abstract, and I begin wondering if it's the late hour or the second Jameson's that's fogging my cranium. Then Kean interjects this, "Now, if talents on a par with Matisse or Mozart seems a trifle elaborate for getting laid, you're right;..." Whoa! I'm back in focus.
I have no idea how serious scientists regard this book, but for the layperson who is interested in learning more about modern research into DNA, one can hardly do better.
Read more
20 people found this helpful
Helpful
Report abuse
See all reviews

Tracy CompulsiveReaders
5.0 out of 5 stars The Violinist's Thumb
Reviewed in the United Kingdom on July 30, 2019
Verified Purchase
Bought for my son who is studying BioChem and he really enjoyed it.
Read more
One person found this helpful
Report abuse

jen60
4.0 out of 5 stars Goes on a bit?
Reviewed in the United Kingdom on September 5, 2019
Verified Purchase
It started well with lots of interesting information, then a third of the way through I started glazing over?
Read more
Report abuse

Ms Vivien E Payne
5.0 out of 5 stars Fascinating and easy to read
Reviewed in the United Kingdom on April 26, 2017
Verified Purchase
This is a fascinating and easy to read history and account of the study of genetics, written with a down to earth style and with a wonderful sense of humour. I would recommend it to anyone interested in this subject. I really enjoyed it. And you don't need a degree to understand it, either!
Read more
Report abuse

Teraza Salmon
5.0 out of 5 stars Brilliant writing style
Reviewed in the United Kingdom on September 26, 2016
Verified Purchase
it's like you are talking to someone at a party. funny, informative, clear and easy to follow. I throughly recommend this book if you are interested in DNA/science/history. I will be looking out for more from this author. if you like Mary Roach, you will enjoy this.
Read more
Report abuse