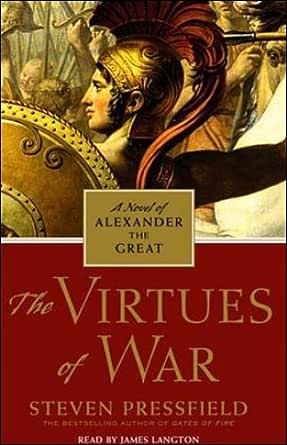 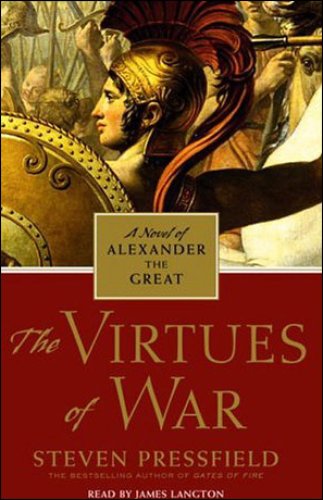 The Virtues of War: A Novel of Alexander the Great

The Virtues of War: A Novel of Alexander the Great
Steven Pressfield (Author), John Lee (Narrator), Books on Tape (Publisher)
Get this audiobook free.
$14.95/mo after 30 days. Cancel anytime

4.5 out of 5 stars
4.5 out of 5
376 global ratings
How are ratings calculated?
To calculate the overall star rating and percentage breakdown by star, we don’t use a simple average. Instead, our system considers things like how recent a review is and if the reviewer bought the item on Amazon. It also analyzes reviews to verify trustworthiness.
Top reviews

Alex Bush
5.0 out of 5 stars Good Alexander the Great primer, GREAT exploration of ancient Greek soldier ethos
Reviewed in the United States on February 24, 2015
Verified Purchase
Awesome book. "Virtues" is the first Steven Pressfield novel I've read after reading "The War of Art" but I immediately ordered "Gates of Fire" and imagine myself working my way through the entirety of his work over the next couple of months.

'Virtues" serves as an engaging introduction to the life of Alexander the Great and is engaging and powerful as a work of historical fiction. But where "Virtues" truly excels is in capturing the under arching concepts and motivations that shaped Alexander's worldview and drove him to the ends of the earth. Both the nobleness and ruthlessness of Alexander's warrior philosophy is in many ways alien to our current culture and way of thinking, but is an extremely valuable many of thinking to be exposed to.

The lofty, elevated plane of many ancient Greek ideals have long fascinated me (I am not alone in this) and "Virtues" succeeds in capturing much of their essence through the eyes of the greatest Greek conqueror of all, and perhaps the greatest front line soldier-king the world has ever seen.

"Virtues' also contains many gems about leadership, tactics, and politics which are highly transferable to our current age. By the time I was done the top of my copy had become a pincushion of post-it notes, each marking a passage revealing something valuable about strategy, leadership, or the nature of human emotions.

Read this book. (And then keep going)

ABCDEFG
5.0 out of 5 stars A distillery of fighting spirit
Reviewed in the United States on May 17, 2017
Verified Purchase
This book belongs on every mans shelf. I was given a copy while in Afghanistan, it took me some time to finish the book. So vividly is Alexander written, and so accurate his personality of a commander, that I let my own historical knowledge of Alexander dread the ending of the story. Here is a fictional character that I would wish to emulate, here is a fictional character that I would want to have known, and here is a story that I wish would never have ended. But all stories must end, as do lives. Seeing that we end them both well is the moral of this book.
Read more
12 people found this helpful
Helpful
Comment Report abuse

Richard
4.0 out of 5 stars Poignant Portrayal
Reviewed in the United States on May 22, 2019
Verified Purchase
This historical fiction novel about Alexander of Macedon is very well done. The narration of the story is in the person of Alexander but there is an unknown person who appears to witness the interaction between Alexander and his confidante Itanes. The novel addresses the massive geography conquered by the Macedonian, and many details of combat, weaponry, and strategy. For the men of Alexander's world, both warriorship and male sexual bonding were thought to bestow manhood; hence, the cultural standard for masculinity was quite different from ours. The author does not detail the latter, unlike some other writers. The writing is tight - not an extra, unnecessary word! I found the author's style and technique quite brilliant. Recommended for those who enjoy pre-Hellenic history and Alexander's exploits.
Read more
One person found this helpful
Helpful
Comment Report abuse

Jacob Howard
4.0 out of 5 stars This book was a fun journey through the life of Alexander and it was ...
Reviewed in the United States on November 13, 2017
Verified Purchase
This is a fiction book. It's historically imagined by the author. Please understand that. It's based on the real events, it's based on historically preserved documents however there is some "filling in the gap" ...

This book was a fun journey through the life of Alexander and it was enjoyable to feel as is I were there during his battles, in his toughest moments of tactical military decision making, as well as the more lengthy and calculated empire building ones too. I'm left wondering what the cover art is so I can get a copy of the painting to add to my collection.
Read more
3 people found this helpful
Helpful
Comment Report abuse

REV VINCENT
5.0 out of 5 stars An epic Tale about one of the World's Greatest Warriors
Reviewed in the United States on July 25, 2006
Verified Purchase
Passing in Review

"The Virtues of War", written by Steven Pressfield

If you believe as I do that some people have lived previous lives at earlier times in history, then you will understand when I say that Steven Pressfield must have been an Ancient Greek warrior. Pressfield so affectively captures this time in world history it is all but impossible to believe he did not live it.

Pressfield has uniquely embedded himself into the personality of Alexander the Great in "The Virtues of War", lifting Alexander fully to life. This work is a narrative, Alexander telling the history of his battles to his brother-in-law Itanes, a brother of Alexander's bride Roxanne. It is fiction. Yet, is it really?

Even in fiction there must be some reality, some certainty, some truth. Pressfield brings to life that epic warrior, Alexander the Great, superbly. The battles are not the only challenges to face this Greek (Macedonian) warrior. Among his own men Alexander must mentor, reassure, scowl and scold. He must mentor, parent, coddle and punish.

At the beginning of "The Virtues of War", Alexander the Great is still a young man under the tutelage of his father, Philip. Upon the assassination of Philip, Alexander rises to and ultimately reaches his zenith as King. Pressfield does an excellent job revealing both Alexander's inner turmoil and his outer turmoil. Pressfield frequently refers to Alexander's "daimon", Alexander's inner god or alter ego. We each have one. Few ever capture or meet it. Alexander does.

"The Virtues of War" is not simply a book about war in an ancient time. It is also about psychology, the interaction of men hardened by battle after battle and then softened and spoiled by the rewards of their conquests. The few places where this work gets bogged down is in the detail of the makeup of the warring factions; how many of each component and what each component is by tribe or nation. Otherwise, this work flows well, keeping the reader engrossed in a tale boldly told.

While "The Virtues of War" is fiction, it is evident that Pressfield has considerable knowledge about this time in history and the cultures about which he writes. Some passages presage the warrior's dilemma in today's contemporary, modern world. Or, has Pressfield's clever looking backward through the lens of history injected that presage into history already passed?

Surely, this work must have been a labor of love for Pressfield, as there is so much energy in it. To create the detail that falls upon every page, to animate and resurrect Alexander the Great as if he lives today and to capture the personality not only of that epic warrior but those who served him well is no minor feat. "The Virtues of War" is a must read for anyone who enjoys reading about military action. While the reader will acknowledge this work as fiction, one cannot help coming away from it with that haunting question, "Where does fiction truly end and truth actually begin?"
Read more
8 people found this helpful
Helpful
Comment Report abuse

Billy Mac
2.0 out of 5 stars Not recommended
Reviewed in the United Kingdom on November 24, 2020
Verified Purchase
The author seems to believe that prose written in the style of a Greek philosopher adds to the readers enjoyment of the story, in my case it doesn’t and I skipped over a lot of this in reading the book. He also considers that telling the reader in details of disposition of the armies before a battle is important, and educational. Unfortunately I found this irritating and skipped over these sections.

Not the best of this type of fiction I have read. I don’t wish to be educated but prefer to enjoy the excitement of the battle and found this book lacking in excitement and to be honest a bit boring.
Read more
Report abuse

Charles Vasey
4.0 out of 5 stars The View From The Top
Reviewed in the United Kingdom on October 25, 2013
Verified Purchase
This is an interesting attempt to see the remarkable reign of Alexander the Great through the eyes of the noble Argead himself. We all tend to populate well-known figures with our own estimate of how they functioned, get this wrong and you've lost a reader, get it right and you've lost another reader somewhere over there. Pressfield's approach is to major on two features. Firstly, his battle scenes are set in confusion as Alexander rides with his Companions in the dust and murk of battle. Enemy units appear and disappear (and in at least one case reappear), horses tire, discipline is lost and regained. This fits well with what one reads of cavalry combat in later, better recorded, eras. Secondly, Pressfield conceives of Alexander as "a veray parfit gentil knight", he enjoys combat, he respects his enemies, he fights for honour and for love. However, amidst this is the raging Alexander given to sudden bloody retribution.

The problem with "diaries" is that they look from one point of view. It is also their strength.
Read more
2 people found this helpful
Report abuse

Dr Barry Cripps
5.0 out of 5 stars Alexander The Great is truly named- not a King but a superb soldier, a General, a leader of men.This is a remarkable book tracing his life from birth to death
Reviewed in the United Kingdom on November 7, 2020
Verified Purchase
A long read, easy to pick up and put down. The reader enters his life and psyche but never really understanding his daemon
Read more
One person found this helpful
Report abuse

ged
3.0 out of 5 stars Not for me
Reviewed in the United Kingdom on November 17, 2020
Verified Purchase
I’m still reading this. First person narrative, very detailed but somehow characterisation seems shallow.
Being some 40% into the book I am reading it as a challenge as opposed to entertainment
Read more
Report abuse
See all reviews