You've subscribed to Office Intrigue! We will preorder your items within 24 hours of when they become available. When new books are released, we'll charge your default payment method for the lowest price available during the pre-order period.
Update your device or payment method, cancel individual pre-orders or your subscription at
Your Memberships & Subscriptions
There was an error. We were unable to process your subscription due to an error. Please refresh and try again. 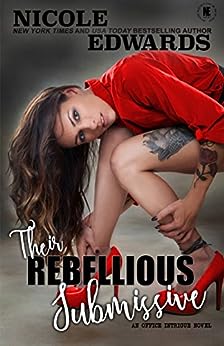 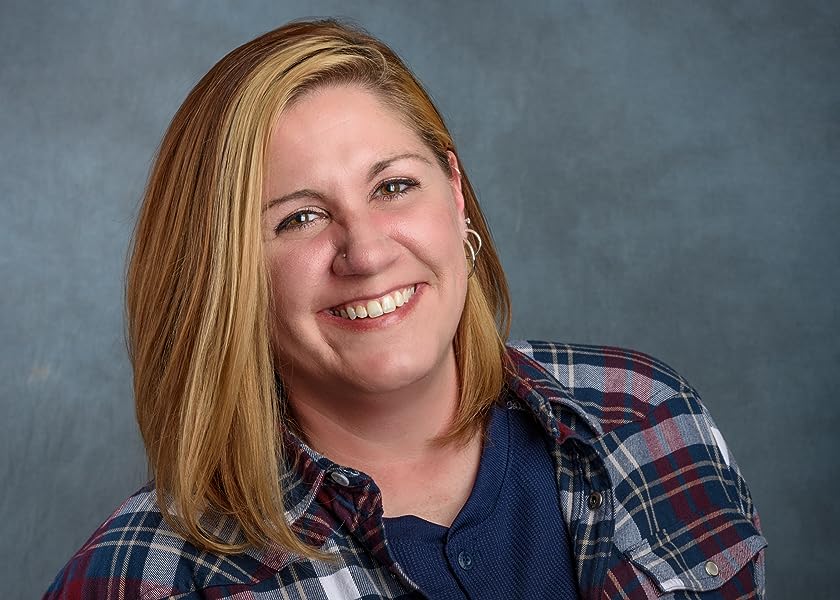 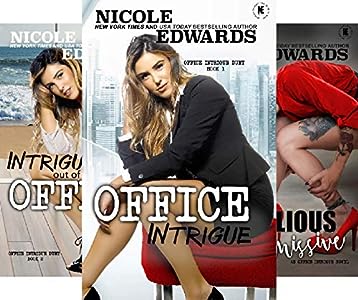 4.7 out of 5 stars
4.7 out of 5
112 global ratings
How are ratings calculated?
To calculate the overall star rating and percentage breakdown by star, we don’t use a simple average. Instead, our system considers things like how recent a review is and if the reviewer bought the item on Amazon. It also analyzes reviews to verify trustworthiness.
Top reviews

Have you ever read one of Nichol Edwards books? I love her books. She has a way of drawing you in with her writing and she doesn’t let go until you read The End and even then she doesn’t let go because you know there is another book coming in this series. Their Rebellious Submissive was a page turning, sexy as f…. book to read!

We first read about Ben & Justin in the beginning 2 books in the Office Intrigue series. They have been together for a few years now and Justin has been knowing that Ben (who is a switch) wants to bring in a female. And, as fate would have it they happen to be in the right place at the right time. They haven’t been going to Dichotomy for a bit and they were there the night Addison is beaten by “her master” Josh. A very bad Dom. Ben and Justin save her from Josh.

5+ freaking hot stars for Their Rebellious Submissive. And, bring on the next book in this series. I am ready to read it!
Read more
2 people found this helpful
Helpful
Report abuse

Cheri
5.0 out of 5 stars 4.5 stars
Reviewed in the United States on January 31, 2018
Verified Purchase
Sometimes wishes come true. In my review of Intrigue Out of the Office I said I was hoping the author would give Ben and Justin their HEA. Yay! I didn’t have to wait long at all. Not only did the Office Intrigue Duet continue past the originally intended two books, but Nicole Edwards has said it will continue to grow as the office in the stories is continuing to grow.

This one certainly grabbed me from the start. Since I knew who this story was about, in the back of my mind I kept telling myself that things would turn out okay. But the initial situation in which we’re introduced to Addison was brutal. I already knew that I loved Ben. I liked Justin well enough, but he’s the more reserved of the two. But the first scene to take place in his apartment at the beginning just melted my heart and really showed me that sweet and loving side to him.

Things moved quickly between Addison, Ben, and Justin. What was great was how it was acknowledged by all. Maybe not to each other, but at least internally by the characters. On top of that, it was mentioned more than once that Ben and Justin have been in a committed relationship for many years and have, like all couples, have their ups and downs. They are secure in their relationship and do not fear spats, large or small, due to their faith and love in each other. This causes some issues with Addison as it’s been a long time since they’ve had to worry about a person in their relationship not knowing what their moods and actions mean. She’s new to them and has her own baggage. She doesn’t necessarily know that one disagreement won’t mean the end, and she tends to act out when scared.

I loved so much about this story, but was hoping for a bit more of the back story with all the characters. We get a more insight into Ben and Justin than we had from the previous books, but not a whole lot. And, although we get Addison’s back story, we don’t really get to the meat of her issues. Since I found this to be a spectacular story, I cannot even imagine how excellent it would be with a bit more depth into these backstory issues.

With this book, I would highly recommend you read the first two in this series first. I think you will miss a lot in the character of Justin and Ben if you don’t and their story may not speak to you the same way it does to those of us who have read the first books.
Read more
3 people found this helpful
Helpful
Report abuse

Simon Says
VINE VOICE
4.0 out of 5 stars Super hot...but a little too much submissiveness for me
Reviewed in the United States on February 17, 2018
Verified Purchase
No cliffhanger
Standalone though part of a larger series
Told from 3 POVs
Minor editing issues

I read the first 2 books in this series, and while they weren't my favorite by this author, they did leave me wanting to know more about Ben and Justin so I had to purchase this book to find out if they would receive their happily ever after.

Don't get me wrong, it was a super hot book and the author did a great job building up the characters, adding in a touch of angst to keep things interesting and a whole lotta steamy scenes, but there is just something about needing a man to pick out your outfit everyday that just turns me off.

If you are into that sort of thing though this is definitely your book.
Read more
3 people found this helpful
Helpful
Report abuse

Elaine Kelly
5.0 out of 5 stars I can't wait for more!
Reviewed in the United States on July 2, 2018
Verified Purchase
Justin and Ben where looking for a submissive to fullfill their needs in and out of the office but also in their personal lives. One night their at the club when things went haywire, the found a girl who's dom was being an absolute degrading to her so they stepped in and from that moment they wanted her to be theirs!
Addison was looking for something but hadn't found it until that faithful night at the club amd then walked in the beautiful Ben Snowden, he had taken her by surprise but so had Justin Parker!
I was intrigued by this story of three beautiful people, they had their ups and downs but also had a love that was never ending. I laughed and cried but in the end. I felt like I was part of the story!
Read more
One person found this helpful
Helpful
Report abuse

Rosa Harrington
5.0 out of 5 stars Wow she did it again ❤️
Reviewed in the United States on January 25, 2018
Verified Purchase
OMFG Nicole Edwards did it again. She blew this out of the park and to the moon and back. Poor little Addison the submissive who grew up in foster care and never had any one to live her. The switch Mr. Snowden who loves his Dom and is waiting for his Dom to say I Love You. The Alpha Dom Mr. Parker who is too afraid to tell those he loves that he loves them. Be prepared to have a water bottle and a fan cause you will need it to cool down after the sex scenes. Will Addison find her happy ever after,will Mr. Snowden get his I Love you and will Mr. Parker say his 3 little words to his submissive? Run don’t walk and read this book and you will get the answers to those questions. Thank goodness Nicole released this in January if you get to hot you can always step outside and cool off.
Read more
Helpful
Report abuse
See all reviews

Zena Foster
5.0 out of 5 stars Hot, hot, hot addition to a great series
Reviewed in the United Kingdom on February 3, 2018
Verified Purchase
I love everything Nicole writes, this book is no exception. She takes you to places you never knew you wanted to go.
This book was a pleasant surprise as I guessed it would be a two book series, I'm so glad Nicole has extended it and that there is more to come. This book is Justin, Ben and Addisons story and what a scorcher it is too.
I'm loving this series!!
Read more
Report abuse

Kindle Customer
5.0 out of 5 stars Their Rebellious Submissive
Reviewed in the United Kingdom on January 25, 2018
Verified Purchase
Absolutely fantastic! Loved every bit of it. From start to finish couldn't put it down. Was really looking forward to reading the next book in the series and wasn't disappointed. Would definitely recommend reading this series.
Read more
Report abuse

Allison hewitt
5.0 out of 5 stars Fantastic
Reviewed in the United Kingdom on February 12, 2018
Verified Purchase
As with all Nicole books this was well thought out with a great storyline and fab characters that you can't help but love.
Read more
Report abuse

For those that are fans of Ms Edwards we all know that Justin and Ben have been together for almost ten years. They're the perfect Dom and Sub and sometimes they're both Doms, since Ben's a fabulous switch. In the year that Luci started working at their PR business Ben and Justin, Landon and Langston have all shared Luci, as she worked with them as their PA/secretary, until Luci and the Moore boys fell in love with each other.

It's been five months since the five of them played together and now that romance is in the air, Luci, Landon and Langston are exclusive and monogamous leaving Ben and Justin to themselves. Our remaining two men have been searching for that perfect sub/secretary of their own. They stumble across Addison quite by accident one night at Dichotomy, the BDSM club where they're all members. When Addison is involved in a nasty scene Ben and Justin save her from her nasty a-hole employer/boyfriend/pretend Dom and whisk her away to safety, their coming together sets of a new path for Addison and exposes her to how real a Dom should act with their submissive. It also allows Ben to switch from being Justin's submissive to Addison's Dom something that he has wanted and needed to explore for years.

Like all Ms Edwards work, this installment was excellent and smoking hot and seriously no-one writes 1st POV menage like her, it was fabulous. With the arrival and inclusion of Addison to the Office Intrigue series, Ms Edwards allowed the partner's PR business to grow ( so the series could expand) as well and included new characters we only had glimpses of previously, like Dale, Jordan's' submissive, Master Greg Edge, Mistress Jane and Master Zeke.

By her own admission Ms Edwards is intending to continue this series with the newest characters and I cant wait for the new book.

Plus seriously who doesn't want to read the 1st two books?
Read more
One person found this helpful
Report abuse
See all reviews