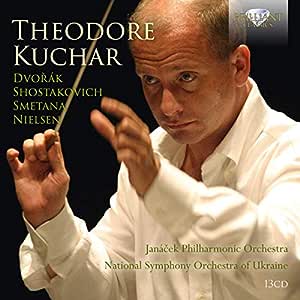 JANACEK PHILHARMONIC ORCHESTRA; NATIONAL SYMPHONY ORCHESTRA OF UKRAINE (Artist) Format: Audio CD
4.6 out of 5 stars 3 ratings
See all 2 formats and editions Hide other formats and editions
Available at a lower price from other sellers that may not offer free Prime shipping.

In the extensive booklet interview, the conductor Theodore Kuchar recalls how, as a boy growing up outside Cleveland to Ukrainian-born parents, he learnt his music at the feet of Lorin Maazel, sitting in the cheap seats every week. Sound training and determination took him to Helsinki as violist and part-time conductor for the Finnish Opera, thence to Brisbane for his first musical directorship in charge of the Queensland Philharmonic. But it was in 1992 that Kuchar discovered his roots and began to establish an international reputation when he took over the National Symphony Orchestra of the Ukraine. Together they have given lengthy tours worldwide, hundreds of concerts and made many recordings for several labels. The theatre music by Shostakovich was particularly successful and holds a treasured place in Kuchars heart: The Bolt is absolute genius. Ive done it with every orchestra Ive had a long relationship with, and every time it knocks an audience sideways. In the early 2000s Kuchar also worked regularly with the Janácek Philharmonic Orchestra based in Ostrava, formerly known as the Czech Radio Orchestra. Together they recorded the major and most of the minor orchestral works by Smetana, the best-known tone-poems of Dvorák and even the complete symphonies of Carl Nielsen, which became a critical hit. Since then Kuchar has conducted orchestras throughout Europe, Asia and the Americas. As music director of the Orquesta Sinfónica Venezuela he led a vibrantly colorful collection of Latin-American orchestral classics (by Ginastera, Moncayo and Revueltas among others) for the last album on this retrospective, recorded in 2011. Theodore Kuchar is one of today's most dynamic, most successful young conductors every instrumental effect comes through beautifully Tempos are generally rapid and spirits high this is a lot of fine Dvorák for a very low price. (Fanfare)