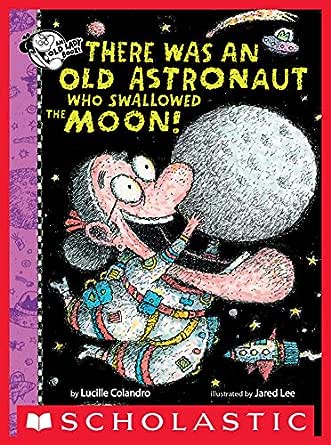 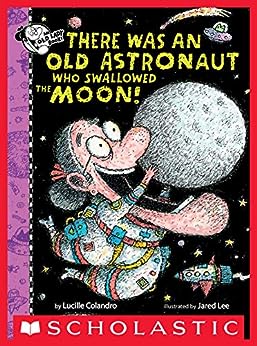 There Was An Old Astronaut Who Swallowed the Moon! (There Was an Old Lady) Kindle Edition

PreS-Gr 2-In this fun retelling of the popular rhyme, the omnivorous old lady is an astronaut. She starts off by eating the moon, a star, a planet, a comet, a meteoroid, a rocket, and, eventually, a satellite. It is then revealed that it was her imagination and that all this time she was in a planetarium observing space up above from the museum. Each rhyming ­sentence is followed by a true fact about the item being swallowed. The exaggerated ­cartoon drawings highlight the nonsensical elements of the story, and more detailed material about the celestial bodies is appended. VERDICT A great introduction to early readers who are beginning to learn about space, who will laugh about the ­adventures of the old astronaut and learn valuable information at the same time. Great for school and library ­collections.-­Annmarie Braithwaite, New York Public Libraryα(c) Copyright 2011. Library Journals LLC, a wholly owned subsidiary of Media Source, Inc. No redistribution permitted. --This text refers to an alternate kindle_edition edition.

Lucille Colandro has written many books for children, including the bestselling There Was an Old Lady series illustrated by Jared Lee.

Jared Lee has illustrated more than 100 books for young readers. He has received awards from the Society of Illustrators, the Martha Kinney Cooper Ohioana Library Association, the National Cartoonists Society, and others. He lives in Ohio with his wife and a menagerie of dogs, cats, ponies, ducks, and a few unknown creatures.
--This text refers to an alternate kindle_edition edition.

Praise for There Was An Old Astronaut Who Swallowed the Moon!:"Colandro offers an enjoyable readaloud filled with outer space facts, including back matter with vocabulary definitions and a search-and-find activity." -- Publishers WeeklyPraise for There Was An Old Mermaid Who Swallowed a Shark!:"This underwater romp is at once funnier and more educational than 'There Was an Old Woman Who Swallowed a Fly.' Verdict: The rare book that's perfect for at-home reads and rereads as well as for storytime." -- School Library Journal

Praise for There Was An Old Astronaut Who Swallowed the Moon!:"Colandro offers an enjoyable readaloud filled with outer space facts, including back matter with vocabulary definitions and a search-and-find activity." -- Publishers WeeklyPraise for There Was An Old Mermaid Who Swallowed a Shark!:"This underwater romp is at once funnier and more educational than 'There Was an Old Woman Who Swallowed a Fly.' Verdict: The rare book that's perfect for at-home reads and rereads as well as for storytime." -- School Library Journal --This text refers to an alternate kindle_edition edition.
Read more

4.8 out of 5 stars
4.8 out of 5
428 global ratings
How are ratings calculated?
To calculate the overall star rating and percentage breakdown by star, we don’t use a simple average. Instead, our system considers things like how recent a review is and if the reviewer bought the item on Amazon. It also analyzes reviews to verify trustworthiness.
Top reviews

Joshua
3.0 out of 5 stars Jumping the interstellar shark here a bit
Reviewed in the United States on September 6, 2020
Verified Purchase
This is the first in this series by the same author and illustrator that just seems like they spitballed ideas to add another book to sell as opposed to something that is fun to read/sing and from which kids can acquire vocab. The words no longer fit in the traditional song structure (try singing "There was an old astronaut who swallowed a meteoroid" and you'll see what I mean) and the interstellar objects could have been better thought out and selected (explaining the distinction between a comet and meteoroid--both of which are things the old astronaut swallows in the book--to a toddler was not easy, and I took an introductory astronomy course in college). One redeeming aspect is that each page contains a little fact about the object on the page in a rhyming two-sentence blurb, and those were the main items I focused on while reading the book.

In sum, I strongly recommend other books in this series, but not this particular one.
Read more
Helpful
Report abuse

Tank
4.0 out of 5 stars 5 year old loves it!
Reviewed in the United States on October 18, 2019
Verified Purchase
My 5 year old loves these books and loves astronauts so I thought this one would be a win win for us. He loves it, but I'm not crazy about how this one was written. He's happy so I'm giving it 4 stars.
Read more
One person found this helpful
Helpful
Report abuse

E. Carnes
5.0 out of 5 stars Planet eating fun!
Reviewed in the United States on December 14, 2019
Verified Purchase
My space obsessed kiddo loves this one. Even though it is filled with inaccurate rockets and goofs - it is so delightfully outlandish that he just laughs the whole way through. Even asking for the other editions - despite these tall tales not being space related in the slightest. Beautiful - fun and whimsical - this may be one my favorites to look at in the series.
Read more
Helpful
Report abuse

sweet tennessee
5.0 out of 5 stars My daughter loved it.
Reviewed in the United States on October 31, 2019
Verified Purchase
Not my favorite book to read, but my Space obsessed 6 year old LOVES it!!! She loved the repetition and was yelling out the next line before I could read it. I loved the illustrations and found myself doing the image searches while I was turning pages. I don’t think you’ll be disappointed with your purchase... I’m already grabbing a few more from this series.
Read more
Helpful
Report abuse

My Two Cents
VINE VOICE
5.0 out of 5 stars Giggles Will Ensue
Reviewed in the United States on January 6, 2020
Verified Purchase
This book is too cute!

It makes you laugh and you learn a few things at the end of it as well.

Amazon Customer
5.0 out of 5 stars Fun book series!
Reviewed in the United States on December 18, 2020
Verified Purchase
Bought this to add to her book collection for Christmasshe will love it!
Read more
Helpful
Report abuse

kariem87
5.0 out of 5 stars Hardcover book
Reviewed in the United States on March 21, 2020
Verified Purchase
Great Hardcover book at a great price. My son loves these old lady books and he was thrilled.
Read more
Helpful
Report abuse

Elena2010
5.0 out of 5 stars Very awesome book!!
Reviewed in the United States on March 5, 2020
Verified Purchase
My son is into space and loved this book!!
Read more
Helpful
Report abuse
See all reviews

MISS SA
5.0 out of 5 stars Love these books
Reviewed in the United Kingdom on February 8, 2021
Verified Purchase
Fab books added to my collection. Use these books all of the time in my class.
Read more
Report abuse

Ms. Megan Miller
5.0 out of 5 stars When It comes to “Teaching Children” it is important to follow their Lead.
Reviewed in Canada on May 26, 2019
Verified Purchase
First I brought them home into work so i could show the kids the different kind of bugs their are, Which i was surprised that sone of them knew their names!!
Read more
Report abuse
See all reviews