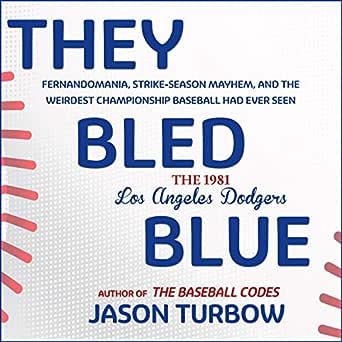 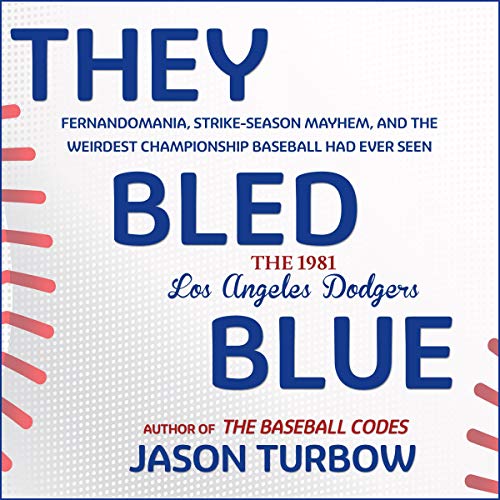 They Bled Blue: Fernandomania, Strike-Season Mayhem, and the Weirdest Championship Baseball Had Ever Seen: The 1981 Los Angeles Dodgers

4.8 out of 5 stars
4.8 out of 5
78 global ratings
How are ratings calculated?
To calculate the overall star rating and percentage breakdown by star, we don’t use a simple average. Instead, our system considers things like how recent a review is and if the reviewer bought the item on Amazon. It also analyzes reviews to verify trustworthiness.

honest AbeTop Contributor: Baseball
5.0 out of 5 stars Very enjoyable retrosepective
Reviewed in the United States on April 30, 2020
Verified Purchase
So, this is the second Jason Turnbow book I have read. The other about the bombastic A's was a five star book to me. This book is still very enjoyable and easy to read. Turnbow covers the personalities of the 81 club in sufficient detail so the reader comes away with a good feel for the players, especially the infield that played together longer than any in history. Turnbow was successful in spending hours of in person interviews with Jerry Ruess, Steve Garvey, Reggie Smith, Ron Cey, and Davy Lopes, and Lasorda.He does a nice job with the causes of and strategies that led to the 81 strike , but not in such overwhelming detail(As did Jeff Katz in his Split Season) so as to distract from the Dodger Blue team of 81. One consequence of the split season was that the Dodgers, having won the first half, could coast during the second half and preserve their picthing because they were assured of a spot in the playoffs.I thoroughly enjoyed the Tommy Lasorda background and the short history of the team in the late 70's to their last chance for a world title 1981 team. I laughed out loud at the time Jonathan Winters, as Lasorda's guest, put on a comedy routine in the club house that ran so long that the team wasn't on the field until after the national anthem.Some of the stories are very amusing, plenty revolving around Jerry Reuss(I won't ruin it for you but it concerns what Reuss did at a restaurant to loosen up the frayed nerves of the team down to their last loss against the Expos), Jay Johnstone's pranks, the almost brawl between Reggie smith and Pascal Perez and their teammates, and the time Reggie climbed into the stands to blast a heckling fan. What I found interesting was how similar the Dodgers were to the A's of the early 70's. The A's of course were knwn as a team that fought each other internally but who jelled because of their hatred of Charlie Finley. In many ways the Dodgers, especially the infielders disliked one another a great deal, but were able to win not only because each player contributed their best(Not one Hall of Famer on the team) in no small measure because of the driving personality of Tommy Lasorda and his "bleed Dodger blue" act that worked for quite a long time. This is a refreshing look back at the end of an era and the men that made it finally to a title.
Read more
One person found this helpful
Helpful
Comment Report abuse

James Montemurro
5.0 out of 5 stars A GREAT BASEBALL BOOK
Reviewed in the United States on August 20, 2019
Verified Purchase
Jason Turbow gives not just Dodger fans but all true baseball fans the story of the team's post 1960's evolution from mediocrity to success starting with the great 1968 draft to the 1970's winning tradition. The book is amazingly researched to tell the truth of what really occurred prior, during and after that amazing 1981 season. Thank God the baseball literary world has Jason Turbow to fill our days with meaningful reading about the game we love.
Read more
Helpful
Comment Report abuse

Amazon Customer
4.0 out of 5 stars Book for mature Dodger fans.
Reviewed in the United States on November 9, 2019
Verified Purchase
Good book for long time Dodger fans. Younger fans may find boring. Had to have lived it and known the characters.
Read more
Helpful
Comment Report abuse

Amazon Customer
4.0 out of 5 stars Great read
Reviewed in the United States on July 22, 2020
Verified Purchase
Jason Turbow always writes entertaining books. A great look at the Dodgers in the strike shortened 1981 season. Full of great insights from many of those who were there. You don’t have to be a Dodger fan or even a baseball fan to enjoy this read.
Read more
Helpful
Comment Report abuse

Moss Klein
5.0 out of 5 stars Another homerun!
Reviewed in the United States on October 19, 2020
Verified Purchase
A fascinating book. I learned a lot from the entertaining insightful anecdotes. Extremely well written as are all of his books.
Read more
Helpful
Comment Report abuse

JeffE93
5.0 out of 5 stars Great details that bring back a thousand memories
Reviewed in the United States on December 8, 2019
Verified Purchase
This book is wonderful.for Dodger fans, Amgelinos and baseball fans in general. Each page brought back memories that I had long forgotten. Thank you, Jason Turbow
Read more
Helpful
Comment Report abuse

LSmithTop Contributor: Baseball
5.0 out of 5 stars Excellent book on a championship baseball team
Reviewed in the United States on June 9, 2019
1981 has been remembered as one of the strangest baseball seasons in the history of the game. The season was split in two due to a player’s strike and the division winners in each half made the postseason, even though that meant the two best overall teams in the National League missed the playoffs. A rookie pitcher who had a body that was closer to resembling a keg than a six pack took baseball by storm. Four infielders who had played together for nearly eight years were on their last quest together. The link for the last two points was the Los Angeles Dodgers, who ended up as the champions in three exciting postseason series. Their quest to the championship is documented in this breezy, fun-to-read book by Jason Turbow.

While the book reports on the 1981 Dodgers season in chronological order, it is not the typical “this happened, then that happened” type of season recap. It actually starts in 1978 when the New York Yankees defeated the Dodgers in that year’s World Series, winning the last four games after Los Angeles won the first two. That plays as motivation for many of the players who were on that team, including the four infielders who had been on the team and playing nearly every game since 1973. Along the way the reader will learn a lot about all four of them – first baseman Steve Garvey, second baseman Davey Lopes, shortstop Bill Russell and third baseman Ron Cey.

However, the best personal story in the book was also the best baseball story of that year. Turbow does an excellent job of bringing the reader into the world of Fernando Valenzuela, a 20 year old rookie pitcher with a portly body, a lack of ability to speak English and a devastating screwball. He won his first eight decisions with an ERA under one and took the baseball world by storm. Being of Mexican heritage, he became a hero to the Mexican population in Los Angeles, which makes up a significant portion of the city’s residents. How he handled this fame, especially when he was a guest of President Ronald Reagan at the White House, was the best reading in the book, along with stories about manager Tommy Lasorda.

The book was capped off by providing an excellent account of the Dodgers’ postseason run. In the Division Series (only made possible by the split season) they fell behind the Houston Astros two games to none in the best of five series, only to win three straight to capture the series. Then, in another best of five series, they defeated the Montreal Expos in thrilling fashion with Rick Monday hitting a homer to win the game for Los Angeles in the ninth inning of game five. Then the Dodgers made the three year wait to face the Yankees again worth it, defeating them in six games in the same manner as New York won in 1978 – lost the first two games, won the next four. The description of the games, the players’ emotions and the joy of the entire city was well written.

Dodger fans will want to add this book to their collection as it is very likely the best source of information on that crazy championship season for them. Baseball fans and historians who are interested in that team should pick it up as well.

I wish to thank Houghton Mifflin Harcourt for providing a copy of the book via NetGalley in exchange for an honest review.