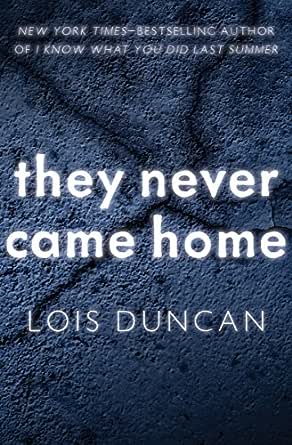 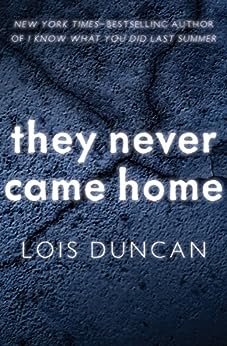 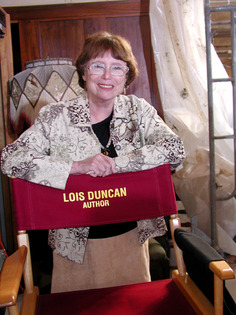 “They Never Came Home is a well-paced action story, with a full quota of heroes and villains, and a series of narrative hooks guaranteed to hold any reader.” —The New York Times Books Review
“Duncan writes page turners.” —Booklist

Lois Duncan (1934–2016) was an author of more than fifty books for young adults. Her stories of mystery and suspense have won dozens of awards and many have been named Best Books for Young Adults by the American Library Association. Among the many honors and accolades she has received for her work, in 2015, Lois Duncan was named a Grand Master by the Mystery Writers of America.  Duncan was born Lois Duncan Steinmetz in Philadelphia, Pennsylvania; she grew up in Sarasota, Florida. By age ten she was submitting her work to magazines, and she had her first story published nationally when she was just thirteen. In 1994, Duncan released a nonfiction title, Who Killed My Daughter?, after her youngest child was killed in a crime that was never solved.

Now he glanced up and saw Peggy crossing the room toward him. She had changed from her uniform into a skirt and sweater. With her hair fixed that new way, curling forward over her forehead, she might have been a high school girl rather than a working waitress and a college student.

"That's okay. I've been stuffing myself on pie. What do you want to do tonight?" He got to his feet and picked up the bill for the pie and coffee. "We might be able to catch the last feature at the Palm. I think they've got that new comedy playing."

At the cashier's desk she fastened the top button of her sweater while Dave counted out his change. Before them, the college boys from the far table were paying their own bill. Their dates stood apart, over by the door, chatting together. Suddenly the small, pretty one said, "Dan?"

Automatically, Dave raised his head and swung it in her direction. She was staring at him, as she had been earlier from the other table, but now her face was dead white. She looked as though she had just seen a ghost.

"You are Dan! You're Dan Cotwell!"

"I'm sorry," Dave said, "you must have me mixed up with somebody else."

"I don't! I couldn't!" The dark eyes were huge in the small face. "You are Dan, you must be! Nobody could look so much like Dan! Even your voice--the way you walk!"

"I'm sorry," Dave said again. "You're mistaken." He laid the money for the bill on the counter and took Peggy's arm. "Come on," he said hoarsely, "let's get out of here."

They stepped through the door out onto the sidewalk, and the fresh salt breeze swept into their faces. Behind them, the girl and her escort were also emerging from the restaurant, but he did not turn to look back at them. He could feel the girl's eyes on his back; he knew she was still staring. He could see in his mind's eye the shock on her face, could hear again the sound of her voice: "Dan!"

She had called him "Dan." He had turned, hearing the name! He had reacted to the name, almost as though it were his own!

What's wrong with me, he asked himself wildly. Am I nuts or something? My name is David, David Carter!

He thought, I need a doctor! I've got to see a doctor! No matter what Lance says, something is wrong with me, something more than just a jolt to my mind! I can't go on like this any longer! What if I'm actually crazy! What if all these dark churning things within me should come surging out one day, all these things I don't even know are there, and I turn into a raving maniac or something! What if I hurt somebody!

"Dave!" Peggy's voice was thin and frantic. "Dave, wait, please! I can't keep up with you!"

"I'm sorry." He had forgotten for the moment that she was beside him. He slowed his pace, and realized that his hand was clamped upon her arm. Abruptly he released it.

"I don't want to see a movie," Peggy said shakily. "I want to talk, Dave! I want to know what's wrong! There's something terribly wrong or you wouldn't be acting like this!"

"No. That is, there's nothing you can do about it."

"That girl back there, she spoke to you! I didn't hear what she said, but you knew her!"

"No. No, I didn't know her," Dave said violently. "I've never seen her before in my life."

"Then why did you grab my arm and start to run like that? Why are you shaking? People don't act like that if there's nothing the matter!"

He was shaking, and his heart was pounding against his chest. Before him, the girl's face was a dark blur, raised to his own. Impulsively, he bent his head and brought his mouth down hard upon hers. It was not a gentle kiss; it was desperate and frightened, a crying out through the darkness for something, someone.

When he raised his head, there was a sob in his throat.

"Joan," he said chokingly, "I don't know what to do! I don't know who to turn to! Joan, I'm scared! I'm starting to remember things, but they're the wrong things! They don't fit! Nothing fits!"

The girl in his arms was silent a moment.

Then she said, "There's one thing you're certainly not remembering. I'm Peggy. Peggy Richards. Not Joan.'' --This text refers to the mass_market edition.

They couldn't have just disappeared! Or could they?

That's the way it looks when Dan and Larry don't return from a weekend camping trip in the mountains. Then Joan, Larry's sister, gets a mysterious call from a man who says Larry owes him a lot of money. Where could her brother be?

Can Joan, with the help of dan's brother Frank, find Dan and Larry? Or are the two destined never to returm? --This text refers to the mass_market edition.

Joan's boyfriend and her brother are missing and assumed dead. Until the voice on the other end of the phone hints at something more terrible. --This text refers to the mass_market edition.

Joan's boyfriend and her brother are missing and assumed dead. Until the voice on the other end of the phone hints at something more terrible. --This text refers to an out of print or unavailable edition of this title.
Read more

3.8 out of 5 stars
3.8 out of 5
30 global ratings
How are ratings calculated?
To calculate the overall star rating and percentage breakdown by star, we don’t use a simple average. Instead, our system considers things like how recent a review is and if the reviewer bought the item on Amazon. It also analyzes reviews to verify trustworthiness.
Top reviews

Kindle Customer
3.0 out of 5 stars Great title
Reviewed in the United States on December 2, 2013
Verified Purchase
Another guilty pleasure for this"old adult." What is a suspense novel without a psychopath? They all look so innocent on the outside.
Read more
Helpful
Comment Report abuse

Amazon Customer
5.0 out of 5 stars Highly recommended!!!
Reviewed in the United States on April 19, 2017
Verified Purchase
If you love suspense you need to read Lois Duncan!!!! I read this one and am now a fan!! Will continue reading her other books!
Read more
Helpful
Comment Report abuse

Amazon Customer
5.0 out of 5 stars Thank you,
Reviewed in the United States on March 8, 2017
Verified Purchase
Once again, loved these when I was younger!
Read more
Helpful
Comment Report abuse

five
1.0 out of 5 stars One Star
Reviewed in the United States on June 13, 2016
Verified Purchase
it looked like a child's book when I received it.
Read more
One person found this helpful
Helpful
Comment Report abuse

Anne O. Nimus
3.0 out of 5 stars Poor editing
Reviewed in the United States on December 13, 2017
This story works as a young adult novel written in the late 1960s -- as it originally was. What doesn't work is the poor attempts to update the story. Throwing in a few references to cell phones and the internet doesn't work when you leave the family sitting around the landline phone, waiting for news, or the 1960s attitudes about women. Either go full Nancy Drew and rewrite the whole thing or leave it alone. I think it should have been left alone.
Read more
3 people found this helpful
Helpful
Comment Report abuse

brennie
2.0 out of 5 stars Not the author's best
Reviewed in the United States on October 31, 2019
I normally love Lois Duncan's books but this one, not so much. Slow moving and didn't really care for the characters. If you're going to read this author, I recommend 'Summer of Fear' or 'Down a Dark Hall.' They were much better.
Read more
Helpful
Comment Report abuse
See all reviews

Celiine Hayes
1.0 out of 5 stars One Star
Reviewed in Canada on February 22, 2016
Verified Purchase
Worst book I read in 2015.
Read more
Report abuse
See all reviews