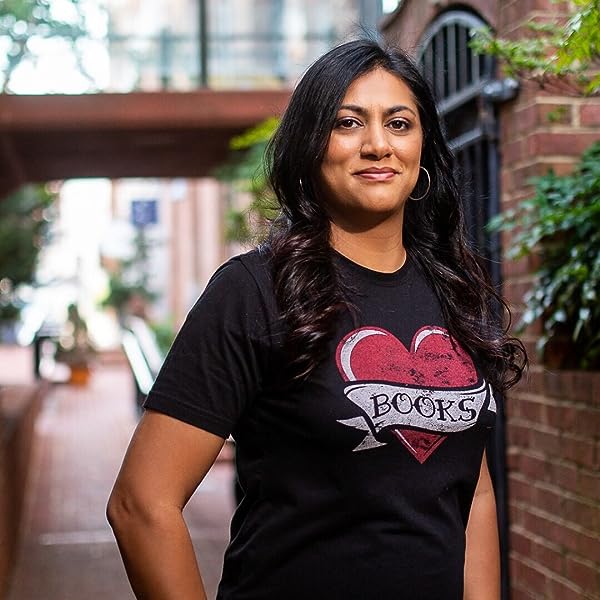 A Thief Among the Trees: An Ember in the Ashes Graphic Novel Hardcover – Illustrated, July 14, 2020

by Sabaa Tahir (Author), Nicole Andelfinger (Author), Sonia Liao (Illustrator) & 0 more
4.6 out of 5 stars 155 ratings
See all formats and editions
Sorry, there was a problem loading this page. Try again.

Taking place years before the bestselling An Ember in the Ashes novel series, this standalone original graphic novel follows three young military recruits: Elias, Helene, and Tavi, during their brutal training as soldiers for the Martial Empire.

WITHIN THE EMPIRE THERE ARE NO QUESTIONS, ONLY ORDERS.

Elias, Helene and Tavi are Fivers --in training to become elite military recruits for the Martial Empire at Blackcliff Academy. When they’re sent on a dangerous mission to steal a heavily-guarded poison on Isle South, they soon find themselves up against surprising enemies -- including other recruits. As the true horror of their assignment is revealed, these three will begin to confront the harrowing realities of Martial rule, their place in the system . . . and the choices they must make to survive.

New York Times bestselling author Sabaa Tahir joins writer Nicole Andelfinger and artist Sonia Liao for an all-new original graphic novel revealing an early tale of Elias and Helene at Blackcliff, and a stirring standalone chapter in the An Ember in the Ashes mythology.
Read more
Previous page
Next page

#1 New York Times bestselling author of the An Ember in the Ashes series, which has been translated into over thirty-five languages. She grew up in California’s Mojave Desert at her family’s eighteen-room motel. There, she spent her time devouring fantasy novels, raiding her brother’s comic book stash, and playing guitar badly. She began writing An Ember in the Ashes while working nights as a newspaper editor. She likes thunderous indie rock, garish socks, and all things nerd.

Sabaa Tahir is a former newspaper editor who grew up in California's Mojave Desert at her family's eighteen-room motel. There, she spent her time devouring fantasy novels, listening to thunderous indie rock, and playing guitar and piano badly. Her #1 New York Times bestselling An Ember in the Ashes series has been translated into more than thirty-five languages, and the first book in the series was named one of TIME's 100 Best Young Adult Books of All Time. Tahir's most recent novel, All My Rage, won the National Book Award for Young People's Literature, was an instant New York Times bestseller, received eight starred reviews and won the 2022 Boston Globe-Horn Book Award for Fiction and Poetry. Visit Sabaa online at SabaaTahir.com and follow her on Instagram or Twitter @SabaaTahir and TikTok @SabaaTahirAuthor.

Jessica S.
VINE VOICE
4.0 out of 5 stars An Insightful Prequel
Reviewed in the United States 🇺🇸 on December 31, 2020
Verified Purchase
A Thief Among the Trees is the combined work of Sabaa Tahir, Nicole Andelfinger, and Sonia Liao to bring us a totally kickbutt amazing graphic novel set in the world of An Ember in the Ashes! It tells a story of young Elias and Helene with their friend Tavi as they are in training to become military recruits for the Martial Empire. Though we lack Laia, this was still an amazing story with gorgeous illustrations that gave us insight to Elias character.

Granted, I haven't been in this world for a few years, and still need to read the final book. SHOCK! I know! Lol. But since I'm doing a New Year's Eve readathon of all my short little reads and graphic novels I decided to add this one to the mix! We're halfway through the last day of this year now.

Elias, Helene, and Tavi are sent to an island where a dangerous group is creating a danger substance that they are required to retrieve or they will suffer the consequences. Having to best their fellow classmates and get around the highly dangerous criminals should be challenge enough, but when Elias sees what is being done to the Scholars, he's coming to realize that he might be fighting for the wrong cause.

I would say diving back into this world was seamlessly easy, but it wasn't really. Not for me at least. Especially since I didn't read any previous notes for the series, since you know, this is a prequel. It was just a little hard to remember certain terms and the rules of the world. What laws and such are established and why this and that are dangerous or foolhardy tasks. It didn't detract my enjoyment of the story at large though.

Sonia Liao's illustrations are positively gorgeous. The details to the characters and their harsh environment really set the scene.

The story itself was pretty moving. A young Helene already has ambition in her eyes, Elias and Tavi are more seeing certain things for the first time and it changes their whole outlook. It was a pretty powerful little read. And if Goodreads is to be believed, there are TWO more in the works! I might have missed the announcement if Sabaa made it earlier this year, but I am totally excited for it! Makes me wonder if Laia could make a sudden appearance!

All in all, A Thief Among the Trees was a glorious insight to the character of Elias, and even Helene as well. They're young youthful adolescents who are only slowly seeing the world around them, and already we can see their character growth form into the people we first met in An Ember in the Ashes. Truly a remarkable and fun read for fans of the series already and a good starting point for new readers should they want to take the dive!

Dario
5.0 out of 5 stars Amazing!
Reviewed in the United States 🇺🇸 on October 15, 2021
Verified Purchase
The prequel I didn’t know I needed. Such heart and for sure sheds some light on what influenced Elias to do what he does.
Read more
Helpful
Report abuse

Amazon Customer
5.0 out of 5 stars I need more!
Reviewed in the United States 🇺🇸 on August 21, 2020
Verified Purchase
I loved this little insight into Elias and Helene's time as fivers. It was interesting to see one of their missions. I hope Sabaa continues to do more of these graphic novels! Hopefully longer ones because I always want more. The illustrations were beautiful and really brought the characters to life even more.
I would not recommend reading this before you read the Ember in the Ashes series (or at least the first book), as this doesn't give you any introduction to the characters or the situation.
Read more
2 people found this helpful
Helpful
Report abuse

Allison Hietala
5.0 out of 5 stars Read Through within 2 hours
Reviewed in the United States 🇺🇸 on October 9, 2020
Verified Purchase
I love Sabaa Tahir’s “An Ember In The Ashes” series. This prequel helped me understand before book 1 of her regular novel in the “An Ember In The Ashes” series more than I did before. Read this within 2 hours and wanted more of Sabaa Tahir’s books.
Read more
Helpful
Report abuse

SM Gondal
5.0 out of 5 stars Loved it!
Reviewed in the United States 🇺🇸 on January 21, 2021
Verified Purchase
Loved the animation and also love this series!
Read more
Helpful
Report abuse

naomi
5.0 out of 5 stars love this series
Reviewed in the United States 🇺🇸 on September 15, 2020
Verified Purchase
Baby Helene and Elias before they were grown trained killers!
Read more
Helpful
Report abuse

busy mom
1.0 out of 5 stars Its a COMIC BOOK
Reviewed in the United States 🇺🇸 on March 12, 2021
Verified Purchase
Seriously? Why, in all the reviews I read did no one think to mention A Thief Among the Trees was a COMIC BOOK!?? I was SO looking forward to reading a "pre-quel" about the main characters when they were younger. So very very disappointed! Didn't even waste my time trying to read a comic book on my kindle :(
Read more
One person found this helpful
Helpful
Report abuse

Scott G
1.0 out of 5 stars Don't bother. Stick to the novels.
Reviewed in the United States 🇺🇸 on September 10, 2020
Verified Purchase
This struck both me and my adult daughter as an afterthought thrown together mostly by the co-creators. It has some continuity issues, as well as really mediocre artwork. We both love the books (eagerly looking forward to the next one); but, we returned this. Bleah.
Read more
One person found this helpful
Helpful
Report abuse
See all reviews