Thin Girls: A Novel and millions of other books are available for Amazon Kindle. Learn more 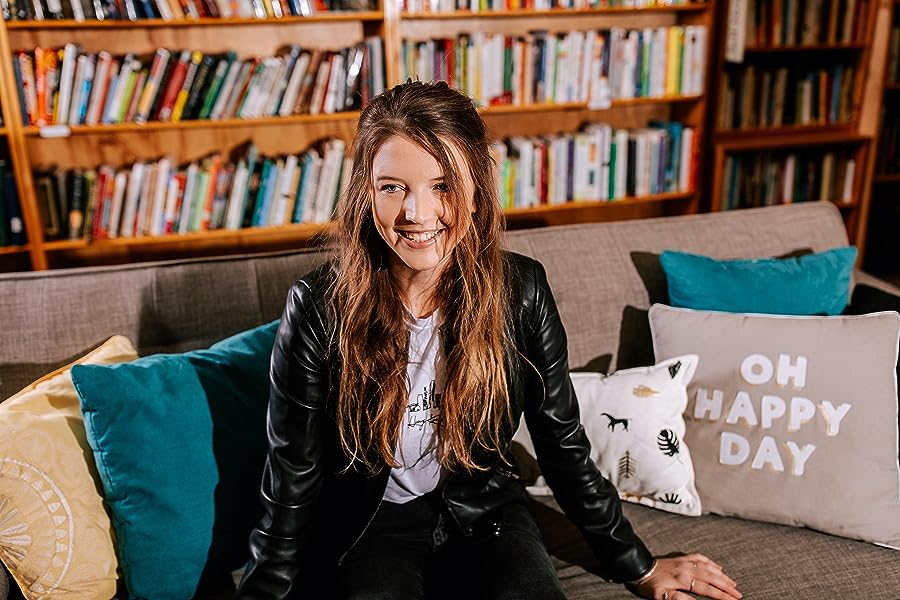 by Diana Clarke (Author)
4.0 out of 5 stars 154 ratings
See all formats and editions
Sorry, there was a problem loading this page. Try again.
Read more Read less
Previous page
Next page

“Dark, poignant and gripping, Diana Clarke’s Thin Girls is sure to be unlike anything else you’ve read. . . . Thin Girls is a captivating story of the Winters twins’ road to recovery as they work to help each other through issues of body image, love, identity and sexuality. . . . Clarke has fashioned a world that feels almost dystopian, yet its power lies in the fact that Rose and Lily’s experiences are all too common and all too real.”
-- Associated Press

“Thin Girls is a sharp, cutting debut, ostensibly about the traps of anorexia and body dysmorphia. But its true concern is with the trappings of being a woman. Full of dry dark wit, the world Clarke has created would almost feel absurdist if it weren’t so dangerously real. This book made me feel so much: fear, dread, the flush of young love, the joy in small things, hope. Thin Girls holds it all between its covers.”
-- Diane Cook, author of Man V. Nature and The New Wilderness

"The story [protagonist Rose] tells is as gripping as a thriller, but it’s Clarke’s language that truly makes this novel special. She writes with a lyricism that not only encompasses the grotesque and the transcendent, but also sometimes co-mingles the two. When Rose finds a collection of short fiction Lily has written, these harrowing little fables bring the latent otherworldliness of the novel as a whole to the surface. . . . Incisive social commentary rendered in artful, original, and powerfully affecting prose." -- Kirkus Reviews (starred review)

“Diana Clark has written a lightning bolt of a book, one that electrifies with its powerful insights into women, their relationship with their bodies and with each other. I was instantly drawn into Clark’s dark vision of sisterhood, and emerged changed.” -- Danielle Trussoni, bestselling author of Angelology and The Ancestor

“In Clarke’s raw debut . . . the sisters’ bond is strongly palpable. . . . This page-turner makes for an illuminating, ultimately hopeful look at the constant struggle women face regarding their body image.” -- Publishers Weekly

“Diana Clarke has written an edgy, deeply moving and original book. Her writing is beautifully poetic and tinged with dark wit, and she moves us elegantly between the past and present lives of two complex and fascinating sisters. This is a queer story, a female story and a story about identity shaped around pain, and yet it has the fearless depth of a story about all of us.” -- Lexi Freiman, author of Inappropriation

“This debut novel is a breathtaking and sobering account of eating disorder treatment and mortality.” -- Booklist

“A stunning debut novel…gorgeously crafted…From one sentence to the next, Clarke leaves her readers splayed open, throbbing with the most beautiful, necessary ache. She writes with unyielding honesty and breathtaking tenderness. Thin Girls is a brutal, and unrelenting examination of what it means to be a woman in a body, wanting, needing, wanting, needing so much. With her assured, elegant prose Clarke makes you hope against all hopes that both Rose and Lily can find a way to satiate and save themselves and each other.” -- Roxane Gay

Purdue MFA (with Roxane Gay as her thesis adviser) and University of Utah PhD candidate, Diana Clarke is a New Zealander who now lives in Salt Lake City. Her work has been published in Glimmer Train, The Rumpus, Black Warrior Review, The Master’s Review, and Hobart, among other places. THIN GIRLS was her first novel. THE HOP is her second novel.

Start reading Thin Girls: A Novel on your Kindle in under a minute.

4.0 out of 5 stars
4 out of 5
154 global ratings
How are ratings calculated?
To calculate the overall star rating and percentage breakdown by star, we don’t use a simple average. Instead, our system considers things like how recent a review is and if the reviewer bought the item on Amazon. It also analyzes reviews to verify trustworthiness.

Nenia Campbell
TOP 500 REVIEWERVINE VOICE
4.0 out of 5 stars A tough read but beautiful and compelling
Reviewed in the United States on April 18, 2021
Verified Purchase
I bought THIN GIRLS a while ago but didn't read it until now because I wasn't really in the right "space" for something so dark and heavy. It's a really weighty story that delves into a number of really difficult subjects, everything from coming out, to eating disorders, to toxic family dynamics, to abusive relationships, to bullying. There's almost a fairytale-like quality to the writing, which is floaty and kind of dreamy. I don't think it's a style that is going to appeal to everyone but it worked for me and kind of reminded me of an adult-geared version of Laurie Halse Anderson's book, WINTERGIRLS.

Lily and Rose are twins-- identical twins, alike in every way, until one of them stops eating and one of them can't get enough. It's told in past and present. In the present, Lily is overweight and entering into an unhealthy relationship with a married man and Rose is in a rehab center trying to reestablish a healthy relationship with food. In the past, we follow the twins through high school, and see Lily's fall from grace as a popular girl and Rose struggling to suppress her emerging sexuality as she finds herself attracted to the Queen Bee, Jemima.

The "past" sections were much better than the present sections, in my opinion. There's a subplot with an influencer's weight loss products that ends up kind of being a distraction, adding too much to the plot, which already has so much to work with and focus on. The present sections are about girls in a household that, while not abusive, still has toxic dynamics and enabling behaviors that end up fostering some really maladaptive coping habits that Lily and Rose develop in an attempt to get some control over their lives. The past portions are also going to be the most triggering for people because the author lists out their weight at the beginning of each of these sections, with hard numbers, and it's my understanding that this can be particularly hard to see and read if you've struggled with an ED.

Overall, I liked this book a lot and thought the author handled her subject with respect as she told the story she had to tell. It was beautiful and disturbing, and even though it had its flaws, I would still recommend it to anyone who is a fan of literary fiction that focuses on women's problems, in the vein of of WHITE OLEANDER and the many attempts to copy it that followed in the late-2000s.

K.
5.0 out of 5 stars This book is magnificent.
Reviewed in the United States on August 3, 2020
Verified Purchase
Heart-wrenching, delicate, smart, and exquisitely beautiful. Masterfully written.

Let this author take you on a grand tour of the lives of twin sisters Lily and Rose.

So many twists, turns, reveals, and moments of awe. It's more than 300 pages, but I finished in 3 days. When I wasn't reading, I found myself longing to return to the book.

I wish I'd been able to read this in my early twenties, when a friend was struggling with an eating disorder. I had my own body image issues and wasn't able to realize then that her comments about my food choices had nothing to do with me. This book helped illuminate that situation, all these years later.

Kindle Customer
5.0 out of 5 stars Powerful
Reviewed in the United States on July 13, 2021
Verified Purchase
Powerful is the way I describe this book. The author does a fine job, creating the steps a girl who is unsure of herself, goes through, ending in a deadly anorexia. It's more than just a girl on a diet. Anorexia becomes an addiction, an obsession. Too many girls in the world have eating disorders because there is so much emphasis placed on body image. I certainly hope that all girls who are at war with themselves and are unhappy with themselves, will read this book. It needed to be written.
Read more
Helpful
Report abuse

Kirsta
4.0 out of 5 stars A compelling and heavy read
Reviewed in the United States on September 27, 2020
Verified Purchase
I read this book for a book club and I was definitely hooked in the first chapter. The main character’s struggle was palpable. The author does a good job describing what it might be like to live inside the mind of a person with an eating disorder. The struggles between her and her sister are very relatable. This book tackles many heavy topics but does so with grace,
Read more
One person found this helpful
Helpful
Report abuse

Brady
5.0 out of 5 stars Beautiful
Reviewed in the United States on July 14, 2021
Verified Purchase
I bought this after Roxane Gay posted it on her Instagram story. This is an insanely well crafted look into eating disorders and how they present in young women (esp queer young women). I love that it also addressed the influence the media has on our perceptions of what is beautiful. 100/10 read.
Read more
Helpful
Report abuse

Kindle Customer
5.0 out of 5 stars Amazing!
Reviewed in the United States on September 5, 2020
Verified Purchase
Clarke did an amazing job with addressing taboo subjects without "ruffaling any feathers"; a sophisticated way. The romance is not at the center of the novel, rather finding self-love is. Thin Girls is a great first novel debut!
Read more
Helpful
Report abuse

Reece
5.0 out of 5 stars So far so good
Reviewed in the United States on January 14, 2021
Verified Purchase
Not even close to being finished, but so far so good.
Read more
Helpful
Report abuse

RubyAnn
4.0 out of 5 stars Unexpected read!
Reviewed in the United States on July 17, 2020
Verified Purchase
It certainly wasn’t my cup of tea, but it was so well written, that it was a must-read! Don’t be afraid to read this adventure!
Read more
Helpful
Report abuse
See all reviews
Back to top
Get to Know Us
Make Money with Us
Amazon Payment Products
Let Us Help You
EnglishChoose a language for shopping. United StatesChoose a country/region for shopping.
© 1996-2021, Amazon.com, Inc. or its affiliates