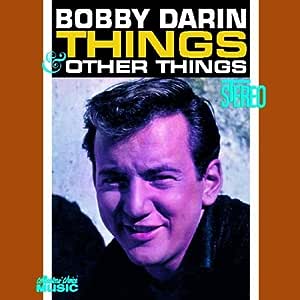 Atco had a hit with Bobbys country-ish 'Things' in the summer of 62, but he had already left the label, so they had no album to go with it! So, like on 'Twist with Bobby Darin', they put together a collection of odds n ends from the vaults, and, like on 'Twist', they ended up with a fine album despite themselves! Which, of course, is just a testament to Bobbys greatness; in fact, this album may be the single most definitive demonstration of his amazing versatility, boasting country, folk, jazz, pop, rock and even tropical stylings with all but two songs written by the man himself. Includes 'Things; Ill Be There; Lost Love; Look for My True Love; Beachcomber; Now Were One; Oo-Ee-Train; Jailer Bring Me Water; Nature Boy; Theme from "Come September,"' and 'Sorrow Tomorrow'.

Jay Boco
4.0 out of 5 stars decent Darin
Reviewed in the United States on March 5, 2015
Verified Purchase
This turned out to be better than I expected. I bought it only for "Jailer, Bring Me Water." I had heard the song on "Johnny Rivers Rocks the Folk" but it didn't play without heavy skips & scratches so I decided to get the original. I didn't find it on any other single disc.
Although not billed as such, this disc turns out to be a compilation of songs released as singles, some A some B sides, except for "You're Mine". This album was released at the end of his recording career with Atco so they were giving the public what they had on the shelves.
As it goes, I doubt that I heard most of them before for if not for being a B side then because they may not have charted. That excludes "Things" (a personal Darin favorite of mine) and "Now We're One". But on that one, it was Buddy Holly's version I had on 45 from when it was released.
A couple of the tunes reflect the show business direction Darin went for a while and Jailer is a very good tune.

Cody Reschke
5.0 out of 5 stars Good album Bobby Darin!
Reviewed in the United States on May 3, 2015
Verified Purchase
I really liked this album, the songs on this are good, I like Things, I'll Be There, Nature Boy. The rest of this album is good too. I also like Theme From 'Come September' is just music is good too.
Read more
Helpful
Comment Report abuse

Joe Rustenhaven
4.0 out of 5 stars WHAT A GAMERER
Reviewed in the United States on February 21, 2015
Verified Purchase
EARLY STUFF BOBBY WAS ALAWAYS TRYING EVERYTHING
Read more
Helpful
Comment Report abuse

Evelyn Bryant
5.0 out of 5 stars Five Stars
Reviewed in the United States on December 26, 2015
Verified Purchase
Just what my husband wanted and had in a couple of days
Read more
Helpful
Comment Report abuse

Leganto
5.0 out of 5 stars At last we can hear these again
Reviewed in the United States on November 25, 2004
For the past several years, I have been trying to get Bobby Darin's lesser-known hits on CD. Now they are here! I'll Be There, Nature Boy, Look for My True Love, Theme from "Come September", etc. Some of these were flip sides on the original 45s, and hardly known. But I would say that I appreciate having at least 7 of the songs on this collection. To my knowledge, the only one that is available elsewhere is the title song Things.

People who were teenagers or young adults in the early 1960s should definitely be pleased with the chance to hear these songs again, and to add them to their own collection in current media format.

By the way, there is one track left out in Amazon's song list: You're Mine.
Read more
8 people found this helpful
Helpful
Comment Report abuse

Ron Cameron
5.0 out of 5 stars bobby d
Reviewed in the United States on March 4, 2010
Great songs...great CD....there was nobody like Bobby....Disapointed that album "18 yellow roses" not available...only in LP, not CD
Read more
One person found this helpful
Helpful
Comment Report abuse

Judith A. Mcrae
5.0 out of 5 stars Another Great Selection
Reviewed in the United States on September 15, 2007
A great selection of Bobby's own writing, and piano playing talent, a must for fans
Read more
One person found this helpful
Helpful
Comment Report abuse
See all reviews

Angel Delta
4.0 out of 5 stars The Diverse Talents Of Bobby Darin
Reviewed in the United Kingdom on January 5, 2014
Verified Purchase
As I noted in my review of  Bobby Darin Swings The Great American Songbook  Sinatra may have had the voice, Tony Bennett may have had the elegance and Mel Torme may have had the range, but for my money nobody could swing it quite like Bobby Darin. But Bobby could also sing a mean ballad, have great success in the teen oriented pop charts and crossover to the sound of country, folk and gospel. If this were not enough he was also a successful songwriter (he wrote all but two of the twelve tracks on this album), and he was an arranger and a pianist too.

It is thanks to Darin's diverse talents that this hotch potch of an album actually works at all. It is a collection of B sides, two instrumentals, two UK top 50 hits and previously unreleased material all recorded at various sessions between 1958 and 1961. The highlights are the #3 UK hit "Things" a jaunty up tempo number, the brooding, brass laden #24 UK hit "Nature Boy" that shows off Darin's impressive vocal range and the gospel folk of "Jailer Bring Me Water" - the B side of "Things".

Mid tempo ballads such as "I'll Be There", "Lost Love" and "You're Mine" are typical of Bobby's early pop period and full of an easygoing charm that characterised his universal appeal. There are two instrumentals, the lilting "Beachcomber", credited to Bobby Darin at the piano and which anticipated the sound of Ramsey Lewis and the latin inflected theme to the movie "Come September" in which Bobby starred. This was credited to Bobby Darin and his orchestra and both pieces were written and arranged by Darin.

Now released for the first time on CD this is a fascinating collection of some of Darin's lesser known work culled from his Atco catalogue and a one shot glimpse of just how eclectic and diverse his talents were.
Read more
3 people found this helpful
Report abuse

JB
5.0 out of 5 stars Enjoyed it
Reviewed in Canada on February 23, 2015
Verified Purchase
This was a gift for my husband as he loves Bobby Darin and especially the song "Things" If you like Bobby Darin, you will like this.
Read more
Report abuse