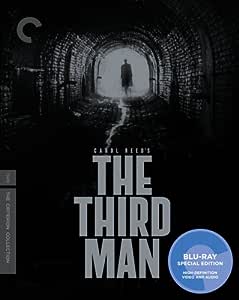 BLU-RAY SPECIAL EDITION FEATURES:
Restored high-definition digital transfer
Uncompressed mono soundtrack
Video introduction by writer-director Peter Bogdanovich
Two audio commentaries: one by filmmaker Steven Soderbergh and screenwriter Tony Gilroy, and one by by film scholar Dana Polan
Shadowing The Third Man (2005), a ninety-minute feature documentary on the making of the film
Abridged recording of Graham Greene s treatment, read by actor Richard Clarke
Graham Greene: The Hunted Man, an hour-long, 1968 episode of the BBC s Omnibus series, featuring a rare interview with the novelist
Who Was the Third Man? (2000), a thirty-minute Austrian documentary featuring interviews with cast and crew
The Third Man on the radio: the 1951 A Ticket to Tangiers episode of The Lives of Harry Lime series, written and performed by Orson Welles, and the 1951 Lux Radio Theatre adaptation of The Third Man
Illustrated production history with rare behind-the-scenes photos, original UK press book, and U.S. trailer
Actor Joseph Cotten s alternate opening voice-over narration for the U.S. version
Archival footage of postwar Vienna
A look at the untranslated foreign dialogue in the film
PLUS: A booklet featuring an essay by Luc Sante

Stills from The Third Man (Click for larger image)

Of all the movies I have seen, this one most completely embodies the romance of going to the movies. --Roger Ebert

The greatest British film ever made. --British Film Institute

4.5 out of 5 stars
4.5 out of 5
2,287 global ratings
How are ratings calculated?
To calculate the overall star rating and percentage breakdown by star, we don’t use a simple average. Instead, our system considers things like how recent a review is and if the reviewer bought the item on Amazon. It also analyzes reviews to verify trustworthiness.

Second, Reed's stunning conception to have the whole score done by a zither player, a middleaged musician named Alex Karas who'd struggled along for years and whom Reed happened to hear in Vienna. Apparently Reed would show Karas scenes and just say, in effect, "play stuff." In the process Karas created what became a popular standard, the "Third Man Theme," and got nicely rich. I think it's the most original "score" in the history of film, at least until Kubrick's 2001. Some people commenting on the film below were puzzled by it, and I can see why. It took me several viewings to figure out why this music is so apt. (Actually I know Vienna well.) On the surface the music is bubbly and gay, but it's a heavy, fraught gaiety. This music reminds me of an old Viennese saying: "The situation is desperate, but not serious." There's an old device in music called counterpoint, in which melodies are superimposed. Karas's zither music is the stunning counterpoint to a very dark story (though not without some subtle comedy). I don't know of anything else like it.

RDDTop Contributor: Batman
TOP 500 REVIEWER
5.0 out of 5 stars A Timeless Classic!
Reviewed in the United States on November 7, 2017
Verified Purchase
Carol Reed's "The Third Man," with a script by Graham Greene, is a noir thriller set in post-World War II Vienna, which was divided into four zones for each of the Allies at that time. Holly Martins (played by Joseph Cotten) arrives in the city based with a job offer from his friend Harry Lime, who just died the previous day. Martins believes the events surrounding the death suspicious and begins to investigate them, leading him to run afoul of the local military authorities and the criminal underworld.
The story itself is fairly standard for a mystery, but the Viennese setting and the harsh black-and-white's of cinematographer Robert Krasker coupled with Anton Karas's Zither score build an atmosphere all their own that completely draws the viewer into the story. The chase sequence through the elaborate sewers under the city and the scenes in and around the cemetery are perfect uses of blocking and framing to tell a story. Though this film debuted in 1949 and its twists and turns are available online, the film still succeeds in drawing in the audience and surprising them. If you haven't seen this, you must watch it!

Wayne KleinTop Contributor: Classic Rock
HALL OF FAMEVINE VOICE
4.0 out of 5 stars Great movie mediocre transfer-get the 2015 reissue (UK) which is region free.
Reviewed in the United States on November 28, 2020
Verified Purchase
A classic film with a lot of rumor around the production (for example the myth that Welles directed his own scenes; I don’t doubt he tried to direct his scenes but it’s all Reed) and an outstanding example of collaboration, “The Third Man” remains a pivotal film on the filmography of all participants.

Simon Callow’ s multi-part biography of Welles does a good job pf summarizing the production (and he provides an excellent commentary track with the late Bond director Guy Hamilton who worked on the film as an AD) as do the other special features on the 2010 release.

The 2010 Blu ray isn’t horrible but it IS inferior to what came before AND after. Criterion’s Blu-Ray featured a nicely nuanced restoration. This 2010 edition is sloppy by comparison; blacks aren’t solid, contrast is a problem at times and there’s a considerable amount of debris visible in some sequences. The other issue is the overuse of digital noise reduction often used to eliminate excessive grain (grain management). It’s overuse here indicated a problem that persisted during early mastering for high def. Audio is also considerably inferior with dialog occasionally lost in the presentation.

The 2015 reissue from Studio Canal (not issue in the U.S. from Lion’s Gate) is better and closer in all areas (and surpassing in some) the Criterion. The 2015 (which has a different cover and is ONLY available as a region free Blu-Ray) uses a still from the film as it’s primary cover and is in black & white. The 4K restoration blows away the 2010 Blu-ray. Likewise, audio sounds considerably better.

The special features are carried over from the 2010. If you are looking for an upgrade (and are unwilling to wait for a UHD 4K release) , the import 2015 IS the version to get besting the Criterion in some areas and blowing away the more murky presentation of the 2010.

Paul Morel
5.0 out of 5 stars Third Man..... who is he??
Reviewed in the United States on June 8, 2017
Verified Purchase
A great film. The morally dead post-war world is presented in post facets that are disturbing and electrifying. Orson Welles at his most dynamic, and Joseph Cotton in a role as a writer of westerns gets more and more eerie as the film proceeds. I cannot imagine a better cast, and if there are doubts about Alida Valli, put them out of your mind..a spell-binding portrayal of someone who cannot find any equivalent center of self in her life.

Glenn M. Wishon
5.0 out of 5 stars The Ferris wheel is still there.
Reviewed in the United States on January 13, 2019
Verified Purchase
We rented this movie just before leaving for Vienna. We rode the Ferris wheel and marveled at the restoration and vibrancy of the area compare to the devastation represented in the movie. Very Noir film with great performances by Orson Welles, Joseph Cotton and Trevor Howard. Spooky cinematography, and of course, that theme music!
Read more
15 people found this helpful
Helpful
Report abuse
See all reviews

spotty
5.0 out of 5 stars Don't miss this great cinema!
Reviewed in the United Kingdom on August 16, 2016
Verified Purchase
There are probably many, including myself, who have not had the pleasure of seeing this film before. I know that some of the younger generation eschew monochrome films and in so doing, deny themselves access to some of the greatest film made during the last century. The Graham Greene story is pretty lightweight but it's realisation makes it, for me, one of the great cinematic experiences of my picture-going life. I'm not a lover of Joseph Cotton, the leading man, but the leading lady is an actress of considerable talent and Orson Wells, in the title but fairly small role, gives a touch of star light to the film.

There are splendid touches - notably, for me, the parts played by a small boy and a tiny kitten but It is the photography and the lighting, and the wonderful scenery of post-war Vienna which define the film's - and the director's genius. (I don't know how they managed to shoot so many scenes in completely deserted streets!)

If you are young, take a chance and you will not regret it. If you are old, like me, you will delight in the visual and atmospheric quality of the experience: and it will be strangely familiar to anyone who lived through the last war and the aftermath of bombed-out streets and derelict architecture.

Debbie Young
5.0 out of 5 stars Everyone should watch this classic at least once
Reviewed in the United Kingdom on February 25, 2017
Verified Purchase
Bought this as part of my effort to broaden my teenage daughter's appreciation off film to timeless classics (she's long been a fan of Laurel and Hardy and the Marx brothers) and was very gratified that she watched the whole thing, rapt. Film quality was excellent and that wonderful zither soundtrack still sends shivers down the spine. Artistically so perfect, wrapped up with airpunchingly good ending. Love love love. Will watch again soon.
Read more
17 people found this helpful
Report abuse

Baskerville
4.0 out of 5 stars Two flaws
Reviewed in the United Kingdom on July 8, 2020
Verified Purchase
Why was this masterpiece so needlessly marred? One flaw is well-known - what is meant to be the same cat is all too obviously three. Even if the long shot was done on location in Vienna and the close-up back in a British studio, couldn't they have found a reasonable lookalike? Less famously, in the introductory sequence (with Reed's voice-over) on occupied Vienna a shot of military vehicles and personnel (presumably taken from a newsreel) has missing frames. It cannot be (as in Criterion's THE FALLEN IDOL) subsequent damage because the voice-over continues across it. Why was the shot chosen? Nowadays CGI could remedy both problems, though it's a question whether anyone would pay for it. (A small curiosity: originally, the voice-over returned when Welles shot Bernard Lee. That has gone.)
Read more
3 people found this helpful
Report abuse

TheMagicPumpkin
5.0 out of 5 stars Fantastic release from Studio Canal
Reviewed in the United Kingdom on April 9, 2017
Verified Purchase
Fantastic release from Studio Canal. The 4K transfer looks great and I didn't need to shell out $100+ to get the OOP Criterion Blu-ray. I'm from the USA and bought this from Amazon UK without issue (arrived in less than two weeks). Everything but a couple of the supplements played fine on my Region A player.

My only complaint is the cover art, which is pretty unimaginative and completely leaves poor Joseph Cotten out. For me he is the real heart of the picture, and it's too bad his buddy Orson always gets the credit.
Read more
12 people found this helpful
Report abuse

D. Warren Piper
5.0 out of 5 stars Greatest film?
Reviewed in the United Kingdom on March 9, 2020
Verified Purchase
Some have argued that this is the greatest film ever made. What is undeniable is the wonderful lighting of the city, the haunting melody on the zither and the shots of people's heads. The story is spellbinding. The final sequence of the girl walking past and ignoring the man who has shot her love lives on in the memory.
Read more
4 people found this helpful
Report abuse
See all reviews