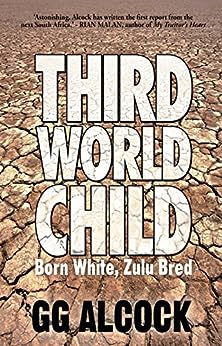 Stillwaters
5.0 out of 5 stars The best autobiography I've read in a long time
Reviewed in the United States on February 13, 2015
Verified Purchase
Gg Alcock has produced an unusual, convention defying autobiography that is quite difficult to categorise and accurately reflect without resorting to blunt, outmoded clichés but I’ll give it a shot. In order to get your mind around Alcock’s wonderfully out of the box life-story try to imagine the following: picture a boyish version of Roy, Rutger Hutger’s genetically engineered “superior” Nexus 6 android from “Bladerunner” walking around the set of the movie “Born Free”. Sit Roy down and have him watch repeated screenings of Francis Ford Coppla’s “Apocalypse Now”. Then drop Roy off in rural South Africa within faction ridden Masinga during the extremely violent 1980s and sit back and let an intriguing Only In South Africa social experiment unfold.

To up the ante let’s have Roy be raised by two ultra-committed Christian missionaries who are determined to live the sparse, humble life of their poverty-stricken black neighbours. Little Roy will grow up without sandals, wash in the local river alongside overfed muddy cows, get beaten up local Zulu bullies, flush out his bowels in the local field and learn to navigate the often dangerous byways of rural Southern African life on Mother Africa’s terms. Many exciting questions will surely arise from this grand experiment. Will Roy lose his white identity and sire dozens of unacknowledged, bi-racially confused children? When Roy eventually goes to the big, awe-inspiring metropolis that is modern Johannesburg, will he find himself exposed as an ill educated white-savage in cheap, ill-fitting clothing and run back to the comfort and safety of his small hut by the Masinga river?

The answer, and I suspect you didn’t see this coming, is that Roy didn’t grow up to be a blighted, psychologically tortured Frankenstein monster or a spiritually enlightened Dances With Wolves social revolutionary. Instead, by drawing on his unique background, he rose to the top of the highly competitive SA marketing tree and eventually lorded it over a host of city bred white and black South Africans who remain desperate to communicate with the rural multitudes Roy grew up with.

You might not be impressed by Roy’s journey from underfed barefoot waif to a world class marketing consultant, after all the Nexus 6 model is built to survive in harsh conditions and solve complex issues at quicker rate than we mere mortals. However GG Alcock, the living, breathing Roy we encounter within Third World Child, emerges from a series of highly original anecdotes as an all-too-fallible, all-too-human character, whose success and triumphs are therefore even more impressive.

Like all good blockbusters Alcock’s fast-paced, in-your-face tale is ably served by an outstanding cast of characters: racist ANC hating army officers, vindictive local police, opportunistic, murderous thieves, flawed childhood friends, larger-than-life township gangsters, and madcap visionary explorer-marketing gurus who could not be found anywhere but within South Africa. Despite the sharp, bad-boy glamour of this action-packed cast it’s Alcock’s parents, Neil and Creina, carefully sketched out by a loyal but never starry-eyed son, who sparkle with genuine charisma and an authentically dangerous balls-to-the-walls eccentricity who easily outshine the unpredictable antics of their fellow cast members.

The deep pain and long-lasting trauma felt by Alcock at his father’s early demise, unconsciously permeates the entire book, yet it’s impossible to find a single sentence within this book where Alcock indulges in a moment of self-pity or self-serving outrage. This calm acceptance of his father’s cruel execution possibly reflects Alcock’s inbred Zulu pragmatism more than any element of the book. His ability to rise above difficult circumstances that might have blighted the character and integrity of a lesser man proves Creina Alcock kept her promise to her son when she foreswore earthly materialism but promised him, “I will prepare you for life in Africa”. With the original Only In Africa social experiment having reached its course, any honest evaluation of Alcock’s trailblazing career has to conclude that Creina’s simply stated ambition for her son turned out to be an immeasurably prescient gift.

I think it would be easy for any reader of this book to fall into the trap of perceiving the early material deprivation of Alcock’s childhood through a cosy, rose tinted “Out Of Africa” glow. A casual assessment of the many victims of violence calmly recounted within the book includes many significant human beings in Alcock’s life who failed to make it out of the Masinga death trap or who were tripped up by their bad choices when they also reached the big city; this book also serves as subtle, heartfelt testimonial to these fallen friends.

Third World Child is clearly a labour of love. It is also an unanswerable attempt by a man whose life has been often discussed in print and media to tell his story in his own words. Fortunately, Alcock’s concise, thoughtful prose has a natural unforced poetic cadence that enriches even the darkest tale. Even if he doesn’t write another book Alcock has emerged as a new leading man for a post-Liberation South African audience still keen to find a raft of new role models who can help the country form an inclusive, sustainable national identity.

Gil Oved
5.0 out of 5 stars I couldn't put the book down. If it weren't ...
Reviewed in the United States on August 30, 2014
Verified Purchase
I couldn't put the book down. If it weren't non-fiction it would be found in the genre of action/fantasy adventure. Hard to believe that one person has experienced so much and has come through it with such dignity, grace and aplomb.
Anyone interested in getting a deep insight about the turbulent times leading up to the end of Apartheid in South Africa and the early heady days of its new democracy - seen through the eyes of a unique individual who tasted a multitude of flavours of this diverse and complex country - should read this immediately.
Read more
3 people found this helpful
Helpful
Report abuse

Amazon Customer
5.0 out of 5 stars Great book. Having read My Traitor's Heart
Reviewed in the United States on October 28, 2014
Verified Purchase
Great book. Having read My Traitor's Heart, by Riaan Malan, I was familiar with the Alcock family story, so this book was really good to read. GG takes you on a crazy, amazing ride and inspirational too. Only in South Africa - read it!
Read more
Helpful
Report abuse

Annette
5.0 out of 5 stars Must Read
Reviewed in the United States on January 5, 2015
Verified Purchase
Gripping, dramatic and thoroughly entertaining! I couldn't put it down. A must read if you are interested in South Africa!
Read more
Helpful
Report abuse

Herman Stander
5.0 out of 5 stars Crazy crazy story
Reviewed in the United States on September 15, 2014
Verified Purchase
An insight to one of the most unique and interesting, but also sad and exiting life stories. I could not put the book down, its fun and easy to read. I loved some of the insights you get to the Zulu culture, and sayings they have; my book is full of interesting little highlights!
Read more
One person found this helpful
Helpful
Report abuse

Jann Gregson
5.0 out of 5 stars Well worth a read
Reviewed in the United States on October 19, 2014
Verified Purchase
Great book by an amazing person. What a life you have had and continue to have. God bless you GG we want more please xx
Read more
Helpful
Report abuse

Amazon Customer
5.0 out of 5 stars a book for anyone who has children or ever been a child,
Reviewed in the United States on March 15, 2015
Verified Purchase
A rare book, written. By a rare person. A real, white Zulu. A book for any one who has ever been to, lived in or thought about Africa.
Read more
Helpful
Report abuse
See all reviews

Redrose59
5.0 out of 5 stars A great warts and all read
Reviewed in the United Kingdom on July 13, 2015
Verified Purchase
What a read! If I was in a tight spot I'd want GG along side me but then again it would probably be GG who got me in the tight spot in the first place.
It shows the strength of the human spirit but also the utter cruelty. If only there were more men and women in this world like GG then surely it would be a better place. This book is a real warts and all read.
As they say in Africa............"Go for it"
Read more
One person found this helpful
Report abuse

Justin
5.0 out of 5 stars Eye Opening African Story
Reviewed in the United Kingdom on November 8, 2018
Verified Purchase
Everyone's unique, but some are exceptionally so. This book gives insight into African culture in a very special way. A must read for South Africans. Siyabonga uGG
Read more
Report abuse

Kariesa
5.0 out of 5 stars Astonishing tales from the heart of South Africa
Reviewed in the United Kingdom on September 24, 2014
Verified Purchase
A wonderful collection of stories that map the transition of not only South Africa as a country, but also of two white boys growing up and living the life that the African people experienced through apartheid. Some harrowing and some funny tales with real heart and soul poured into it.
Read more
Report abuse

AsGoodAsThis
5.0 out of 5 stars Third World Child: Born White Zulu Bred
Reviewed in the United Kingdom on October 16, 2014
Verified Purchase
Accurate rendition of spoken language,funny, sad, insightful. It needs to be followed by a book of memoirs with photographs too. Easy to read, and so good it needs to be followed by more. Those who don't like kindle want it easily available in print too in Europe.
Read more
Report abuse
See all reviews