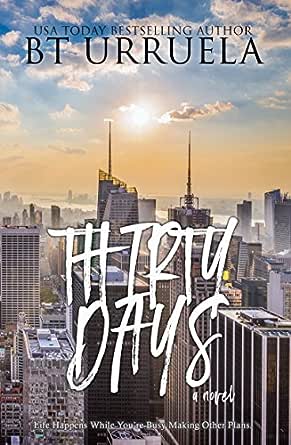 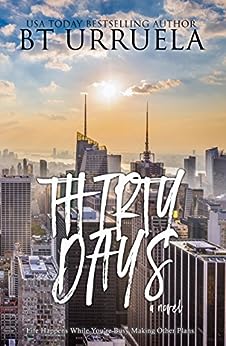 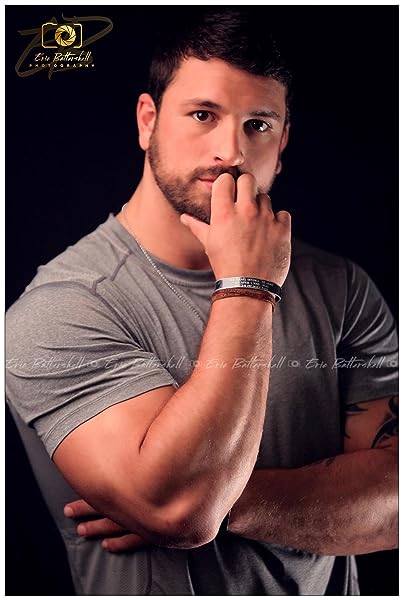 4.9 out of 5 stars
4.9 out of 5
40 global ratings
How are ratings calculated?
To calculate the overall star rating and percentage breakdown by star, we don’t use a simple average. Instead, our system considers things like how recent a review is and if the reviewer bought the item on Amazon. It also analyzes reviews to verify trustworthiness.
Top reviews

Cara Gadero
5.0 out of 5 stars A journey of the heart
Reviewed in the United States on February 27, 2018
Verified Purchase
Thirty Days - a Novel will take you on a journey of a man who needs to heal himself from a broken heart. He’s a struggling writer living in NYC who accepts a challenge that will help him find his way to being whole. The characters become your family and friends. Real, honest, hilarious and supportive. Mr. Urruela eloquently creates a world for his readers to immerse themselves in to share in Gavin’s trials and tribulations and allows them to feel in their souls how heart wrenching mental issues can be to overcome. You will laugh, cry and pray for Grace, Sami, Megan and Jovan. You’ll love Bobby as your own brother and want to join the crew at Peg Legs for a pint or two. The sights and sounds of New York City will come alive for you and you will yearn to grab a ticket on the subway to experience it for yourself. BT Urruela’s voice with this release is crystal clear and his growth as an author shines through every page. Do yourself a favor grab some coffee and indulge yourself you’ll thank me later.
Read more
4 people found this helpful
Helpful
Comment Report abuse

Shirley's Bookshelf
5.0 out of 5 stars a MUST read from BT Urruela
Reviewed in the United States on February 27, 2018
Verified Purchase
For me, Thirty Days is so much more than a romance novel ~ it’s a raw, real and honest look at the struggles to live with and attempt to overcome the effects of anxiety, depression and PTSD. It’s also a story of a man’s struggle to overcome his past in order to have a future. The experiences Gavin Mazzarelli has had in his past have shaped the man he is today, but have also put him in a dark place that he’s struggling to get out of. Through the support of his friends, some unconventional but effective experiences, and the opportunity to confront his past, he is given a new outlook that helps him move forward and get the control back in his life that he needs to heal.

BT Urruela has written a story that will draw you in and have you feeling all the emotions of his characters, and especially those of Gavin. His characters are real and relateable and ones you’ll want to know better.

When an author writes a story, they include a piece of themselves in at least one of their characters and I have no doubt that Mr. Urruela has included a HUGE chunk of himself in Gavin, and for that I say, “thank you”. It’s not easy to cut yourself open and reveal those raw places inside, and I respect you for doing just that so others can see they truly are not alone. I consider Thirty Days to be BT's best work to date.
Read more
3 people found this helpful
Helpful
Comment Report abuse

Mindy H
5.0 out of 5 stars I laughed, I cried and I fell in love with this story!
Reviewed in the United States on March 8, 2018
Verified Purchase
In this book you meet Gavin at his lowest, so low his friend tries to get him out of his funk by challenges his to go on three dates to bring him back into the world of living, but when Gavin rushes through them his friend offer him a better deal that he can't pass up, $25,000 if he goes on 30 dates in 30 days. You get to know Gavin and his thirty dates as well as he tries to navigate through his creative block with the help of drugs and alcohol. Bad dates, a visit with his ex and his struggles with writing has him questioning if he'll survive these dates, meeting Sami, a woman who he clicks with he's not sure his heart is in it to go on to the next date. Be prepared with tissues. Well written account of a guy climbing his way out of some deep lows. Great humor, engaging characters and Gavin's internal emotional war makes this a great read!
Read more
2 people found this helpful
Helpful
Comment Report abuse

Dawn Roether
5.0 out of 5 stars Thirty Days Will Not Disappoint
Reviewed in the United States on March 8, 2018
Verified Purchase
Thirty Days is a realistic look into the world of anxiety, depression and PTSD. Gavin is an author that is currently facing a huge wall of writer's block. Uncertainty and self doubt clouds his every day actions. He suffers from depression and PTSD from childhood, which only worsens his current situation of being single and unable to pick up the pieces and move on after a break-up with his girlfriend whom he though was "the one". To help him get on track, his best friend challenges him to go on thirty dates in thirty days. If he completes the challenge, he will be awarded ten thousand dollars. If he doesn't complete the challenge, he must submit his completed book in a short period of time. Of course Gavin needs the money and can never say 'No' to a bet.

This will walk you through Gavin's life and the struggle of trying to juggle dates, life and what family he has left, along with navigating through his depression and writer's block. Will Gavin complete the challenge and find love during the process or will serial dating backfire on him?

Thirty Days is a great read. Very well written. I will purchase a paper copy for my bookshelf in addition to my kindle version.
Read more
One person found this helpful
Helpful
Comment Report abuse

Amy D
5.0 out of 5 stars An amazing story that will stay with you, a must read
Reviewed in the United States on March 8, 2018
Verified Purchase
Gavin's story is beautifuly emotional tale of heartbreak, despair, friendship, hope, and love with a bit of comic relief.
We meet Gavin when he is a very low point. He's struggling with heartache, depression and PTSD. We are taken on his thirty journey in the world of swipe dating. Along the way we learn Gavin's weakness, fears, and sorrows, but we also get to see his amazing friendships, the love of family and strength he didn't know he had.
I cheered when Gavin gave a much deserved FU, I cried when he was heart broken, I wore a silly grin when things took an turn for the better and I even did a little fist pump for his Grandma. When it ended it felt like saying goodbye to an old friend.
This is an amazing journey written beautifully.
Read more
One person found this helpful
Helpful
Comment Report abuse

okplains
5.0 out of 5 stars Ugly cry
Reviewed in the United States on July 25, 2018
Verified Purchase
I have felt Gavin's story. The shadows that cover the curves of your heart endlessly. I've struggled with depression for years. The weight of secrets, the guilt, pain. I don't think I have ever read a book so accurate in it's descriptions of the grief process. Thirty Days is about a guy who gets challenged to begin living again by going on thirty dates in thirty days. It's not a hook up story. It's powerful and painfilled. It hit pretty close to home for me.

"We live our lives with these filters we develop from past experiences. It bleeds over into everyday life, and what should be new, refreshing, exciting experiences, when treated and viewed through these filters, become quite the opposite."

Every word true. I think this may be my new favorite. Even if it did make me ugly cry.
Read more
Helpful
Comment Report abuse
See all reviews

Sharlene
5.0 out of 5 stars A Heartwarming Slow Burn...
Reviewed in the United Kingdom on June 30, 2019
Verified Purchase
I actually discovered this author through the book cover of another story; Regret by April Wilson. Intrigued to find a male cover model becoming an author of romantic fiction, it was a surprise to find it was the other way round: after finding out about Mr Urruela's own story, I decided to 'give him a go', the 99p cover price an unexpected bonus.
This 'quiet' story is semi-autobiographical and as such feels real, I loved the flowing writing style which is both humorous and poignant: there is no 'instalove' or 'wham bam thank you ma'am'!!
The blurb explains the premise of the story and I don't want to comment on the plot as I would inevitably reveal spoilers: Gavin is flawed, like all of us and can be defeatist; he has a great group of friends in Bobby, Javon and Andy (he's hilarious!), who he discovers know more about him than he thought and Nurse Jackie seems to be a bit if a mother figure that he lacks. At one point, I was going for a 4* review; I was getting pretty annoyed with Gavin covering his bases, guessing what was going to come. However, him FINALLY dealing with 'the ghost of fiancee's past' and Bobby's reaction to it was great. The sadness towards to end was tempered by reconnecting with Jared, Gavin's surge of creativity and him confronting his mistake of omission.
I don't know if a follow up book is on the horizon: I would love to know what happens next, particularly if Gavin is able to rid himself of the two 'crutches' that he relies on; one that he acknowledges, the other, not so much.
Conclusion - I am a massive re-reader of books (to the bewilderment of many!!) and at the end of the day, that is how I make my final judgement. Would I re-read this book? Absolutely!!
Read more
Report abuse
See all reviews