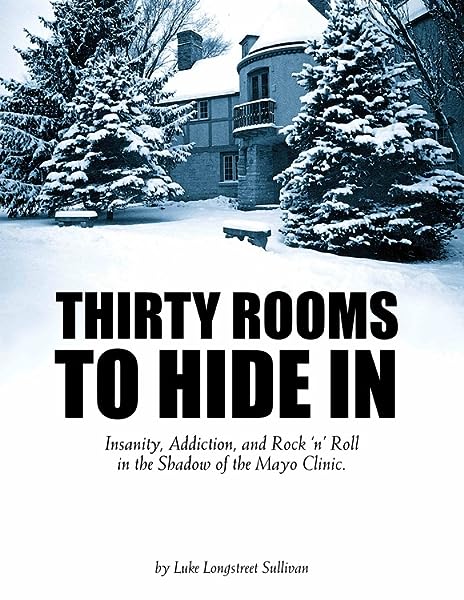 Thirty Rooms to Hide In: Insanity, Addiction, and Rock 'n' Roll in the Shadow of the Mayo Clinic Hardcover – August 31, 2012

Luke Longstreet Sullivan is chair of the advertising department at the Savannah College of Art & Design. Born and raised in Rochester, Minnesota, he currently resides in Savannah, Georgia, with his wife and two sons.

4.3 out of 5 stars
4.3 out of 5
110 customer ratings
How does Amazon calculate star ratings?
Amazon calculates a product’s star ratings based on a machine learned model instead of a raw data average. The model takes into account factors including the age of a rating, whether the ratings are from verified purchasers, and factors that establish reviewer trustworthiness.
Top Reviews

Candygrl5
5.0 out of 5 stars A Poignant Read!
Reviewed in the United States on October 26, 2017
Verified Purchase
Wow...this book was truly written from the author’s heart. His memorable recounting of his life with a horribly abusive, alcoholic father, 5 brothers & loving mother is amazing. The author tells of life from not only his perspective but that of each member of his family, including his mother, brothers & maternal grandfather . SO well written..poignant, painful, darkly humorous. I laughed, cried, was pained & relieved...all kinds of emotions! This book had me from the first line...extremely talented writer & an amazing man to have lived to tell of his horrid, sometimes humorous life. The story is as much about him as it is his mother’s, an eloquent caring mother who did what she could to try & protect her six sons from the monster who was their father..especially considering the times she lived in. A must read! God bless Luke Longstreet Sullivan and the remaining members of his family!
Read more
2 people found this helpful
Helpful
Comment Report abuse

Patricia A. ESQ
5.0 out of 5 stars terrific
Reviewed in the United States on May 19, 2013
Verified Purchase
Quite a story written by one of the six sons born to Mayo physician Sullivan and his wife, Myra. Dr. Sullivan was the only child of cold parents driven to great academic achievement, culminating in his employment at Mayo Clinic. He falls in love with Myra Longstreet, they marry, and thus begins a story that should have and could have been a recounting of lives well spent. It was not to be. The good doctor morphed into a raging (literally) alcoholic, and his son Luke fills this book with his family's reminiscences from the outset of his drinking to the devastating final days.

Even the best and most advanced treatment of the day could not arrest Dr. Sullivan's drinking. At that time, Alcoholics Anonymous was just getting under way, so Dr. Sullivan underwent psychiatric intervention in a hospital -- a treatment doomed to fail with the alcoholic. And fail it did. Dr. Sullivan died in a cheap hotel room miles from his sons and wife at the age of 45.

The author describes the lives he and his brothers lived in the maelstrom created by his father; they probably only survived due to the love, warmth, and protection given them by their incredible mother. She's someone I would like to know. And the brothers hung together, finding black humor all around them. While it may not seem so, this is a very funny book filled with all the mischief 6 boys can get into.

I hope Luke Sullivan writes the book he alludes to on the last page of this book. I would certainly preorder it.

Alex2054
5.0 out of 5 stars I can relate. This is a great book
Reviewed in the United States on March 28, 2016
Verified Purchase
I'm the same age as Mr. Sullivan, also worked in advertising, and came from a family of five kids (not six, as in his case). I can completely identify with the humor and the horror of his family story, as well as his pitch-perfect recreation of the last innocent period of US life--from the mid-50s through 1966. This is a great book--and a great tribute to his mother, Myra, for whom the term "heroic" is completely inadequate. She held the family together and raised six sons to manhood in the middle of hell. She shines in this book, as well she should.
Read more
2 people found this helpful
Helpful
Comment Report abuse

Retirement is the Best
5.0 out of 5 stars An Inside View Into the Tragedy of Alcoholism
Reviewed in the United States on January 17, 2013
Verified Purchase
When I initially starting reading the book I was concerned that it was going to be a subjective bashing of the father. This was not true as the author researched and included multiple viewpoints not only from family members but identified outside resources. He develops the progression of the very sad disease of alcohol abuse and how it impacts each family member. The mother was a strong, independent woman who reached out for help but was a victim of the times. The book also points out the progress made in the treatment of the disease and reinforces the benefits of AA programs. Lukes description of going to the motel where his father spent his last days was amazing with a dark, poetic tone. Living in Rochester, MN we know many people who grew up with the Sullivan family. It was also interesting to identify with the geography and familiar names. Luke has incredibly talented writing skills, I suspect handed down from his mother.
Read more
4 people found this helpful
Helpful
Comment Report abuse

HJH
5.0 out of 5 stars Captured My Attention
Reviewed in the United States on December 14, 2012
Verified Purchase
I didn't want to like this book. I read voraciously at a pace of approximately 3 or more books on my kindle a week. Just about any subject is game. As I grew up in Rochester during this time period and still live here, I approached this book with an admittedly snobbish outlook. Thought I was going to be reading a story about some spoiled doctors kids. For those of us that grew up in the shadow of Mother Mayo and weren't doctors kids we tend to have a crusty attitude towards those that appeared privileged. There was a caste system back then, you were either dubbed a "hood" or a "pill" depending on your dads profession or the location of your house. There is an area in Rochester known as "Pill Hill", which is as self explanatory as is the designation "hood". I decided I wanted to read it because of the location, people and era it was written. I was so wrong in judging this book by it's author. Yes, it was fascinating to read about many events and people I recall from the past. But that is not nearly what kept me turning the pages. It is an eye opening revelation into the lives of a family struggling with an alcoholic father and husband. Poignant and funny. Sad and reflective. Yet, I can tell you this EXACT tragedy continues in families today with the same paralyzing fear that keeps them from getting the help they need. I was discussing this book with a friend in my book club, who incidentally is the wife of a current Mayo Clinic Orthopedic Surgeon. She and her husband had both read it. She told me to expect a surprise ending. As I neared the end I kept thinking I must be missing something because I wasn't catching on. Well yep, there it was and how obvious. The signs were clearly evident throughout. Can't believe I missed it. Loved this book. Hoping for more from this author.
Read more
6 people found this helpful
Helpful
Comment Report abuse
See all reviews from the United States