This Crooked Way (Morlock Ambrosius Book 2) and millions of other books are available for Amazon Kindle. Learn more
Share 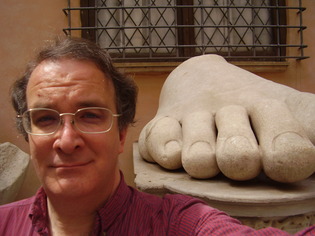 Legends spar in Enge's episodic fantasy, narrated by an ensemble cast in achingly precise prose. Immediately following the events of Blood of Ambrose (2009), the crooked-backed enchanter Morlock departs into exile on his horse, Velox. When a stone beast ambushes the strange pair and Velox disappears, Morlock goes in search of his horse and finds a long-lost figure from his past who desperately needs his aid. So begins Morlock's long, meandering journey, narrated by those he befriends on the way. The supporting characters all initially regard the dispassionate wizard with awe, but as they gradually discover his flaws, they learn some delightfully compelling psychological facts about their own inadequacies. When the ending finally does arrive, its anticlimactic events disappoint, but there's enough strength in the rest of the story to keep readers hoping for a redemptive third book. (Oct.)
Copyright © Reed Business Information, a division of Reed Elsevier Inc. All rights reserved.

Start reading This Crooked Way (Morlock Ambrosius Book 2) on your Kindle in under a minute.

Greg
5.0 out of 5 stars A clever, witty, and darkly whimsical series.
Reviewed in the United States on September 21, 2010
Verified Purchase
Already an exile, Morlock Ambrosius is now also officially an outlaw in This Crooked Way. Winter finds him wandering when his horse, Velox, is stolen. Previous adventures have earned Morlock's loyalty to the mystical steed and it's apparent that the horse theft is a tactic to lure Morlock into a series of traps orchestrated by an enemy from his past. So into the dangerous pass called the Kirack Kund -- dwarvish for "The River of Skulls" -- The Crooked Man goes. This quest will end up lasting several years in which Morlock encounters golems, monsters, rival sorcerers, insectoid tribes, thieves, street gangs, and dragons, and even sort of adopts (or perhaps is adopted by) a misfit family.

This is the second novel Mr. Enge has written about his intriguing character. He has also written short stories about Morlock in Black Gate magazine and in the anthologies The Return of the Sword and Swords and Dark Magic. Morlock Ambrosius is one of the most fascinating and fun heroes in fantasy. Simply said, I'm hooked.

Morlock is a genius. He was fostered by dwarves a couple centuries ago and he learned swordplay from the greatest master of all time. He is very proficient in most all the arcane arts, which only makes sense, because his father is none other than Merlin himself. However, Morlock's unmatched expertise is in the making of magical things. With his great engineer's mind, he meets every problem, no matter how deadly, with a cold, calculating thought process, like it's a mere mathematical riddle to be solved. He can be ruthless; an alcoholic, currently a recovered one, he threatens murder when offered a drink one time too many -- a threat he surely would've acted on. But he can also be compassionate -- showing mercy to treacherous enemies or putting himself in harm's way for a stranger.

The events that build up to the ending of This Crooked Way read much like a series of continuing short stories in the tradition of sword & sorcery tales. Many different characters tell of these adventures; some are told by friends of Morlock but more than a few by his foes. The various points of view, influenced by the terrifying stories that all have grown up hearing about The Crooked Man, only deepen the mystery of Morlock Ambrose.

These stories are as clever, witty, and darkly whimsical, as Morlock is himself. I plan to read them all and I'll also be watching closely for anything else James Enge writes.

Colin A. Brodd
5.0 out of 5 stars Another great Morlock Ambrosius novel!
Reviewed in the United States on June 23, 2020
Verified Purchase
Unlike the first installment, which was basically one long narrative structure, this second volume of fantasy/sword-and-sorcery fiction featuring Morlock Ambrosius is more episodic, divided into a number of interconnected smaller storylines told from different perspectives. It really is some fine writing, and I highly recommend it, along with any other fiction by James Enge!
Read more
Helpful
Report abuse

Yawning Lion
4.0 out of 5 stars Reminiscent of the Dying Earth
Reviewed in the United States on March 24, 2011
Verified Purchase
I've grown to love Enge's style of writing because I NEED to feel the characters...I need to sympathize with them on some level. Enge does a great job of fleshing out the main characters, and not just the main protagonist, but also those characters with whom he interacts.

Throughout a good part of the novel, which consists of short stories that are linked to each other, Morlock is part of an adoptive and somewhat dysfunctional family, and the interaction between them is humorous. I also like how some of the episodes are told from a different character's point of view, which pleasantly adds to the variety of concepts and imagery.

My favorite aspect of the book though, is how it vaguely reminded me of Jack Vance's "Dying Earth". Morlock, in one episode, has to chase his shoes which have been magically imbued with life and are fleeing from him, through a deadly forest, and his dialogue with a hungry and peevish dragon trapped in a pit and also a loud and stupid troll under a bridge made me laugh out loud.

Blowing Green
5.0 out of 5 stars A work of genius
Reviewed in the United States on November 27, 2016
Verified Purchase
I thoroughly enjoyed this novel. The author is genius imho. As you read the book you get to know Morlock and understand why he's a legend in this fantastic land. The plot takes unexpected turns, and at first it's difficult to follow because of how it weaves different voices in the narrative. The use of multiple voices adds a lot to it. I strongly recommend it to anyone.
Read more
Helpful
Report abuse

Matt C
3.0 out of 5 stars Three Stars
Reviewed in the United States on October 15, 2015
Verified Purchase
I really like the characters but many story elements seem like after thoughts. Entertaining but far from high literature.
Read more
Helpful
Report abuse

Evan J Asselstine
5.0 out of 5 stars The Crooked Way
Reviewed in the United States on April 17, 2013
Verified Purchase
This is an excellent read. James Enge tinges his most dangerous protagonists with just the right amount of humanity and humor to make them come alive. They are both funny and real and the book moves along at a good pace and is a very good read, tough to put down once you start.
Read more
One person found this helpful
Helpful
Report abuse
See all reviews

KJ Charles
4.0 out of 5 stars Pretty good fun
Reviewed in the United Kingdom on March 3, 2011
Verified Purchase
I came to this author via a giveaway on Kindle. Nice world building and entertaining characters make for a very moreish read. This is definitely not great literature, and the author could plot a lot more tightly - this is very picaresque, unlike the superior  Blood of Ambrose  - but I thoroughly enjoyed it and will doubtless be picking up the next one.
Read more
Report abuse
See all reviews