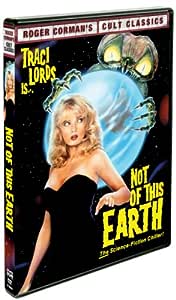 Not of This Earth (Roger Corman's Cult Classics)

When a mysterious stranger (Arthur Roberts, Up In Smoke) arrives in town, he hires Nadine (Traci Lords, Blade, Cry-Baby) as his private nurse. Although the pay is great, she becomes more and more suspicious of the stranger when his request for blood transfusions become more frequent. After some junior detective work, Nadine finds out that her new boss is not who he appears to be . . . and he is not even from our planet!

4.4 out of 5 stars
4.4 out of 5
132 global ratings
How are ratings calculated?
To calculate the overall star rating and percentage breakdown by star, we don’t use a simple average. Instead, our system considers things like how recent a review is and if the reviewer bought the item on Amazon. It also analyzes reviews to verify trustworthiness.
Top reviews

Not of This Earth DVD includes an interview with Tracy Lords, and audio commentary with Lords and the director, Jim Wynorski. Anamorphic widescreen, and it looks great!

An obscure corner of the world of cinema. Take the plunge! Traci Lords didn't quite have a big break with this one, but in retrospect this is the best way to start out in Hollywood. She's snarky, and makes a good hero, but underutilized due to the mission statement of this ready-made cult classic. Loveable, quirky tribute to the golden age of sci-fi horror, and a product of the 80's, this film is layered in that respect. Good times! Glad I found it.

Dan
5.0 out of 5 stars Traci Lords vs a powerful alien being.
Reviewed in the United States on January 15, 2015
Verified Purchase
From the makers of Chopping Mall comes Not of This Earth!

Plot- A strange man comes to a hospital looking for blood. Upon discovery that his blood is strange, the doctor sends nurse Nadine (Lords) home with him. She must give him a blood transplant once a day. Soon things get out of hand, and it's discovered that the strange man is actually a member of a dying alien race, that must transport blood to the home world for survival...

My thoughts- This is one of Jim Wynorski's better movies I must say, and possibly the funnest. Lords does a decent job, Arthur Roberts does a terrific job as Mr. Johnson, Ace Mask does a good job as Dr. Rochelle, and Michael Delano isn't too bad as a vacuum salesman. The rest of the cast isn't worth mentioning. The effects, I think are actually pretty cool. The movie doesn't take itself that seriously, and is super cheesy, but that's what makes it fun. My only issue with the film is that it uses stock footage from other Corman productions, like Humanoids from the Deep; however it's only a little bit so I don't mind it that much. It does have its fair share of both intentional and unintentional hilarity. It's a b-movie, but a great b-movie. There are much worse Corman productions out there, i.e. Attack of the Crab Monsters.

Fun Facts- The opening credits feature a montage of clips from various other Roger Corman movies, including Battle Beyond the Stars (1980), Forbidden World (1982), Galaxy of Terror (1981), Humanoids from the Deep (1980), Battle Beyond the Sun (1959) and Piranha (1978). Sample footage from each of these movies appears numerous times throughout the movie as filler footage, as well as two full-length scenes from Hollywood Boulevard (1976) and "Humanoids from the Deep". Becky LeBeau's scream was done by Michelle Bauer. Director Jim Wynorski made a bet with Roger Corman that he could shoot the movie in twelve days. Wynorski finished the film in eleven and a half days. Angel Tompkins did the voice of Rebecca Perle's Davanna Girl character.

Final Word- Worth a look for B-movie fans and or Roger Corman/Wynorski fans.

AUTISTIC WEREWOLFTop Contributor: Photography
5.0 out of 5 stars A GOOD RAINY DAY, SNOWY DAY \ BAD DAY MOVIE WHEN YOU NEED A LAUGH, A FRIGHT & A SCI FI MOVIE FIX!
Reviewed in the United States on June 25, 2015
Verified Purchase
I had been hunting like crazy for this remake of a cult classic and like always found it on Amazon.com. Amazon.com for a large company does really good at stocking rare weird or hard to find DVD titles. Not of this earth video quality is7 or 8 out of a possible 10. Sound quality is equally 7 or 8 out of a possible 10. The video is not painstakenly remastered to awesome standards but the film is largely intact, color is good, saturation is good, there are no artifacts on the copy. Sound there is no buzz or hiss, the vocals are clear and the effects are clean. The film shows its age a bit but never so much that it interferes with enjoyment of the movie. The acting well the star was a former adult film star and it shows in her style. Not Of This Earth works as both a horror movie and something fun to laugh at. Not Of This Earth has some down right creepy moments so it is legitimate horror and sci fi blended together to create a unique experience for sure.

When I purchased Not Of This Earth the price was not out of this world high it was very reasonable. This is the perfect movie to watch when you aren't trying for something too serious and just want to have a spot of fun. Not Of This Earth is the kind of movie you watch on a rainy, snowy day when the real world has just gotten on your last nerve and you want to watch something weird to recover your good humor.
Read more
5 people found this helpful
Helpful
Comment Report abuse

Fred Adelman
VINE VOICE
4.0 out of 5 stars Grab a copy!
Reviewed in the United States on February 6, 2015
Verified Purchase
This first remake of director Roger Corman 50's film of the same name (this one was directed by Jim Wynorski) is groundbreaking for one very special reason. It was Traci Lords' first non-porn film and she looks great in a bathing suit sitting by the poolside. Story-wise, the plot is not much different than the original film, except this time there is much more humor. But, oh boy, if you want to see Traci Lords looking her greatest (most of her porn films were pulled from circulation since she was under-aged when she appeared in them and used a fake birth certificate), you must purchase this film. It is not the greatest film ever made, but it is a little piece of film history. The print used in the film (by Shout! Factory) looks great and is in anamorphic widescreen, so you will never find a better copy. Get it while you can. Shout! Factory has discontinued their Roger Corman line and will not be pressing any more copies of his films. Make this one part of your library!
Read more
6 people found this helpful
Helpful
Comment Report abuse
See all reviews

Mssusan A. Carr
4.0 out of 5 stars nicely spooky
Reviewed in the United Kingdom on June 3, 2016
Verified Purchase
interesting corman film,making substance out of little.love the ending.
Read more
Report abuse

Gary A. Smith
4.0 out of 5 stars Great B-Movie at last on DVD
Reviewed in the United Kingdom on May 8, 2010
Verified Purchase
Not of This Earth has been MIA for decades so this DVD release is certainly welcome. Unfortunately, unlike its companion feature Attack of the Crab Monsters, the transfer is not taken from the theatrical version. It is the TV version which was padded out with repeated scenes (note the chase at the end) plus a written prologue and end cast which were not in the original version. This complaint aside, it's great to see this B-Movie classic again and chances are we'll never see a better copy.
Read more
32 people found this helpful
Report abuse