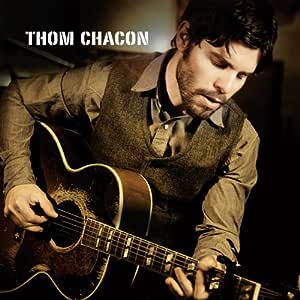 Thom Chacon could well be the subject for one of his own evocative songs. On his self-titled sophomore album on the Pie label, the Durango, CO, singer-songwriter takes on the American Dream in no uncertain terms. Recorded at producer Perry Margouleff s famed Pie Studios in Glen Cove, N.Y., with Bob Dylan s rhythm section of drummer George Receli and bassist Tony Garnier, Thom Chacon offers a series of compelling narratives that focus on the forgotten members of society.

Born in Southern California, but raised in Sacramento, Chacon is the son of a Hispanic father, a newscaster who became a public relations executive, and a Lebanese mother, a kindergarten teacher, with five sisters (he was the second youngest). He first showed an interest in music at a young age, offering as proof a tape recording of him singing Rhinestone Cowboy as a three-year-old. Thom listened to story-tellers like Glen Campbell, Jim Croce, the Beatles of Rubber Soul and Smokey Robinson on his parents record player before picking up a guitar in fourth grade. He wrote his first song at age 16. It wasn t very good, but in all these years, I ve never stopped. It s something I have to do.
Seeing Kris Kristofferson wear a harp rack inspired him to don one as well. If you re a solo artist, it s your second band mate, he says, before adding, for me, it s less about my voice and guitar-playing then it is the words and melody, which is why I modeled myself after what he was doing.

Moving to Los Angeles in his early 20s, Thom originally sought fame and fortune in the L.A. music scene, then quickly realized he needed something more authentic. He took a job on a horse ranch in the foothills of Los Angeles, learning how to ride and take care of the horses. Eventually, Thom decided to move to Durango, Colorado, seeking more of life s outdoor adventures, and to concentrate on his songwriting. Thom became a part time fly-fishing guide, and when not on tour, takes people on horseback into the mountains of Colorado and New Mexico for extended camping and fly-fishing expeditions.

The cinematic nature of Thom s songs comes not only from spending time as a true outdoorsman, but also from a love of movies and vintage television westerns, with a special affection for the films of John Ford, and John Wayne, a favorite of his mom.

Thom s narrative style is influenced by Kris Kristofferson, Steve Earle and Townes Van Zandt, among others. He also draws influence from his colorful family history. His second cousin, Bobby Chacon was two-time boxing featherweight champion. Bobby taught me no matter how hard it gets, you ve go to get up off the mat and keeping fighting. His grandfather was deputy sheriff in Silver City, New Mexico and part of the posse sent to capture Billy the Kid!

Thom has gone on to tour around the world, opening for artists as diverse as Los Lonely Boys and Jason Mraz, playing shows in Thailand and India, and even one memorable gig on July 4, 2004 at Folsom Prison, shortly after the death of another of his idols, Johnny Cash. That was a life-changing experience for me, he says.

With his current music reflecting a good dose of lifetime experiences, along with the hard-earned wisdom of a man who s paid his dues both on the land and the water, Thom Chacon is now being touted by the press as an Americana original and one of the most important songwriters of our time.

5.0 out of 5 stars
5 out of 5
14 customer ratings
How does Amazon calculate star ratings?
Amazon calculates a product’s star ratings based on a machine learned model instead of a raw data average. The model takes into account factors including the age of a rating, whether the ratings are from verified purchasers, and factors that establish reviewer trustworthiness.
Top Reviews

JTM
5.0 out of 5 stars This guy is a superstar in the making!
Reviewed in the United States on July 19, 2019
Verified Purchase
Finding Thom Chacon's music was an accidental but very happy discovery. It's honest, clever, mellow, and simply great. He's a singer-songwriter with a great future!
Read more
Helpful
Comment Report abuse

Cy Michelle
5.0 out of 5 stars Love this American Dream
Reviewed in the United States on July 8, 2013
Verified Purchase
A mix between country-folk with harmonic tones, this album gets played over and over at my house. Every song evokes emotion as Chacon guides you through the pains of an Innocent Man to the world that is Juarez, Mexico. Often sad, he mixes in uplifting tunes like A Life Beyond Here and ultimately leaves you to determine your own American Dream. A unique sound that quickly becomes addicting.
Read more
Helpful
Comment Report abuse

Joseph Ciccotelli
5.0 out of 5 stars go out and buy ASAP
Reviewed in the United States on March 30, 2013
Verified Purchase
First let me say that I am biased. I saw Thom open up for Los Lonely Boys in a small club in NYC. He play solo on acoustic guitar and had the crowd in the palm of his hands. After the show we talked and not only was he a talented musician but a humble nice person. I was so impressed with him and his music.
Now his new cd. His songs are short stories that grab you by your heart and mind. His singing is soft but strong at the same time. He takes you into a world that you fell at home in. He intertwines intelligent lyrics with his music and they mesh together. He is a poet that doesn't preach. It is very much a fun cd that I highly recommend. I hear Steve Earl, John Prine, Springsteen and Dylan. No, he is not the next Dylan. There will never be another Dylan. But he is Thonm Chacon and trust me that is more than enough.

tortua
5.0 out of 5 stars Great lyrics - loving voice!
Reviewed in the United States on May 25, 2014
Verified Purchase
Thom seems like someone I'd like to know - a gentle, thoughtful cowboy. His music takes me to a happy place!
Read more
Helpful
Comment Report abuse

Amelia
5.0 out of 5 stars Love at first song!
Reviewed in the United States on November 10, 2015
Verified Purchase
I could listen to Thom Chacon all day. I am looking forward to many more songs.
Read more
Helpful
Comment Report abuse

Daniel Cinnamon
5.0 out of 5 stars I am hooked.
Reviewed in the United States on November 20, 2013
Verified Purchase
This is an amazing album and I highly recommend it. I am hooked. I really enjoy the vocal melodies and can identify with each song’s message about life, love and struggle.
Read more
Helpful
Comment Report abuse

michael patrick sheehy
5.0 out of 5 stars GREAT
Reviewed in the United States on May 14, 2013
Verified Purchase
This is really good.I love this music and story telling Thom is GREAT and I highly recommend getting this album.
Read more
Helpful
Comment Report abuse
See all reviews from the United States