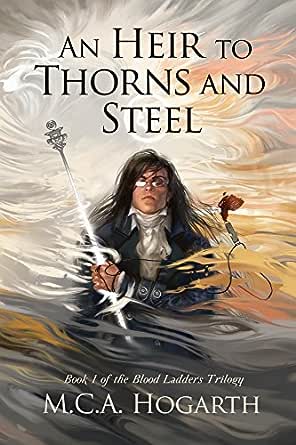 You've subscribed to Blood Ladders Trilogy! We will preorder your items within 24 hours of when they become available. When new books are released, we'll charge your default payment method for the lowest price available during the pre-order period.
Update your device or payment method, cancel individual pre-orders or your subscription at
Your Memberships & Subscriptions
There was an error. We were unable to process your subscription due to an error. Please refresh and try again. 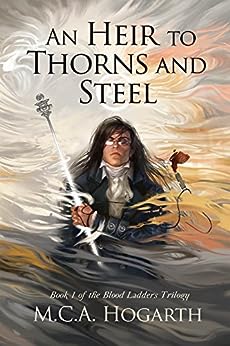 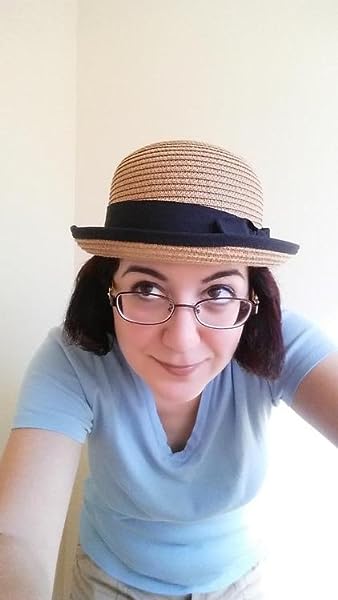 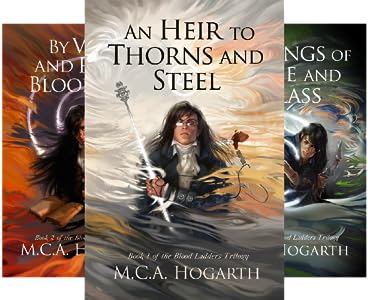 4.2 out of 5 stars
4.2 out of 5
42 customer ratings
How does Amazon calculate star ratings?
Amazon calculates a product’s star ratings based on a machine learned model instead of a raw data average. The model takes into account factors including the age of a rating, whether the ratings are from verified purchasers, and factors that establish reviewer trustworthiness.
Top Reviews

K Orion Fray
4.0 out of 5 stars Brilliant story, clearly leading into even better times in the next books
Reviewed in the United States on August 29, 2017
Verified Purchase
Having spent as much time as I have in Hogarth's Pelted universe, stepping outside of it--no matter how sure I am of her talent--is a little unnerving. The Blood Ladders trilogy is definitely not the Peltedverse, and AN HEIR TO THORNS AND STEEL is book one of Morgan Locke's adventure into worlds he truly never believed to be completely real.

Morgan Locke is a student at Leigh University, studying philosophy and ancient legends. It's a prestigious school, and not one where any type of weakness is to be tolerated--which is problematic, because Morgan has suffered from intense chronic pain and seizures for most of his life. For the time being, he knows what pattern they follow and has managed to keep his friends and teachers in the dark as to his condition, but as it progressively gets worse...it becomes harder and harder to explain away. So when a curious twist of fate accompanied by two incredibly unlikely messengers comes by with a chance to turn his entire world upside down and maybe...just maybe...bring him a tiny amount of relief, it's a hard-pressed battle for Morgan to take the risk and jump into the unknown and likely unreal...or stay with the devil he knows.

Now, having not lived with chronic pain, I can't speak to the level of agony Morgan goes through. The attacks are constant and debilitating, and the amount of the book they consume truly emphasizes how much of Morgan's life has been chewed up by this. Others I've seen say that it slows the plot down, and I'd argue that it does--and it should. Morgan's entire life has been weighed down by this; it wouldn't make any literary sense to see time flying by. I've lived my whole life with someone with chronic pain, and I can absolutely believe every moment that Morgan endures. It also allows me to celebrate with him in the moments he is free of the pain.

I'm truly baffled by some of the reviews I've seen for this book. I will say that yes, there is a level of depravity in the elves that is truly unsettling, and it does border on a level of uncomfortable that makes me want to put the book down. But that's the point. We're supposed to see the dark sides along with the light, and it's certainly true that Kelu spends more than enough time telling Morgan how awful the elves are. And yes, their relationship with the genets is equally unsettling. Often times, relationships (and I use the term lightly) like this are.

Nothing about this book is meant to be easy. Morgan's life is a struggle, the balance between worlds is a struggle...and all in all, this is a very thought-provoking book with a brilliant world in the making. It's a smart book which will make you hope you have a dictionary nearby. It's a touching book which can have you laughing one moment and in tears the next. It's a perfect example of Hogarth's brilliant storytelling, and it is absolutely recommended. These are real characters who you will form real relationships to, and at the last page you will already be reaching for the next book.

Scott A. H. Ruggels
4.0 out of 5 stars but the tone started very much like a regency novel
Reviewed in the United States on September 8, 2015
Verified Purchase
I have been reading this author for many years, and had read this originally as a serialized work of fiction on her Live Journal, a few years ago. when this was published I purchased a Kindle copy and red it. generally I am of the opinion, that this author often writes in "pastel colors", where characters are generally reasonable, and talk through their differences. This however, is a story in bold colors and contrasts. I knew it was a fantasy, but the tone started very much like a regency novel, with the protagonist and his friends engaging in witty banter at the university, in a country that recently has become a republic. After the protagonist discovers his heritage, and a possible cure for his agonizing affliction he had, until now, been concealing from his friends, thanks to the appearance of a pair of talking creatures, he flees his home and accompanies the creatures to a distant land. For a Fantasy, the tone was not of magic, and "myth" was something studied in the university, and debated over chocolate, in the parlors and salons surrounding the University, until our protagonist arrives in the Archipelago, and it strikes him in full force, and is used to enslave him. The archipelago had a whiff of the French misrule of Haiti, and a sort of decadence that near immortality can breed. The book was engaging, and unlike other reviewers, I was not put up with the protagonist's (Morgan Locke), constant, and chronic suffering, as it illustrated the strength of the enchantment put upon him as a baby.

After Morgan's exit from his home, I did miss the banter of his friends, but his two creature companions were entertaining with Almond keeping spirits up, and Kelu keeping Morgan from grounded. They also turn out to be the cutest vampires in fiction. The story moved along well, and the characters were all distinct. I'd recommend the book as well written, and not your standard fantasy. Be advised it is the first, of a three book trilogy, though.
Read more
9 people found this helpful
Helpful
Comment Report abuse

(One note: the book deals with the protagonist's chronic illnesses in equally vivid detail, which some may find distressing. In addition, the elves are, for various reasons, largely amoral to the point of sociopathy; while there is a concrete explanation (eventually) for why this is going on, and I don't believe it was gratuitous, it does result in many scenes of sexual abuse and torture.)
Read more
3 people found this helpful
Helpful
Comment Report abuse
See all reviews from the United States

april
1.0 out of 5 stars not for me
Reviewed in the United Kingdom on January 11, 2018
Verified Purchase
too masochistic and sadistic for me...gave up at 30%...this should have a warning attached: beastiality, sexualization of small, defenseless creatures...it does not help that they are imaginary ...and there is also lots of glorified vampirism..the whole concept is depressing and unethical...i do not know if the text improves...i do not have the patience to find out...sorry i bought it..by reading one participates in the action, and i do not want to...so not for me...
Read more
3 people found this helpful
Helpful
Sending feedback...
Thank you for your feedback.
Sorry, we failed to record your vote. Please try again
Report abuse

Mig Bardsley
4.0 out of 5 stars A good read. I have bought the next in the trilogy.
Reviewed in the United Kingdom on January 11, 2018
Verified Purchase
A pretty good and attention holding first part of what looks like being a fairly epic trilogy which begins with Morgan a young scholar battling a crippling illness and ends with him setting out on a quest. In between, he discovers that he is wanted by elves and travels to their land escorted by two delightful creatures.
I'm grateful that Ms Hogarth concluded this first book of the trilogy at a natural pause in the story. I liked the diverse characters and the plot was interesting. The world building was colourful and strong and very enjoyable to read through.
My only criticism is that Morgan's constant suffering became a little tedious. I can see that it is essential to the story to some extent but I got tired of it. It was as if every high point of the story was punctuated by an attack followed by him passing out and waking up being cared for tenderly by someone or other.
Read more
Helpful
Sending feedback...
Thank you for your feedback.
Sorry, we failed to record your vote. Please try again
Report abuse

K. L. Adey
5.0 out of 5 stars Teamwork and an Unlikely Hero
Reviewed in the United Kingdom on December 23, 2017
Verified Purchase
The cover artwork initially put me off but I was very glad that I decided to read this book as I found it difficult to put down. The characters are well crafted and it has humour, pathos, excitement, danger and a few twists and turns that come out of nowhere. Already have the second book ready to go.
Read more
Helpful
Sending feedback...
Thank you for your feedback.
Sorry, we failed to record your vote. Please try again
Report abuse

And can I have a genet? Those things are utterly adorable.
Read more
Helpful
Sending feedback...
Thank you for your feedback.
Sorry, we failed to record your vote. Please try again
Report abuse