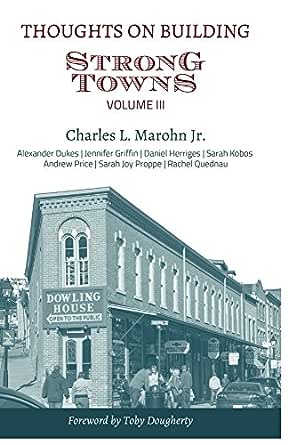 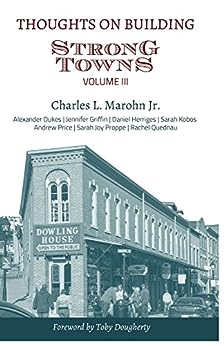 2.3 out of 5 stars
2.3 out of 5
3 global ratings
How are ratings calculated?
To calculate the overall star rating and percentage breakdown by star, we don’t use a simple average. Instead, our system considers things like how recent a review is and if the reviewer bought the item on Amazon. It also analyzes reviews to verify trustworthiness.
Top reviews

Michael Lewyn
VINE VOICE
5.0 out of 5 stars interesting
Reviewed in the United States on March 22, 2018
This is a set of essays from the Strong Towns website (strongtowns.org); most of it is focused on the problems of smaller cities. Some of the best essays include:

*one by Daniel Herriges explaining the problem of NIMBYism; Herriges points out that the neighbors of new housing might suffer a little from new homes nearby (because of congestion) but actually benefit from development in other neighborhoods just a bit further away, because new residents will be customers for local businesses. Thus, what is rational for each individual neighborhood (opposing new housing) is irrational for the city as a whole. However, Herriges seems to believe that this problem is worse in car-dependent places- something that I very much doubt is true, given the high housing costs of walkable New York and San Francisco.

*Chuck Marohn's essay arguing that traffic stops by police should be replaced by technology-oriented means of enforcing traffic laws. Marohn argues that traffic stops are dangerous both for the police (because the person they stop may be someone perfectly ready to murder them) and for citizens (who risk being shot by trigger-happy police).

*Marohn's essays on infrastructure; he repeatedly argues that some new infrastructure is counterproductive, because the short-term benefits of new growth are canceled out by the long-term costs of maintaining infrastructure. For example, he notes that in Lafayette, La. the amount of sewer pipes per person has increased by a factor of ten since 1949- far ahead of population and real income. (On the other hand, Marohn doesn't supply much evidence that this sort of infrastructure is a huge part of municipal budgets compared to other rapidly rising expenditures, such as pensions for city employees). Roads are even more harmful, because their benefits are reduced not just by the cost of maintenance, but by the cost of traffic delays arising from construction and maintenance, and the debilitation of neighborhoods abandoned when roads encourage population to shift to suburbia.
Read more
2 people found this helpful
Helpful
Comment Report abuse

t0wnp1ann3r
5.0 out of 5 stars Another solid collection from Chuck Marohn and other Strong Towns contributors
Reviewed in the United States on December 11, 2017
Like the previous two collections from Strong Towns, this book brings together a few threads from the organization's website and arranges them for a solid, impactful read. I like how this one carries through a few series on specific subjects and allows you to focus intensely before moving on to other parts of the collection.
In the interest of transparency, I am a member of Strong Towns and I volunteered to do some copy editing of this book before it was published for grammar and errors, but I did not write any of it or receive any payment.
Read more
Helpful
Comment Report abuse
See all reviews