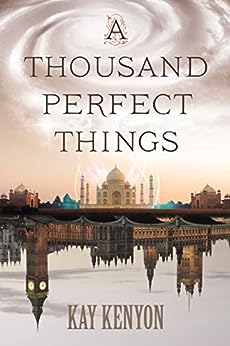 “This has become my favorite of all Kay Kenyon’s books. The science-driven men of Anglica have constructed a marvel of engineering—a bridge that crosses the ocean—but they don’t understand the mystical forces they’re facing in the dangerously seductive country of Bharata. As usual, Kenyon offers flawless world-building and a diverse cast of characters driven by conflicting and wholly believable desires. This is a rich, gorgeous, and marvelously detailed tapestry of a book.”
-- Sharon Shinn, Author of Troubled Waters and Royal Airs

""Kay Kenyon has once again created a world into which one blissfully disappears, replete with magic and monsters, romance and reigning dynasties, set upon the fragile social scaffolding of mid-nineteenth century England. The story is, literally and figuratively, a bridge between the mystical and the very real, with a young heroine who a delivers a deliciously vicarious ride. Brilliantly told with elegant yet occasionally jarring prose, A Thousand Perfect Things is a masterwork from the mind of one of our best authors of compelling alternate realities.""
-- Larry Brooks, Author of Story Engineering
--This text refers to an alternate kindle_edition edition.

Kay Kenyon is the author of eleven science fiction and fantasy novels, including A Thousand Perfect Things. She is the author of the critically acclaimed science fiction quartet, The Entire and The Rose. Bright of the Sky was among PW's top 150 books of 2007. The series has twice been shortlisted for the ALA Reading List awards and three times for the Endeavour Award. Four of her novels have been translated into French, Spanish and Czech. Along with her novels Tropic of Creation and Maximum Ice, two of the works in the quartet received starred reviews from PW.
--This text refers to an alternate kindle_edition edition.

brudigia
4.0 out of 5 stars a nice blend
Reviewed in the United States on December 6, 2014
Verified Purchase
How can this book be catalogued? Steampunk, fantasy, alternative history ? Probably all of them together. In a universe where England (Anglica) and India (Bharati) are divided by a great ocean, the Ansific, which can be crossed only by ships, and inhabited by wild kraken, the scientific Anglica has built a bridge to cross the ocean. It takes three months to cross it, to arrive in a continent much like 19th century India, as Anglica is the replica of 19th century England.
Tori (Astoria) Harding is a girl fascinated by science, educated by her grandfather who was in Bharati many years in the past, and had the possibility to see the Golden Lotus, or some remnant of it. A symbol, some say, of spiritual greatness, some other say it can do miracles. Bharati is home to magic, as Anglica is home to science. The two are in contrast and do not appear to be compatible.
Here lies the story of a journey to Bharati, of the dream of a United Bharati and the disillusion of Anglica over a possible client state.
Magic wreaks havoc in Anglica and as a consequence an army is sent there, but things do not go as foreseen. A bleeding prince, Jai shows Tori what the future could be, a sadhu, Mahindra dreams of a United Bharati and tries to make it true, a very simpictic girl Elizabeth tries to be a teacher to Bharati children, Edmond Muir-Smith is a soldier who falls in love with one of the Hardings girls. hopelessly ? Well, read on and you shall learn
All in all a very good book, nicely detailed and with very good personalities who grow and mature during the story. It takes a quarter of the book before the story starts to move, when the characters arrive to Bharati to find their future and also some alternatives which might and might come to actual life.
Sometimes the tale is crude, but such is life.
Very enjoyable, worth the time to read it.

Evelyn Puerto
VINE VOICE
4.0 out of 5 stars Very Imaginative
Reviewed in the United States on September 27, 2013
Verified Purchase
Another genre I tried this month was a sub-genre of fantasy: alternative history. A Thousand Perfect Things is set almost 200 years ago, in a world with just two continents separated by a vast ocean. Tori, the heroine, lives in Anglica, a culture of science and reason, somewhat modeled after Britain. Recently a very long bridge was constructed that connects Anglica with Bharata, an India-like land of magic. Based on her grandfather's last words, Tori travels to Bharata to find a mythical golden lotus, and there encounters a clash of the two worlds. It took me a little while to get into this book, but the imaginative story and beautiful writing kept me going. After a while, I couldn't put it down.
Read more
4 people found this helpful
Helpful
Report abuse

Kindle Customer
3.0 out of 5 stars good start, poor finish
Reviewed in the United States on October 31, 2014
Verified Purchase
for the first half of this book I couldn't wait to write a glowing review. things began to lag after that, and then the story basically lost track of itself to get lost in events that should have stayed on the periphery. the ending was not satisfying, being way too pat for the fairly emotionally realistic scenario the author created. the writing is beautiful, the imagination intriguing. unfortunately, the story telling is sorely lacking. enough so that I would hesitate before reading another book by this author.
Read more
2 people found this helpful
Helpful
Report abuse

Blue Moon
5.0 out of 5 stars Fantastic!
Reviewed in the United States on October 5, 2013
Verified Purchase
I loved this book. It is a fabulous work of imagination with vividly realized characters and a rather astonishing plot. I believe part of it is loosely based on The Mutiny in India. Not to spoil anything here.

I was utterly transported to another world, lead by the author on an amazing journey. The characters and the world have stuck with me along with questions about the dichotomy of magic and science which is skillfully and entertainingly explored.

This is my first book by Kay Kenyon. I read that it is her first effort at fantasy and I sincerely hope it will not be her last!
Read more
Helpful
Report abuse

jimdz
5.0 out of 5 stars More than a Thousand Perfect Words
Reviewed in the United States on September 27, 2013
Verified Purchase
If you've ever had the joy of reading a Kay Kenyon book I can assure you will enjoy reading this one too. Frankly, I'm not sure what I love about these books but I'll try to explain.

Detailed story telling, very well developed characters, a little bit of the magical and mystical, a story that continually propels you forward making you eager to turn each page and so much more.

And for those of you who enjoyed The Entire and The Rose, a very small hint of "braids".

My favorite line in the book: "And sometimes knowing real from conjured, or desire from reality was a most challenging matter of being willing to see."
Read more
Helpful
Report abuse

K. Springs
4.0 out of 5 stars Facinating Tale
Reviewed in the United States on November 11, 2013
Verified Purchase
In an alternate world, with an equivalent of the British Empire in India, Kay Kenyon as spun a tail of science and magic. Astoria (Tori) Harding is a woman wishing to be a scientist in a world mimicking 19th Century England, where woman are rarely allowed to become scientists. She travels to the Indian realm to find the Golden Lotus and finds a world of intrigue, suspision, and hatred.

Tomorrowtoday
5.0 out of 5 stars Another hit for Kenyon!
Reviewed in the United States on March 25, 2014
Verified Purchase
I love Kay Kenyon's writing. She paints a picture with words. In "A Thousand Perfect Things" Kenyon shifts gears from sci/fi to fantasy and creates an alternate 19th century world with characters so real that I felt like I had known them forever. The author's "Bright of the Sky" series remains my favorite science fiction work. I usually avoid fantasy, but ATPT opened my eyes to this genre.
Read more
Helpful
Report abuse

Kfarver
5.0 out of 5 stars Good Read
Reviewed in the United States on July 26, 2016
Verified Purchase
Fascinating concept, good plot, great characters, good writing. I lost myself in the story. I worried for the heroine. I couldn't wait to see what happened next and was sorry when it ended.
Read more
Helpful
Report abuse
See all reviews

Rocky Hudson
5.0 out of 5 stars Escapism
Reviewed in the United Kingdom on March 2, 2017
Verified Purchase
I am glad a friend recommended this novel. An alternative Victorian earth (with just two continents was perfect to escape into. The protagonist was fantastic, a strong and intelligent female lead for this feminist novel.
Read more
Report abuse
See all reviews
Back to top
Get to Know Us
Make Money with Us
Amazon Payment Products
Let Us Help You
EnglishChoose a language for shopping. United StatesChoose a country/region for shopping.
© 1996-2021, Amazon.com, Inc. or its affiliates