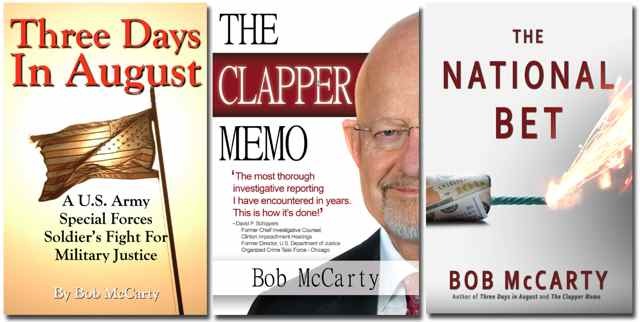 by Bob McCarty (Author)
4.0 out of 5 stars 32 ratings
See all formats and editions
Sorry, there was a problem loading this page. Try again.

Bob McCarty is the author of one romantic-comedy screenplay, Apply Online (March 2015); one crime-fiction novel, The National Bet (November 2014); and two nonfiction books, The Clapper Memo (May 2013) and Three Days In August (October 2011).

A native of Enid, Oklahoma, Bob graduated from Oklahoma State University with a degree in journalism in 1984. During the next two decades, he served stints as an Air Force public affairs officer, a political campaign manager, a technology sales consultant and a public relations professional.

Bob completed his first screenplay, Apply Online, in March 2015. Stay tuned for details as he works to sell this romantic comedy script to Hollywood.

In Bob's first crime-fiction novel, The National Bet (November 2014), FBI Special Agent "Joe-L" Wilson leads the investigation into the mysterious deaths of thousands of Americans during the Fourth of July weekend. The biggest challenge of Joe-L's law enforcement career, the investigation becomes personal for him after he realizes he shares one thing in common with those who died: The National Bet.

In Bob's second nonfiction book, The Clapper Memo (May 2013), he offers irrefutable evidence of an unconventional war being waged by polygraph loyalists against all challengers to their century-old credibility assessment technology. Among those involved in this "turf war" is Director of National Intelligence James R. Clapper Jr., the nation's top intelligence official.

Bob is married, has three sons and two cats, and lives in the St. Louis area.

Bob is available for media and blogger interviews. Contact him via email at bobmccartywrites (at) gmail (dot) com. He'll try to respond as soon as possible.

4.0 out of 5 stars
4 out of 5
32 global ratings
How customer reviews and ratings work

RON ENGLISH
5.0 out of 5 stars Soldier Railroaded to Prison by Charges of Perverted Sex, Physical Roughness and a Tale Untrue
Reviewed in the United States 🇺🇸 on April 9, 2012
Verified Purchase
I have read every word in Bob McCarty's 283-page barn-burner, "Three Days in August," featuring a military trial gone a muck where one of America's finest Special Forces service men was falsely painted as a monster of perversion, hard sex torture, physical violence and subjected to a tainted trial by Americans in a venue where he should have found true justice, but didn't come close to getting it.

When the victim in this narrative readily admits she left a club where she and this soldier were having a good time to go with him to his hotel. Her stated reason for going with him was, her words, "to have a one-night stand of sex." There was nothing in Army Special Forces Sergeant First Class Kelly A. Stewart's past history to even hint he would likely do the things this young woman charged.

I hope many of you will read this report and add your testimony to those of us who are not convinced of the Sgt.'s guilt. He put his life on the line again and again for his country, for his fellow warriors and served in one of the hottest war zones where he was under constant threats from flying bullets and roadside bombs only to be let down by the very system that called him into service. A ghastly shame greater than the charges of evil brought by this young woman.

Sgt. Stewart was an amazing soldier and he served his country with honor and repeated bravery for which he was decorated. He had many fellow warriors to testify to his character. His father was a military man of honor and never doubted his son. The Sgt.'s one mistake, which he never attempted to hide, was cheat this one time on his wife and go to that motel with this woman for the purpose of sex. His wife, herself a soldier serving away at the time, stands by him, his family never forsook him and his fellow soldiers never lost faith. But the military justice system failed this good man. You will find it difficult to believe what he had to endure at the hands of the military justice system as he was jostled and bound in double handcuffs, no shoes, no socks and only a hospital gown to cover his body as he was forced into public rental car agencies, airports and civilian airplanes;Paraded before fellow military men and women.

I strongly recommend this book. Parents should place a copy in the hands of any child leaving home to serve in the military. This account just might give one pause before straying off the straight and narrow.

bcallaway
5.0 out of 5 stars A story of a warrior left behind
Reviewed in the United States 🇺🇸 on January 7, 2012
Verified Purchase
Rarely do we get the opportunity to go back in time and un-do a bad decision. Sergeant First Class Kelly Stewart could not have imagined all of the consequences that would be the result of a night of indescretion and infidelity. However, the treatment of SFC Stewart by the military justice system is beyond disturbing. I cannot fathom a conviction based on the lone testimony of a woman with a questionable psychological background. I cannot fathom a conviction with no medical or physical evidence being presented. I cannot fathom a conviction with no corroborating testimony and I cannot fathom the treatment that SFC Kelly received not only on foreign soil, but even in the shameful way he was tranported to Fort Leavenworth, Kansas.

Bob McCarty does a great job of telling SFC Kelly's story along with the actual court martial testimony and inner workings of a system that truly let down one our country's true warriors.

A poor life decision? Absolutely, without question. But our fighting military deserves better than this. Thank you for bringing this story to light, Bob. Well written and meticulously researched.
Read more
3 people found this helpful
Helpful
Report abuse

Daniel H Wilson
5.0 out of 5 stars Travesty of military justice!
Reviewed in the United States 🇺🇸 on March 6, 2021
Verified Purchase
This brilliant description of the case, exposes the many injustices in the military legal system. In today’s military, an accusing finger means you’re guilty, then they prove you guilty at a court martial. A complete overhaul of the military’s legal system is required. Justice needs to be restored to the military justice system!
Read more
Helpful
Report abuse

brian m.
3.0 out of 5 stars dull book
Reviewed in the United States 🇺🇸 on May 23, 2014
Verified Purchase
If you wanted to read a book with intricate he said and she said points of view of a sexual encounter, look no further. I have no idea how this ever became a book or was published. The military would have done just as well to move SFC Kelly out of Germany and discharge him for infidelity than to screw over one of its own special warfare personnel and imprison him with no evidence whatsoever, based solely on the say so of a woman with certified mental problems. Great job to the chain of command to screw over another innocent gi just to appease someone else. No I'm not proud of my military or government. They're weak minded cowards.
Read more
Helpful
Report abuse

Guns Up
5.0 out of 5 stars Semper Fi
Reviewed in the United States 🇺🇸 on November 2, 2011
Verified Purchase
I just finished reading Three Days in August by Bob McCarty. As a former Marine, police officer, college professor, and criminologist, this prosecution does not pass the smell test. I'm appalled at the treatment received by Sargeant First Class Kelly Stewart. The odor from this prosecution is worse than the odor of death from Guadalcanal,Tarawa, Peleliu, Iwo Jima and Okinawa combined. For a warrior like SFC Stewart, who has done too much for his country, as a Green Beret, to be railroaded and treated in such a blatant manner by the army is indefensible. Come on, army! you have better Officers and NCOs than this! Do the right thing! Steward should have his conviction overturned! Thank you for spelling out this tragedy of justice so well, Mr. McCarty. Thank you for your service, FSC Stewart!
Semper Fi De Oppresso Liber
Read more
3 people found this helpful
Helpful
Report abuse

Kindle Customer
4.0 out of 5 stars Three days in August
Reviewed in the United States 🇺🇸 on April 24, 2015
Verified Purchase
A sad report on the four hours that a gifted warrior has his army career destroyed. A mentally disturbed woman, a dysfunctional military legal system and political correctness conspire against him. Thank goodness for an author who is prepared to bring these facts to the attention of the general public. Better editing would have gained five stars.
Read more
One person found this helpful
Helpful
Report abuse
See all reviews