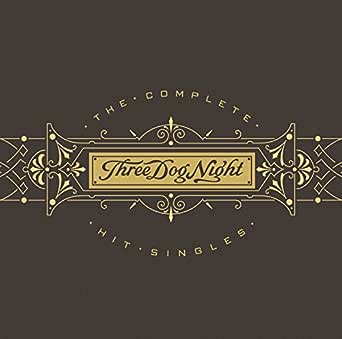 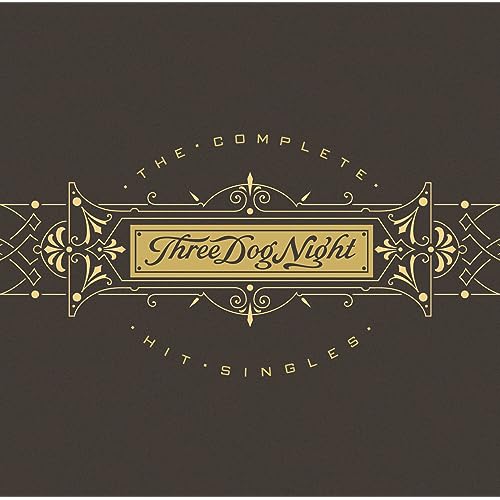 4.8 out of 5 stars
4.8 out of 5
1,167 global ratings
How are ratings calculated?
To calculate the overall star rating and percentage breakdown by star, we don’t use a simple average. Instead, our system considers things like how recent a review is and if the reviewer bought the item on Amazon. It also analyzes reviews to verify trustworthiness.

Allen SmallingTop Contributor: Classical Music
TOP 500 REVIEWER
5.0 out of 5 stars Don't "Hide your heart" -- Have a listen!
Reviewed in the United States on February 20, 2017
Verified Purchase
From the very late Sixties to the mid-Seventies, the group known as Three Dog Night were a steady presence on the Billboard Top 40. Not only that, they gave early exposure to songwriters like Laura Nyro, Hoyt Axton, Paul Williams, Randy Newman, Harry Nilsson and Leo Sayers. Unlike some products of the Disco era to come, these infectious chart-toppers do not sound dated, just vibrant, poppy, fun and (frequently) quite danceable. THE COMPLETE HIT SINGLES CD is well engineered and well worth the money.
Read more
21 people found this helpful
Helpful
Comment Report abuse

C. J. Schafer
1.0 out of 5 stars HARSH
Reviewed in the United States on July 15, 2020
Verified Purchase
I'm not an audiophile but I do have a real stereo. A modern amplifier and a modern CD player and 2 large speakers. I run my CD signal through a tube buffer and a BBE Sonic Maximizer (which I can bypass). This CD was harsh from the very first song, it's the way it was engineered, not the band. I was in high school when this group was on top of the charts so I knew these songs ahead of time. I will say that the songs on the end of the CD were not as bad as the ones at the start. Too bad as their biggest hits are at the start. Seldom (well never) has an album been so hard to listen to, and I have about a thousand of them. Oh, and I am use to monaural too. I'll give it another play as I have more adjustments I can try. Maybe this CD is okay on a boom box or through ear buds or in a car but I am not too hopeful for it on a stereo that is anything at all like we aspired to have back in the 70's.
Read more
4 people found this helpful
Helpful
Comment Report abuse

Flugelhornet
2.0 out of 5 stars Very, very disappointed in sound quality, although song selection is good
Reviewed in the United States on June 25, 2017
Verified Purchase
Good songs, but the sound quality is terrible, particularly beginning with track 9 (Joy to the World), which was fuzzy all the way through. Some tracks sounded like they were being broadcast from a distant AM station. Also, the vocals seemed muted in comparison to the instruments. I took the CD out of my player to see if scratches might be the source of the fuzziness, but I could see none.

I'd return this CD if it wouldn't cost me more to do so than to keep it.

mikes
4.0 out of 5 stars Three Dog Night Any Night
Reviewed in the United States on March 14, 2017
Verified Purchase
This CD gives a good overview of this very talented band's singles catalog. Clearly, their earlier work was more edgy and progressive than their later singles, which had much more of a pop feel. I liked that the songs are presented in chronological order. The recording quality is very good for 1970's music. TDN was unusual in that they had more than one lead singer, although Chuck Negron sang lead on many of their best known tunes. They were also unusual in that they did not write songs themselves. Overall, this is a fine legacy CD for anyone who likes good vocal harmonies and good musicianship.
Read more
14 people found this helpful
Helpful
Comment Report abuse

music_monger
5.0 out of 5 stars The Show must go on a great place to start!!!
Reviewed in the United States on February 11, 2016
Verified Purchase
If you were ever going to limit yourself to a singular 3 Dog Night release to have in your collection, this should be considered as worthy to be the one. Everything that AM commercial radio managed to stretch into their playlists, this release has it all and the best sound mastered (imho) of all their compilations at least up and perhaps beyond this 2004 release. A wonderful chunk of defining and memorable 70's hits by a respectable group of professionals, both singers and musicians, with integrity in their art and dynamic musical output that resonates still. I got this as MP3 download vs the CD for $5, a resounding bargain!
Read more
10 people found this helpful
Helpful
Comment Report abuse

Robert Balcom
5.0 out of 5 stars I love this music!
Reviewed in the United States on April 23, 2016
Verified Purchase
This purchase was a terrific value. I've enjoyed Three Dog Night's music ever since their hits were first playing on KHJ-LA AM radio back in the early 70s, but for some reason I never bought any of their albums. I am overjoyed with this purchase. It has all of the old hits that I remember plus a couple of other songs that I hadn't previously heard. There is not a bad song on this album. When I pop the disk into my car's CD player the music is so good that I just want to drive and drive. It took me 45 years to get around to buying my first Three Dog Night album, but I'm incredibly happy that I did. Better late than never!
Read more
12 people found this helpful
Helpful
Comment Report abuse

Jimmy James
5.0 out of 5 stars 3 Dog Hits
Reviewed in the United States on October 18, 2018
Verified Purchase
Read 3 Dog Nightmare this year. Finally got a copy. Had to revisit the music and this was a great way to do it. These guys had a no fail formula for making pop hits that worked for like 10 years. They sold 50 MILLION records. Thats a lot vinyl boys and girls. And they never wrote any of the (hit) songs. Love em or hate, they could sing their butts off and were a force to be reckoned with. This is great greatest hits package. Put on your bell bottoms and your platform shoes and sing along with Chuck, Cory and Danny.
Read more
2 people found this helpful
Helpful
Comment Report abuse

JB - A Guy
5.0 out of 5 stars This Music Still Stands Up
Reviewed in the United States on October 2, 2013
Verified Purchase
This is a great collection of great music. No dogs here. I saw Three Dog Night in Nashville in an intimate venue - the Wild Horse Saloon - this past summer (2013) and was thoroughly entertained. I had forgotten how much of their music I knew from my junior high and high school era. They were the number one selling band for several years and cranked out hit after hit. A lot of bands have a certain sound and all of their music begins to sound the same. Three Dog Night does not suffer from that ailment, and I had forgotten that all of these were their hits. If you are a child of the 70s, or just love that music, this needs to be in your collection.
Read more
7 people found this helpful
Helpful
Comment Report abuse
See all reviews

Mark Barry
4.0 out of 5 stars "...Want Some Whisky In Your Water...Sugar In Your Tea..." - The Complete Hit Singles by THREE DOG NIGHT (2004 CD Remasters)
Reviewed in the United Kingdom on May 29, 2008
Verified Purchase
On a very cold evening in the Australian outback, an Aborigine hunter would dig a furrow in the ground and bring his dog into the hole with him for bodily warmth. Two dogs were needed for a really bitter night, but the worst night of all was called a THREE DOG NIGHT. Not sure anyone needed to know that - but anyway that's how the band got their name...

As a rock group with worldwide record sales of over 50 million - THREE DOG NIGHT were a genuine chart phenomenon – especially in the States where they released 23 singles on the Dunhill/ABC label between 1968 and 1976. No less than 21 of them charted in the Top 200 (they were handled by Stateside and Probe in the UK and Europe) and it’s they that are represented here - and in truly fantastic Erick Labson Remastered sound quality.

UK released April 2004 - "The Complete Hit Singles" by THREE DOG NIGHT on Geffen/UTV Records B0001779-02 (Barcode 602498614709) features specific American 7" single mixes recorded precisely for that purpose (many are cover versions and had alternate lead vocalists or combinations of all three). Here’s a detailed breakdown of what’s what (74:32 minutes):

96K/24-Bit Remastered by ERICK LABSON of Universal from the original tapes, the sound quality is BEAUTIFUL if such a word can be applied. I’ve waited years to hear non-hissy clean CD versions of "Mama Told Me (Not To Come)", "Out In The Country" and "Joy To The World" – and this set delivers them in spades. The CLEAR SOUND is startling and makes you reassess each song.

It's not all peaches and cream of course – some of the songs like "Black & White" and "Til The World Ends" have dated badly - while the truly cringing Leo Sayer song "The Show Must Go On" is beyond liking and the screeching vocal butchery of Laura Nyro's "Eli's Coming" is hard to bear. But then there's the slightly psych feel to "One Man Band" and the lovely David Cassidy-sounding "Pieces Of April" - both forgotten oldies worth rediscovering. "Shambala" and "Let Me Serenade You" are not that commonly known on this side of the pond either - and again - deserve rehearing. And then there's that superb Audio Quality on all the tracks - just gorgeous.

THREE DOG NIGHT was a hugely likeable American Rock band and this run of wickedly good 45s only proves why they were so popular. A must-have for fans then - or just a great sounding CD addition to your ample music shelves for lovers of that 60’s/70’s sound...
Read more
22 people found this helpful
Report abuse

Steve Blight
4.0 out of 5 stars Four Stars
Reviewed in the United Kingdom on March 8, 2016
Verified Purchase
Good collection of their singles, all you need really.
Read more
Report abuse