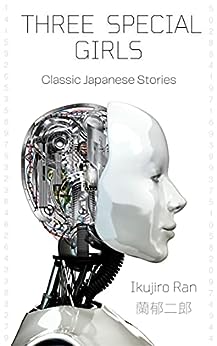 Jan Moens
4.0 out of 5 stars Les travelled paths in translations of Japanese literature
Reviewed in the United States on October 5, 2021
Verified Purchase
More and more contemporary Japanese authors are being translated into Western languages. With the older generations, not mentioning the ‘canonical’ names, this is much lesser so. Especially when we speak of so-called "popular" literature or pulp literature, like the detective, horror or sciencefiction genres. Names like Edogawa Ranpō, Yokomizo Seishi or Kōga Saburō might ring a bell for some people, but those who know names like Yumeno Kyūsaku, Unno Jūza or Ōsaka Keikichi may call themselves true afficionados.

The English translation of three short stories written by Ran Ikujirō is a welcome addition to what is on offer. "The Brainwave Manipulator" and "The Girl with Platinum Nerves" are fine examples of the work of this author, who unfortunately died far too young.

All three stories can be considered both to be sciencefiction and ‘soft’ horror. They are examples of good, ingenious entertainment literature and they show how early modern Japanese writers sought to connect with their Western equivalents such as Edgar Allen Poe, Arthur Conan Doyle or Maurice Leblanc.

The translations here not only do full justice to the originals, they offer the reader a broader look into the popular literature of 1920s and 1930s Japan. "The Brainwave Manipulator " and " The Girls with Platinum Nerves " appealed to me most because they can be placed in the ‘hard’ SF genre. "A chronicle of Sleep Erosion" then again reminded me more of the darker stories by Edogawa Ranpo. It is a fine example of the « Ero-guro-nonsense » period in Japanese literature.

I am already looking forward to new publications at Arigatai Books
Read more
Helpful
Report abuse
See all reviews
Back to top
Get to Know Us
Make Money with Us
Amazon Payment Products
Let Us Help You
EnglishChoose a language for shopping. United StatesChoose a country/region for shopping.
© 1996-2021, Amazon.com, Inc. or its affiliates