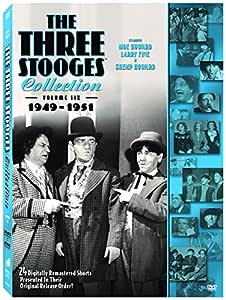 The Three Stooges return with the next 24 digtially remastered shorts covering the years 1949-1951 in this sixth collection, which continues with Shemp as the third Stooge, who had stepped in two years earlier to fill the shoes left empty when Curly became ill and retired. This collection contains such classics as MERRY MAVERICKS (1951), a reworking of PHONY EXPRESS (1943) featuring Red Morgan and his gang of bandits; SELF MADE MAIDS (1950), in which the Stooges not only play themselves but assume the roles of their fiances, their fiances father (played by Moe) and their three babies; and DON'T THROW THAT KNIFE (1951), which features Larry, Moe and Shemp in brilliant improvisation with nothing but household items while confined to a single room. The Three Stooges Collection Volume 6 showcases Larry, Moe and Shemp at their best - and things just keep getting better!

4.8 out of 5 stars
4.8 out of 5
264 global ratings
How are ratings calculated?
To calculate the overall star rating and percentage breakdown by star, we don’t use a simple average. Instead, our system considers things like how recent a review is and if the reviewer bought the item on Amazon. It also analyzes reviews to verify trustworthiness.
Top reviews

football fan
4.0 out of 5 stars Typical Three Stoogies Humor.
Reviewed in the United States on October 19, 2015
Verified Purchase
The Three Knuckleheads, oops I mean The Three Stoogies, have their own brand, style, fashion of doing their own comedies as they perform in this short, silly, absurd comedy.

No one like the Three Stoogies. They are tough to imitate. Only the cartoons like the Simpson's itchy and Scratchy come close to duplicating the art of comedy performed by the trio. This one, Malice in the Palace, is with Shemp, no Curly, but Moe and Larry are still there. Shemp is a good substitute for Curly. Instead of substitute I should say a punching, patsy, gag bag. He's a good fall guy for Moe's outrageous, funny anger outbursts.

It's tough to top this trio for slapstick, and ridiculous, humor. There's a gag every second. Nonetheless, the trio are inventives. They have a new kind of humor up their sleeves all the time. Usually involving smacking, slapping, or shaking.

The diners then mistaken, misinterpreted, misunderstand what they had heard for what they see on their table: hot dogs A laugh a second.

What makes the trio so hilarious are gags by clowns dressed up as normal, everyday people. As clowns they are hysterically funny yet they don't wear the customs of clowns: big shoes, cone-shaped hats, red noses. They work best when the viewers see them as dunces, clowns, pure Knuckleheads but dressed up normally.

Nonetheless, what the Three Stoogies do is so unlike the performances by other comedians. There is simply no one like them. They were absolutely originals. Unfortunately, however they were also difficult to imitate. Except for cartoons, where they were often imitated.

As the saying goes, imitation is the most sincere form of flattery. And a lot of animated humor is based on The Three Stoogies.

If there is one fault I find with their humor, sometimes they are too silly, too comical, too absurd. In watching them for years, I have found many either like or hate them.There's no middle ground when it comes to the Three Stoogies.Personally, I like them; I like their style of humor.

drunkspider
4.0 out of 5 stars 4 stars
Reviewed in the United States on June 17, 2018
Verified Purchase
A bit stale in places [not a lot of eye pokes and slaps] as it seems its for you the viewer to understand the plot/ story rather than, or in addition to the comedy the trio dispense to each other. Not to mention some of the long standing jokes are repeated throughout the series; and that gets old very fast. But lets face it; its the Three Stooges. 4 stars.
Read more
2 people found this helpful
Helpful
Report abuse

M. G. Smith
3.0 out of 5 stars Not the Stooges' Best Work - But Good for Die-Hard Fans
Reviewed in the United States on April 20, 2016
Verified Purchase
First, don't be deceived by the illustration for this short. The illustration is from an entirely different episode - "Three Little Pirates," I believe - with the classic "Maha" - "Aha" routine. This episode also involves a Middle Eastern theme… though a very different one. The Larry-as-restaurant-cook scene is classic Stooges - and one of those moments when Larry is more than just a prop for Moe's anger or Shemp's klutziness. (Yes. In spite of the illustration, Curly does not appear in this episode.)

This isn't one of the Stooges' best shorts. Or even one of their best with Shemp. But it offers enough of their trademark slapstick to satisfy most die-hard fans. And, well, you may never look at hot dogs quite the same way again… Woof!
Read more
One person found this helpful
Helpful
Report abuse

Paul Carruthers
5.0 out of 5 stars The Shemp era stooges at the height of their powers....
Reviewed in the United States on December 6, 2012
Verified Purchase
Without doubt, the best collection of Moe, Larry and Shemp short films. Volume 5 is marred by the year 1946 and the weakness of the "sick" era Curly films. Volume 7 has the "Shemp recycle" films holding it back, but here there are no such problems. The Shemp era stooges are at the height of their powers, long before the encroachment of television, one day shooting schedules and stock footage would become the pox on their short film careers.

Maybe the best short of the entire collection is the hilarious "Scrambled Brains" directed by Jules White, who seems to get knocked by a lot of stooge fans, but I think he was a terrific director and most of his Shemp output is classic stuff to me. "Scrambled" has the plot of a mentally ill Shemp Howard who hallucinates that a homely (to put it mildly) hospital nurse is actually a shapely blonde dish who he intends to marry. Among Shemp's other hallucinations is that he has an extra pair of hands when he's playing at the piano. Also, watch for that hilarious phone booth scene when all 3 stooges are crammed in there with great stooge foil Vernon Dent. Laugh out loud hilarity.

Also included on this set are greats such as "Who Done It?", "Fuelin' Around", "Malice in the Palace", and the great remake "Pest Man Wins" which almost tops the original Curly classic "Ants in the Pantry".

No Shemp fan, heck, no stooge fan can go wrong with this mighty impressive collection of shorts. 5 stars all the way.
Read more
2 people found this helpful
Helpful
Report abuse
See all reviews

Mr. Lyndon Sparkes
5.0 out of 5 stars Cinema heaven
Reviewed in the United Kingdom on August 27, 2009
Verified Purchase
I bought this DVD based on what other reviewers have said. I wasn`t disappointed. I have created a home cinema in a garage with a 78 inch screen and a projector with an image throw of some 16 feet. For the screen image to be sharp and the sound quality to be good the DVD print must be very good, this print is very good. I shall be buying others in the series.
Read more
Report abuse