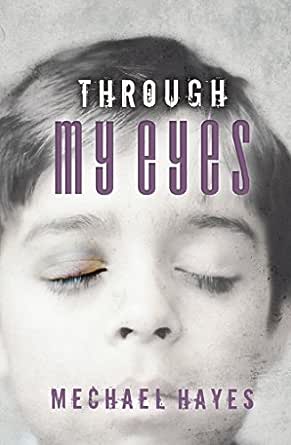 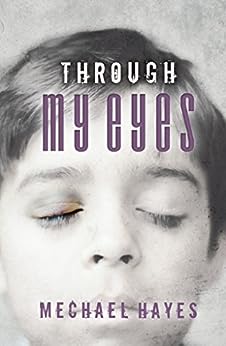 Through My Eyes Kindle Edition

Mechael Hayes did not finish high school, and he lived a lonely life. He distanced himself from family and had difficulty making and keeping friends. He struggled against depression for years until finally taking control of his own life. Through My Eyes is his story.

missmickee-bookreview
5.0 out of 5 stars Survival: A Story of Neglect, Physical Abuse, and Violence...
September 6, 2016
Format: Kindle EditionVerified Purchase
"Through My Eyes" is an engrossing captivating short debut memoir written by Mechael Hayes, recalling extreme physical and emotional childhood abuse that often included assault and severe injuries. In part, he shares his shocking story not to gain sympathy, rather uses writing as a form of therapeutic healing. Often he would feel like a "Zombie" unable to connect with others, deeply scared by his abusive past; and yet refused to be defined by what had happened to him, and a fulfilling life remained a possibility.

Raised by his great-grandparents, both alcoholics, in a trashed blighted Detroit, MI. neighborhood. Although his father lived on the same street, he abandoned his son. Hayes credits his grandfather George, a large kind/gentle man, for any goodness he may have learned. A mean drunk, his grandmother would smack him for the slightest misdeed of a typical childhood mishap. Hayes tells the story of finding a pretty white woman's nude body in an alley, and poking it with a stick. Brutality and violence were so common, he was "desensitized" to it.
Eventually his mother would return, and move him and his younger brother to Evanston, Illinois. For a time the young family was happy, and Hayes went to a nice school and did exceptionally well. Everything changed with the arrival of Phil, after his discharge from prison. Phil was a large black monster of a man. Instantly, he knew life would never be the same again, he was right. It wasn't until Hayes was in high school that he was able to escape and leave the abuse and violence behind, never looking back. Highly recommended!

98Christlife
5.0 out of 5 stars Very touching
October 20, 2016
Format: Kindle EditionVerified Purchase
I thank the author for having the courage to tell this story with hopes of helping someone else. Abuse does have a lingering effect on some. But to hear how someone else dealt with it can help the healing process. This story teaches us to be grateful and thankful for our up bringing , which some may have thought was so horrible. My heart goes out to this guy for all he sustained and was deprived of. Reading this story proves a known fact that your childhood has a lot to do with your adult life. When love and affection is missing from any relationship expect the views of that person not to be very high. As parents we are suppose to protect our children to the fullest, if we don't we're not worthy of being called a parent.
Read more
One person found this helpful
Helpful
Comment Report abuse

Mrs. Staff
5.0 out of 5 stars I Understand
November 2, 2016
Format: Kindle EditionVerified Purchase
I know your pain. I thought my own story was bad, until I read this one. I know abuse, and how it effects a person, but I do not know abuse to the extent this author knows it. I read this book in one sitting. I ordered it completely by accident. I was checking on my own book rankings. I clicked on this book to see what it was about, and accidentally clicked the one click purchase. I decided to read this story anyway. I do not like reading abuse stories, because they take back my own crap. Thank You for being brave enough to write your story. I can not imagine what you had to deal with, but I can understand everything you feel. Your writing is very rushed. I understand that as well. It is hard enough to live what we were dealt with. It is much harder to write it.
Read more
One person found this helpful
Helpful
Comment Report abuse

Heaven
5.0 out of 5 stars Sadly yet amazing
January 8, 2020
Format: Kindle EditionVerified Purchase
Man man man what can I say this book put me in the shoes of this writer while I read each sentence with tears in my eyes. I cant say Ive been through anything like this but I can say that God has his way of bringing us through things. Im just so thankful that God used you to help others. You are an angle and I pray that each day gets brighter and Brighter for you. This was a great and inspiring read. Keep it up "Gelo" much love always you know you😉
Read more
Helpful
Comment Report abuse

Joe Johnson
5.0 out of 5 stars I love the honesty.
August 26, 2016
Format: Kindle EditionVerified Purchase
In this day and age where everybody only shows their "perfect" self. Mechael puts himself out there, with society perceived flaws and all. Says here i am, this is why I was the way I was. And why I am the way I am. And to me that is true honesty, something we have in short supply these days. Much respect to Mechael and the courage it took to be this honest about who he is. Thank you.
Read more
3 people found this helpful
Helpful
Comment Report abuse

Neelam
5.0 out of 5 stars Inspiring.
October 21, 2016
Format: Kindle EditionVerified Purchase
A very touching narrative on the life of the author. I was very touched and inspired by this book.

The words of the author flow immensely drawing you into his life and experiencing various emotions with him.

A treasure to read and a hope for all those who are going through the same issue.
Read more
One person found this helpful
Helpful
Comment Report abuse

Tammy French
5.0 out of 5 stars Great short book
August 27, 2016
Format: Kindle EditionVerified Purchase
It pains me that you had to endure such abuse at the hands of another. Abuse is meant to break down one's will, glad that you found the strength to leave. I hope that this finds you still on the path to healing.
Read more
2 people found this helpful
Helpful
Comment Report abuse

Anna Charline Barnett
5.0 out of 5 stars Child Unloved
August 22, 2016
Format: Kindle EditionVerified Purchase
A sad story of a child with no love and feeling no hope. A man now wanting to share hope. I would recommend this to any one in need of hope and someone to share God with them.
Read more
One person found this helpful
Helpful
Comment Report abuse
See all 15 customer reviews
Write a customer review