Visit the Thule Store
4.4 out of 5 stars 56 ratings
| 68 answered questions
Currently unavailable.
We don't know when or if this item will be back in stock. 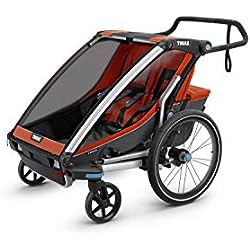 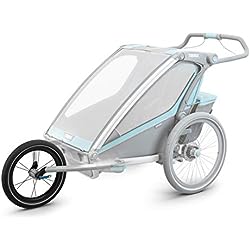 4.4 out of 5 stars
4.4 out of 5
56 customer ratings
How does Amazon calculate star ratings?
Amazon calculates a product’s star ratings based on a machine learned model instead of a raw data average. The model takes into account factors including the age of a rating, whether the ratings are from verified purchasers, and factors that establish reviewer trustworthiness.

Kevin Schubert
3.0 out of 5 stars Great carrier, NO VENTING WITH COVER ON
Reviewed in the United States on April 22, 2017
Verified Purchase
Received the chariot today. It's a beautiful thing. We did a ton of research on all Thule chariot carriers : cx, chinook, lite, cougar, and cross.

What we knew we wanted : suspension, seat recline, air flow, and obvious safety. The only one that meet all was the chinook, but it seems that it's been discontinued and we cannot find a chinook 2 anywhere! Whyyyy???

So we settled with the cross, don't get me wrong it has all the bell and whistle but I wish they side windows vent. WHY THULE? WHY DO THEY NOT VENT esp needed when the weather cover is on? For a $1000 carrier, with comfort and safety as priority, having a side window vent option would've been nice while biking With the weather cover on. Kids get hot and cranky and a hot and cranky kid can easily ruin the day. I wish it was love all the way, but will wait a few more months to fully use it to add additional comments.

Ava K Lamb
5.0 out of 5 stars Family fun . Don't wait!
Reviewed in the United States on September 8, 2017
Verified Purchase
Other reviewers seem disappointed with this purchase but I am not, at all. We purchased this item as an Amazon warehouse deal in very good condition but I would say the condition was like new with tags very clean everything the way it should be. That was a chance worth taking --saved several hundred dollars. My husband had no issue assembling it following the directions he said it was quite easy. Within minutes they were out biking in the nearby forest on the carriage trails. It started to rain badly and he fumbled with a cover a bit but none of it really affected the great ride . Our 4-year-old is tall and weighs 45 pounds our 1 and a half year-old is tall and heavy at 25 pounds. Our four-year-old is probably on or slightly above the height limit for this thing but she was comfortable, no issues. The shocks system works perfectly and there were no complaints from the children just enthusiastic cheering on their father. The carriage road is bumpy and there's a lot of uphill and there's a lot of downhill. It was a challenge for sure but my husband was able to do it. I followed behind and it was such a wonderful experience can't wait to keep doing this. We shouldn't have waited this long to throw down the money. It is a lot of money but there's just nothing like it. We live in the north east and are considering the ski attachment . I am planning on using it as a stroller this weekend at a Renaissance fair . Looking forward to not having to carry our older daughter when she gets tired we did not previously have a double stroller. Double stroller does very well on grass and bumpy terrain I have not purchased a jogging stroller attachment as of yet. Wish it came with the jogging stroller attachment instead of the walking stroller since that could easily do double duty. Definitely a money grab but at least it's included.Going downhill as a stroller yes I could really use a hand break but I don't feel like buying it. That adjustable handle is brilliant my husband is 6 foot eight so most things are just not built for him --this does pretty well .
Read more

Alexander
3.0 out of 5 stars Would not buy at full price
Reviewed in the United States on March 30, 2019
Verified Purchase
The trailer (as a frame) is fine - it's relatively light-weight and easy to operate (fold, attach wheels or tow bar). The only thing I'm questioning is the "seat" comform, if you can call it that. That's what - there is no seat - it's just a bench with small amount of padding on it and a harness. You look at Burley or Hamax and they have nice padded seats, where you can actually see the "seat". Here it is not the case. I'm yet to try their "baby supporter", which should be more or less the "seat" as in competitors' trailers, but some reviews say it's not a great fit in the Chariot.

I can barely imagine anybody buying this trailer for $1000, when you can get Burley D'Lite for less and it has very nice padded seats. New 2019 Hamax Outback should have reclining seats as well and all the reviews are saying that Hamax seats are far superior.

I've seen some reviews mention that hitch system is not as study as Burley, for example, and you can notice it when riding a bike. To be frank, on my e-bike I didn't even notice I was pulling anything. The only problem I have with the hitch adapter is that it's rather bulky and installing it over Shimano's non-turn washers barely leaves any room for the actual nut. You could probably remove the washer and just keep the hitch adapter, but with the amount of power I have running through that rear hub - I'd rather have non-turn washers on both sides.

Another thing that a lot of reviews are mentioning is that design of this trailer is very thought through, which I don't agree with. While it's easy to fold/unfold, you cannot do that with the tow bar attached to its side, for example. Venting is also a problem - I'd like to use rain cover more often than not, because otherwise the child is sitting right behind my back wheel and all the dust is going straight to his/her face, but with rain cover there is barely any airflow. I'll probably punch few holes in the side windows soon, just to remedy the situation, given that "designers" could not figure that out themselves.

Overall, it is an okay trailer, but way overpriced. Really, you can get a Burley D'Lite for about 400-500 bucks now, which is the same thing, with better seats. Hamax is another great option, where major complaint is the weight. Given that I have an e-bike and extra 2 kilos don't matter much - I wish I'd get new reclining Hamax instead. I think the net cost of this trailer is around 200 bucks, if not less.
Read more

basel alnabulsi
1.0 out of 5 stars Disappointed
Reviewed in Canada on March 12, 2020
Verified Purchase
It's an amazing stroller. But for some reason the two front wheel hinges started rusting. The wheel on the right started making noises. Tried contacting Amazon, but they said they it was outside the return period. A bit disappointed.
Read more
One person found this helpful
Helpful
Sending feedback...
Thank you for your feedback.
Sorry, we failed to record your vote. Please try again
Report abuse

Ian Flett
5.0 out of 5 stars Amazing quality
Reviewed in Canada on August 2, 2018
Verified Purchase
We're loving this trailer. It fits two toddlers comfortably. It's not as well ventilated on really hot days as we were hoping. But it's waterproof and our daughter loves to climb into it every chance she gets. Be careful of the cotter pin on the rubber strap for the hitch. We've already lost one.
Read more
2 people found this helpful
Helpful
Sending feedback...
Thank you for your feedback.
Sorry, we failed to record your vote. Please try again
Report abuse

A.N
5.0 out of 5 stars Five Stars
Reviewed in Canada on January 25, 2018
Verified Purchase
I love this Chariot, everything is so well thinking ! thank you
Read more
Helpful
Sending feedback...
Thank you for your feedback.
Sorry, we failed to record your vote. Please try again
Report abuse
Load more international reviews